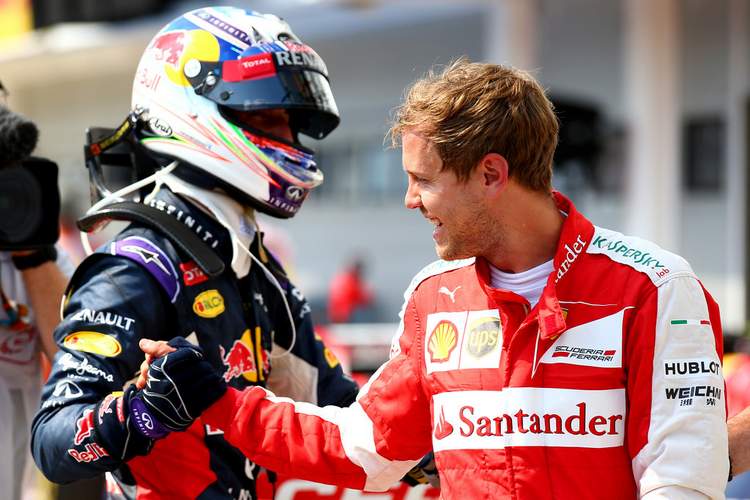 In the wake of Daniel Ricciardo’s brilliant victory of the Chinese Grand Prix, Italian media outlets are starting to call for Ferrari to sign the out of contract Red Bull driver to replace Kimi Raikkonen at the end of this season.

The Italian media are notoriously powerful when it comes to Ferrari and Formula 1. Over the years, as a collective, they have managed to influence many major decisions taken by the Scuderia.

After the Australian remarkable drive in Shanghai, media in Italy have showered the Australian (of Italian origin) with plaudits and are questioning why the 28-year-old has not been snapped up by their beloved Ferrari.

Autosprint’s Alberto Sabbatini wrote: “Ferrari should take Ricciardo. The incredible thing about him is that he is still without a contract for the future. If I were Marchionne I would seriously consider Ricciardo.”

“He is at the height of his competitive splendour. He is not yet 29-years-old but he is a mature driver who knows how to bring in the big points for his team. There are enough certainties to say that Vettel and Ricciardo would form the strongest driver line-up in Formula 1.”

“Risk of problems? Yes, in the past when they were teammates Red Bull and there was friction, but times have changed. They are no longer two impulsive kids as in 2013/14 when they shared a garage. Ricciardo and Vettel have grown up.”

“Both are useful for the Ferrari cause. Vettel strongly aggressive in qualifying and in the race when at the front alongside Ricciardo who is a great fighter and capable of prodigious comebacks. With all due respect to Raikkonen, Marchionne should seriously think of such a dream team.”

Luca Budel of Sport Mediaset wrote: “While Max remains a potential phenomenon, the one who wins and keeps Red Bull going is Daniel Ricciardo, a driver who deserves Ferrari’s attention for quality and substance that he has been delivering on track for years.”

Piero Ladisa of Motori Online wrote: “Ricciardo is a free agent next year and among the teams interested in him are Ferrari. A move to Maranello will team him up with Sebastian Vettel and would give Ferrari reliability and quality. The pairing could be the most complete and potent on the grid.”

“True, they were teammates at Red Bull in 2014, and it was not a bed of roses, but both have matured enough to understand that internal fighting would be senseless. They could work together for the common good of Ferrari, first and foremost.”

Ferrari insider Leo Turrini wrote in his column for Quotidiano: “Not that it was needed because Daniel Ricciardo was already at the centre of the drivers market, but the spectacular victory in China, highlighted by exciting overtaking, has raised his stakes substantially.”

“Red Bull has decided to focus their future on Max Verstappen with a contract extension, while the Australian has no commitments for the next season and did not like the decision of his bosses [when they signed Verstappen to a three-year deal].”

“We know that he has already spoken both with Ferrari and with Mercedes. Kimi Raikkonen could retire at the end of the current season, while Valtteri Bottas has yet to completely convince his bosses in Stuttgart.”

Luigi Lencioni of Superscommesse wrote: “In 2019 Ferrari will have a new driver who will join Vettel. Raikkonen is close to retirement. Ricciardo could be the ideal substitute.”

Interestingly, just about every Italian publication also quoted 2016 F1 World Champion Nico Rosberg, who said after the race on Sky Sports: “If I was him, I’d go to Ferrari. It’s the best car at the moment and he knows he can beat Sebastian. I remember hating having him behind me in the races.”

The above are extracts from columns in several Italian media less than 24-hours after the race in Shanghai, suggesting that a collective demand for Ricciardo at Ferrari is growing in momentum among Italian scribes.

Ricciardo himself has made no secret – like just about every other top driver – that Ferrari is on his wishlist but at the same time does not want to be rushed into a decision.

He said recently, “I don’t really see myself racing in Formula 1 until my mid or late thirties. So more so I want to make the next period of my career work and make it right. I’m not just happy ticking over and just being here.”

“If I can get a good deal, with the right team, if that is Red Bull or someone else, then I feel it’s worth waiting,” explained the big smiling Aussie.

Whatever Ricciardo’s decision, all in the F1 paddock know of his abilities for some time and with his latest jaw-dropping escapades, on the road to victory at the Chinese Grand Prix, his shares have skyrocketed overnight.

It would be fair to assume his phone will be busy in the weeks to come… starting this morning!

Big Question: what would be best for Daniel?