Bottas: We were just not quite quick enough 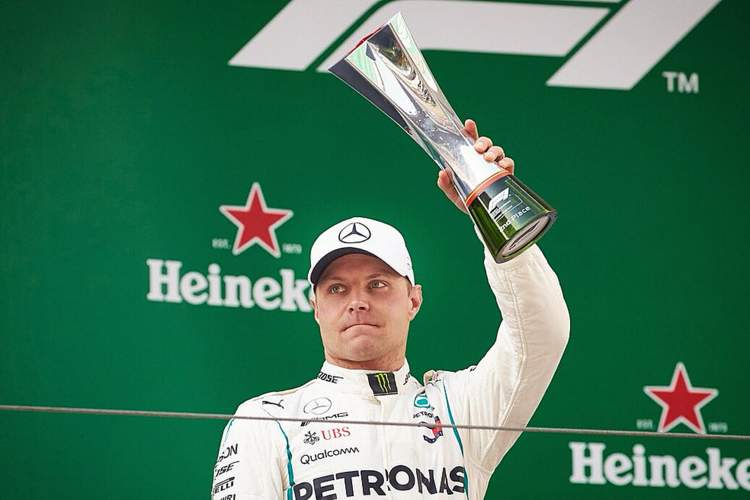 When Valtteri Bottas took the lead on lap 26 of the Chinese Grand Prix he thought he had the race in the bag, but a safety car deployment scuppered his ambitions and instead he had to settle for second behind race winner Daniel Ricciardo.

Bottas was a victim of a shrewd strategy move by Ricciardo and his team who pitted the Australian at a crucial point, sending him out on fresh soft tyres to pursue Ferrari and Mercedes who controlled proceedings at that point. And he succeeded.

As it turned out Bottas had no answer for the Red Bull driver’s charge and relinquished the lead on lap 44, the Finn crossing the line eight seconds adrift of the winner.

He spoke after the race in Shanghai:

Valtteri, coming on to you. A lot was made yesterday after qualifying about the team having set the cars up for the warmer temperatures that we had today in the grand prix. How was the balance of the car?
VB: I think the balance was OK. Like actually it felt OK yesterday, we were just not quite quick enough with the ultrasoft, so yeah, today we only used soft and medium and I think on the soft it was next to nothing, the difference to Ferrari. We were as competitive as them. I think with the medium it was pretty much the same case. So, for sure, starting the race from the second row makes it more difficult. It’s a shame what happened in the end because we really took the opportunities in the beginning of the race start, during the pitstop. After the pitstop everything was going fine. And then with the Safety Car we just got a little bit unlucky – but that happens sometimes. It’s difficult to accept that quickly, after the race – but that’s F1.

Talk us through the undercut. Were you surprised to come out ahead of Vettel?
VB: No. We knew that it is possible with this kind of gap, if you get everything perfect, coming in, in the box, into the pitlane and all that. If you can switch on the tyres quickly, it’s possible. That’s why we stopped at this point. It was perfect timing from the team. I think it felt it was my quickest stop I’ve had with the team. So, everything just went really well. Good out-lap. So, we knew it was possible.

And Valtteri can we just have your take on that overtaking manoeuvre?
VB: Well, yeah. I was defending, obviously I saw him very close in turns one, two, three. He got a decent exit as well. He was closing lap after lap with pretty big gains. Yeah, from my side there was not much to do. I tried to defend but ultimately, with the better tyres, he could really brake quite a lot later and got inside. Like he said, it was all fair and like this. I think it was just a matter of time, with the pace he was going.