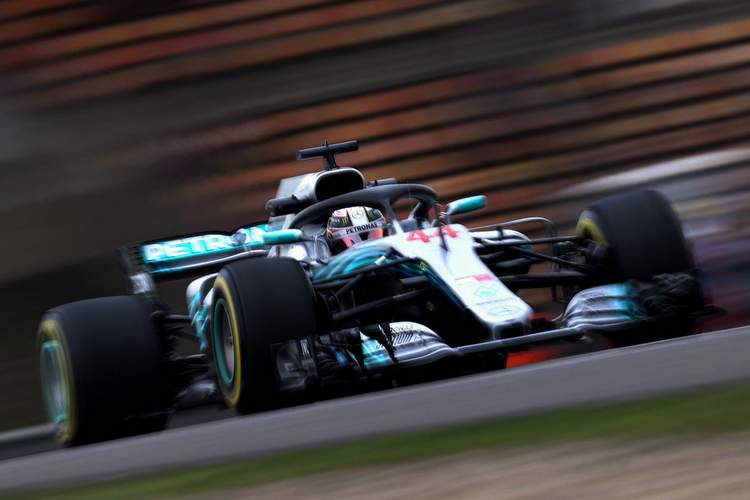 On the opening day of the Chinese Grand Prix weekend, Lewis Hamilton signalled his intent by topping the timing screens in both FP1 and FP2 but it is extremely close at the sharp end of proceedings on a cold and overcast day in Shanghai that ended.

Hamilton’s best lap time of 1:33.482 around the 5.5km circuit was a mere seven thousandth of a second up on Kimi Raikkonen’s best effort which was good for second place in the Ferrari.

Next up in third was Valtteri Bottas in the other Mercedes, ahead of Ferrari’s Sebastian Vettel – the quartet of pacesetters covered by a tenth of a second!

Red Bull have yet to find the sweet spot for both their cars, with Max Verstappen ending fifth-fastest albeit down on the top time, while teammate Danel Ricciardo was only good for ninth place, albeit a full second off Hamilton’s benchmark time.

Renault’s Nico Hulkenberg showed a good turn of speed, heading up the ‘Best of Rest’ in sixth and eight tenths shy of the top time. Eighth was Carlos Sainz, a tenth and a bit slower than his teammate.

Kevin Magnussen split the yellow cars on the timing sheets, with the seventh-best time. Again the Dane out-pacing Romain Grosjean in the sister car. The Frenchman, who focussed on race simulation runs, was two seconds adrift of his teammate’s best tour.

Fernando Alonso rounded out the top ten in his McLaren with teammate Stoffel Vandoorne 14th. Late in the ninety minutes session, the Belgian stopped out on track with a suspected loose wheel. He was summoned to the FIA race stewards for a post-FP2 chat.

After ditching Honda and now with Renault power, McLaren were bullish about competing at the same level as Red Bull this season. Clearly, there is work to do for the Papayas because on the day Alonso’s best was three-quarters of a second down on Verstappen’s best time and three tenths shy of Hulkenberg in the Renault.

In a nutshell, McLaren are slowest of the Renault powered brigade.

Ironically, around the same pace of the McLaren’s were the Honda-powered Toro Rosso pair with Pierre Gasly and Brendon Hartley 12th and 15th respectively.

Lance Stroll’s struggles at the wheel of the Williams FW41 continued, the Canadian teenager anchored to the bottom of the timing screens in both sessions, his best FP1 time a massive 3.6 seconds down on the session-topping time.

Stroll’s rookie teammate Sergey Sirotkin was 16th, 1.8 seconds up on his teammate when the chequered flag wave to end the session. 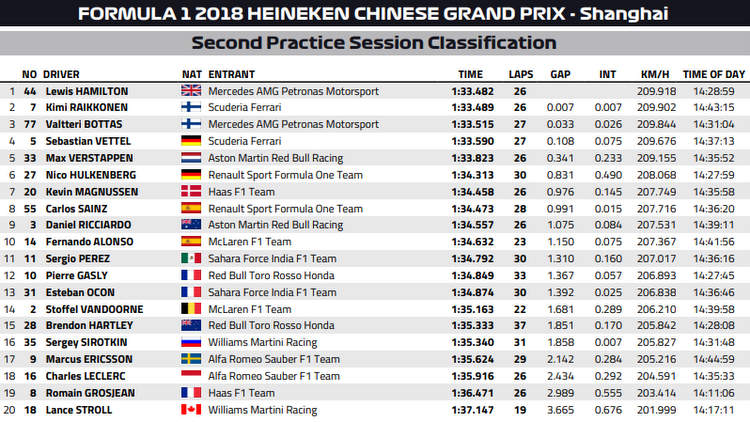