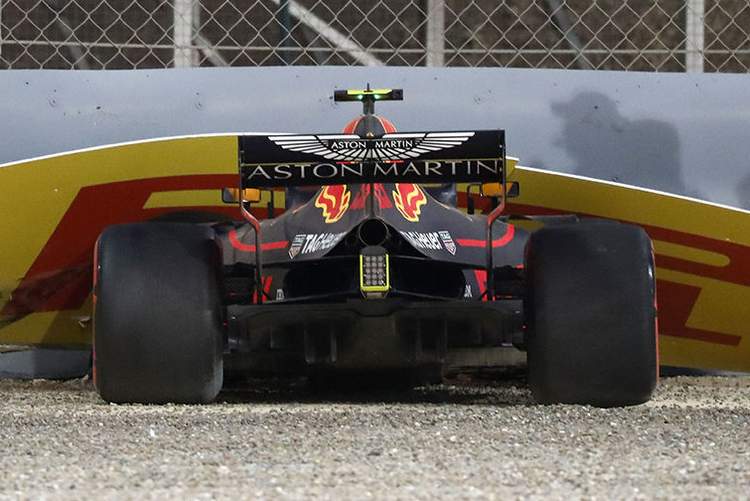 In the aftermath of his Bahrain Grand Prix qualifying accident, Max Verstappen was adamant that he lost control of his car because of an unexpected engine power surge or a stuck throttle during his fast lap run in Q1.

Immediately after the Saturday evening session at Sakhir, Verstappen explained, “I studied the data and suddenly we had a 150 horsepower increase which is a bit odd because the corner is not flat out so you are just juggling the throttle.”

“It was like an on and off switch, and I spun. I didn’t expect it at all. 150 horsepower when you think you are on the limit is quite a lot,” added the young Dutchman.

But now Red Bull chief Christian Horner has provided more insight into the real cause of the incident, “It wasn’t a stuck throttle. I think when he got high on the kerb there was an oscillation on the foot. It was fairly obvious.”

“The gearshift around there has always been a bit lumpy. I think it was a combination of that, pushing flat out, up on the kerb, oscillation with the foot – put a lot of stuff together, that’s what happens. So there’s nothing to read into it.”

According to Horner, Renault did an audit of the incident and found nothing untoward, “The engine did exactly what the throttle was asking, it was very clear.”

“It’s a determinist thing, cause and consequence, when you press on the throttle, something is happening to the engine. The engine reacted in exactly the same way that it was supposed to react,” confirmed the Red Bull team chief.

Verstappen’s explanation was immediately questioned by fellow Renault powered driver Nico Hulkenberg, “I would like to know where the 150 horsepowers are coming from. Does he have a party mode as well?”

“I haven’t experienced that. It doesn’t change from one lap to another. Let me put it like this – that’s Greek to me!” added Hulkenberg.

As a result of the crash, Verstappen had to start from 15th on the grid, but his grand prix lasted only two laps as he was forced to retire after colliding with Lewis Hamilton as the Red Bull driver tried to make his way up the order.