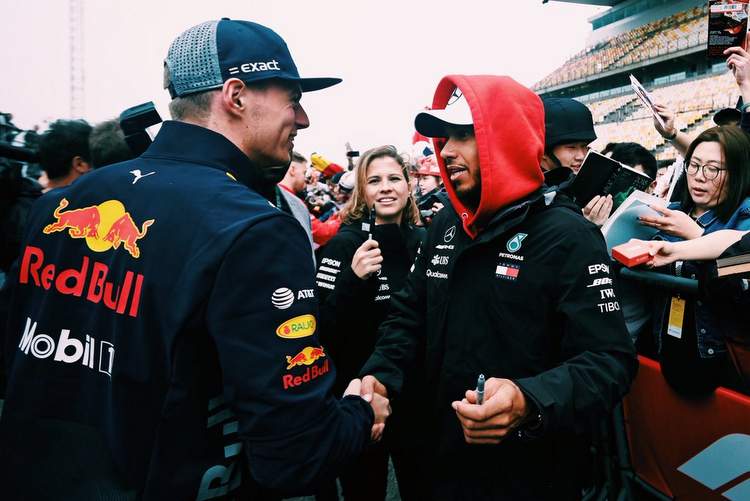 In the wake of their collision in Bahrain last week, Lewis Hamilton apologised and was photographed (above) shaking Max Verstappen’s hand as the pair signed autographs for fans ahead of the Chinese Grand Prix weekend in Shanghai.

A war of words between the pair was a big talking point after the intriguing Bahrain Grand Prix, after which Hamilton called the Dutchman a “d!ckhead” who lacks respect while Verstappen said that the Briton took the easy way out by taking it out on young drivers.

In Shanghai, the pair met during the autograph session with fans and they shook hands, after which Hamilton told reporters, “I generally do my talking on the track. Obviously, after this incident, I didn’t, but I just saw Max now.”

“It’s always good to show respect and being that I’m the older driver, I felt it was important that I went to him. So just as we were signing just now I shook his hand and I was like: “look, I’m sorry about the last race.”

Regardless of whether it is his fault or my fault, it doesn’t really matter. It’s in the past. Hopefully, that sign of respect shows a lot and helps you move forwards racing each other. Hopefully, it keeps respect between you because I think it’s important between drivers.”

Earlier in the drivers’ press conference, Verstappen was asked if he had spoken to Hamilton since the incident, he replied: “No. I might have a talk with him if it is really necessary but I won’t change my style of driving. It was racing, it happens.”

Asked how Verstappen reacted to the handshake, Hamilton said, “I don’t really know because there was a lot of noise around us, but he acknowledged it.”