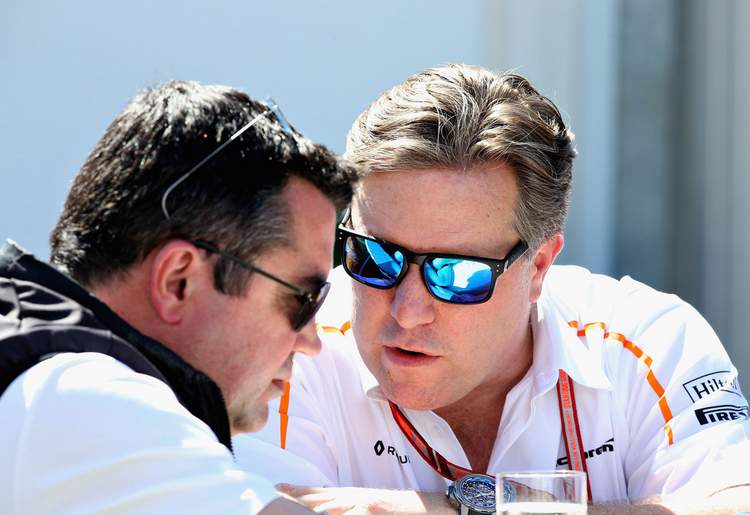 McLaren announced a management restructuring this week, with Zak Brown given overall responsibility for the Formula 1 team and Racing Director Eric Boullier reporting to him.

The McLaren Group said it had simplified the corporate structure into three divisions: Applied Technologies, Automotive and Racing.

Brown, a marketing expert, joined McLaren in 2016 as executive director with a focus on raising new sponsorship after the departure of former boss Ron Dennis.

The American has, however, been effectively acting as principal of the team and now takes on the title of chief executive officer.

“The work of the past year at a corporate level has been focused on structuring and positioning McLaren for growth,” said executive chairman Sheikh Mohammed bin Essa Al Khalifa in a statement.

“These latest developments are a natural consequence of that work and are designed to bring greater simplicity and clarity to the structure and leadership of the group.”

McLaren are the sport’s second most successful team after Ferrari in terms of race wins (182) but the former champions have been also-rans since their last grand prix victory in 2012.

Last weekend’s Bahrain Grand Prix saw the Renault-powered team reach a milestone of 100 races without a win and they face a tough road back after three dismal years with under-performing Honda engines.

To add to their discomfort, both the Honda-powered Toro Rosso drivers out-qualified Fernando Alonso and Stoffel Vandoorne in Manama.

Frenchman Pierre Gasly then finished fourth, a better result than anything McLaren achieved in the past three seasons with their Japanese partners.

Despite that, McLaren — ninth of 10 teams last year — are third in the championship thanks to both Red Bull drivers failing to finish.

Double world champion Alonso finished fifth and seventh in Australia and Bahrain respectively and is fourth in the standings.

The results have flattered the team, however, with the McLaren considered to be about a second a lap down on the Red Bull, which has the same Renault engine.

That has focused attention on the chassis, and raised questions about whether the Honda engine was blamed disproportionately last year.

“We know that we have the potential, we know that the car has some good things, some bad things. We need to make sure we improve the bad things as soon as possible,” said Alonso on Sunday night.

Neither Brown nor Boullier have ever had the privilege of watching a McLaren driver celebrate on a Formula 1 podium as the team have not won a race since the 2012 Brazilian Grand Prix.

Big Question: Do McLaren F1 team need both Zak and Eric at the helm?