Vettel: The car was quite nice and then it came alive 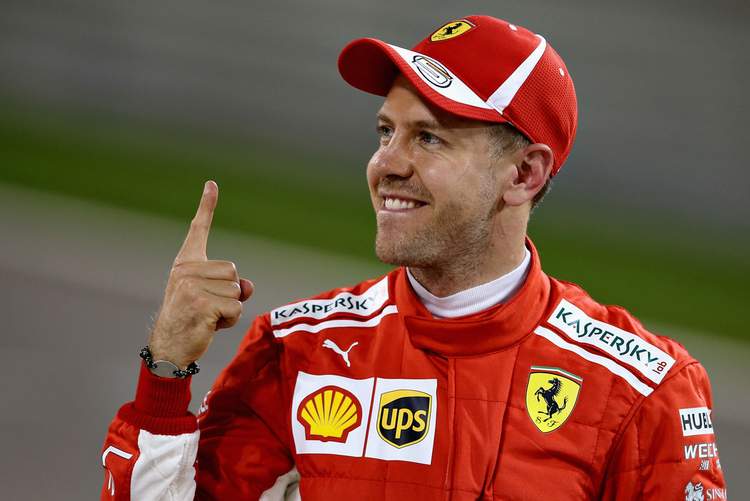 Sebastian Vettel revealed how his Ferrari came alive during qualifying for the Bahrain Grand Prix, and as a result, he was able to deliver a quality lap to claim pole position for the race at Sakhir on Sunday.

Vettel had played second fiddle to his pace-setting Ferrari teammate Kimi Raikkonen in FP1 and FP2. In Q1 the Finn seemed to have the edge over the German.

In Q2 Vettel found a tenth and a bit as the Ferrari came to him. In Q3 he went four tenths faster with a lap time of 1:27.958 to claim pole position.

He said afterwards, “We don’t know the car that well yet, but it’s getting there. The car was quite nice and then it came alive. I felt quite good from the start, making progress throughout the [qualifying] session.”

“My first run in Q3, I was very happy and then I tossed it away in the last corner. I’m happy I got the second run and got it clean. I knew on the last corner, I just needed to stay away from that kerb. The car was excellent all weekend so far. So I’m looking forward to tomorrow.”

In the two weeks since their fortuitous victory in Melbourne, they have been hard at work at Maranello to reduce the gap that they had to Mercedes at the season opener where in qualifying they were well outpaced by Mercedes.

Vettel explained, “We worked on the balance, we looked into it quite a lot. We improved it yesterday, we improved it today. Overall, we are a bit happier this weekend. We are happy with how the car was responding, how the front end was responding – you can also see it in the result.”

“The good news is we are close, in all the conditions, we’re close with everyone. It’s nice to see that we have built a very strong car and that today we are able to put it on the front row, beating everybody else.”

“It’s been a great result that the whole team deserves. However, the ‘big day’ is tomorrow,” added Vettel who will be seeking his fourth win at the desert venue, having won here in 2012, 2013 and last year.