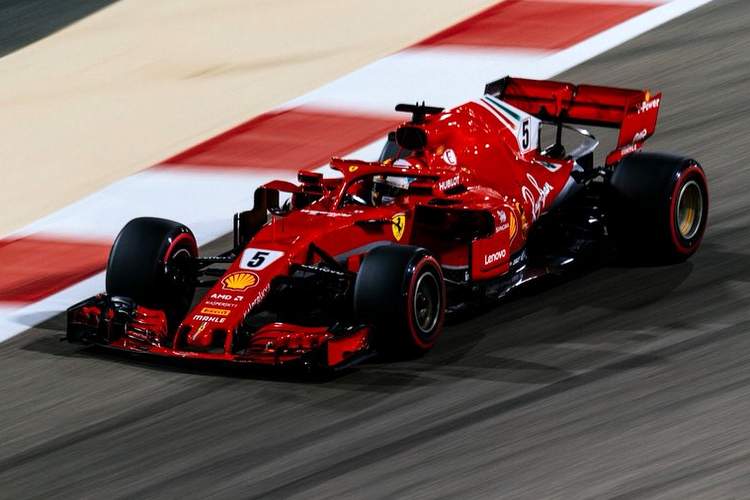 “Lion of a lap” Sebastian Vettel’s engineer declared over the radio as the Ferrari driver powered to pole position for Sunday’s Bahrain Grand Prix, ahead of teammate Kimi Raikkonen who completed the Italian team’s front row lockout.

After shading Raikkonen for most of the evening, Vettel dug deep to deliver an important pole position with a superb lap of 1:27.058 which was a tenth up on the next best and eight-tenths of a second up on last year’s pole-winning effort and in terms of the run of play it was a little out of the blue.

Vettel said afterwards, “I’m feeling good now but tomorrow is a long race and it’s difficult to make the tyres last. The car is quick and that usually helps. For now I’m chuffed and for the team as well as we had some issues this morning and we overcame them.”

“Quite intense. First run in Q3 I was very happy and then I tossed it away at the last corner. I was happy I got the second run and got it clean. I knew the last corner I had to stay away from that kerb. The car was excellent all weekend so I’m looking forward to tomorrow.”

“If the car is responding to what you want it to do it is a pleasure. Australia was more of a fight and we improved it yesterday to today. The car was responding so very pleased,” added Vettel.

A typically less verbose Raikkonen summed up his session, “Far from ideal in the last run with the traffic but what can I do. Tomorrow is the main thing. Tomorrow is when we get the points or not. We will see what we can do then.”

Behind the Ferrari duo, Mercedes, Lewis Hamilton in particular, were a shade of the team that dominated proceedings during qualifying in Melbourne two weeks ago. Party mode did not appear in Q3.

The reigning F1 World Champion is likely to start from ninth as he will drop five grid places due to a penalty for a gearbox change.

Hamilton acknowledged, “It’s not going to be the easiest tomorrow that’s for sure. I’ll give it everything I’ve got. The goal was to get P1 today but the Ferraris were just too quick. Valtteri put in a good time at the end but I wasn’t able to capitalise on the new tyres at the end.”

“It is what it is and we will try to recover from where we are. I’ve got the softer tyre so I should be able to go longer. There are a couple of different strategies tomorrow so I will try and eek out every last bit of power and strength from this car,” added the four times F1 world champion.

Valtteri Bottas did well to outqualify his teammate, his lap 0.15 of a second shy of Vettel’s best.

The Finn told reporters afterwards, “It felt Ok the laps and they were getting better towards the end. I got it more or less. These guys in the red car are just a little bit too quick. We can’t be happy with this so we are looking forward to tomorrow. I think it will be a close race, even with Red Bull and with Lewis and Max coming from behind.”

On the day, Red Bull were just not in it when it mattered and their cause was hurt hard by Max Verstappen’s error which resulted with him spinning into the wall in Q1 and crunching the front of the RB14.

Teammate Daniel Ricciardo’s best effort was good for fifth-fastest, half a second off the top spot pace, “The lap was bits and pieces and there was probably a tenth left on the table. I think Lewis still had a couple of tenths on me. Frustratingly close but top five within four or five-tenths is good for F1.”

Driver-of-the-Day must go to Pierre Gasly who stunned the paddock with the sixth best time in the Honda-powered Toro Rosso, the young Frenchman three tenths quicker than his teammate Brendon Hartley in the sister car who ended 11th.

Notably, both the Toro Rosso cars finished ahead of the McLaren duo of Fernando Alonso and Stoffel Vandoorne who were only good for 13th and 14th respectively.

The irony being that the Woking outfit ditched Honda for Renault engines in a quest to move up the grid. Truth is they seem to be the eighth best team on the grid this Sunday at their ‘home’ grand prix.

After a stellar performance in Australia, Haas struggled to find the sweet spot, but Kevin Magnussen did well to end seventh, but his teammate Romain Grosjean was out of sorts and was gutted not to make it beyond Q1.

Nico Hulkenberg was eighth on the timing screens in the Renault, almost half a second faster than teammate Carlos Sainz in the sister car who rounded out the top ten.

Esteban Ocon was ninth fastest in the Force India, a tenth and a bit up on his teammate Sergio Perez who did not move beyond Q2. He was 12th.

It was a dismal qualy for Williams with Lance Stroll slowest of all and rookie teammate Sergey Sirotkin 18th, the pair around 2.5 seconds down on the pace setting time.

Räikkönen set the early pace in Q1, his first flying laps, on soft compound Pirelli tyres, yielding a time of 1:29.951. Vettel slotted into P2 a tenth behind his Ferrari teammate and Bottas took third place with a lap of 1:29.275.

Fourth place was occupied by Verstappen but after a solid opening flyer it all went wrong for the Dutchman on his next quick lap. He lost control on the exit of Turn 2 and spun off at the following corner. He went nose first into the barriers, causing major damage to the left front of his car and the red flags were quickly shown.

When the action resumed the drivers needing improvement to secure passage to Q2 were 16th-placed Grosjean, Alonso in P17, followed by Sirotkin, Leclerc and the second Williams of Stroll.

Alonso was the driver to progress, though only by virtue of having set a time of 1:30.530 before Grosjean matched the lap to the thousandth of a second. The Haas driver was left to rue a mistake late in his lap. Had he not erred the Frenchman might have finished the segment closer to seventh-placed team-mate Kevin Magnussen.

At the top of the order the top five drivers remained in the garage for the final runs of Q1 and Räikkönen led the way with his sole flying lap of 1:28.951.

In the first runs of Q2 Vettel got the better of this team-mate for the first time during the weekend, taking P1 with a lap of 1:28.341. Räikkönen slotted into P2 but was dropped down a spot when Hamilton took P2 a tenth off Vettel.

Ricciardo found himself fourth ahead of Bottas and surprise package Gasly continued to shine for Toro Rosso with sixth place, in front of the Renault of Hulkenberg, the Haas of Magnussen, the second Renault of Sainz and tenth-placed Ocon of Force India.

In the drop zone ahead of the final runs were Sergio Perez, who had complained of a loss of energy on his first run, while P12 man Alonso was followed by team-mate Vandoorne, Toro Rosso’s  Hartley and the unfortunate Verstappen.

And while they shuffled their order, none made it through to Q3 in the end, with Hartley rising to 11th ahead of Perez, Alonso, Vandoorne and Verstappen.

Vettel made the first move in Q3 but while he took P1 with a time of 1:29.196 there was a mistake in the final corner as he went marginally wide and kicked up dust. That allowed Räikkönen to sneak past and the Finn took provisional pole by 0.095s. Hamilton slotted into third, a tenth behind the top two, with Bottas fourth ahead of Ricciardo and Gasly.

There were no errors on Vettel’s second attempt, however, and he rose to the top of the order with a lap of 1:27.958. The German was the only man to dip below the 1m28s mark and he thus took his 51st pole with just over four hundredths of a second ahead of Räikkönen.

It might have been assumed that Hamilton would have a say in how the front of the grid was drawn, but in the end it was team-mate Bottas who took P3 as Hamilton failed to find an improvement.

With the champion set to drop to P9 on the grid due to his gearbox penalty, Ricciardo backed out of his final run, safe in the knowledge that his time was good enough for P5 in the session and P4 on the grid.

Behind them Gasly put in a superb lap to qualify in sixth place ahead of Magnussen, Hulkenberg, Ocon and Sainz. 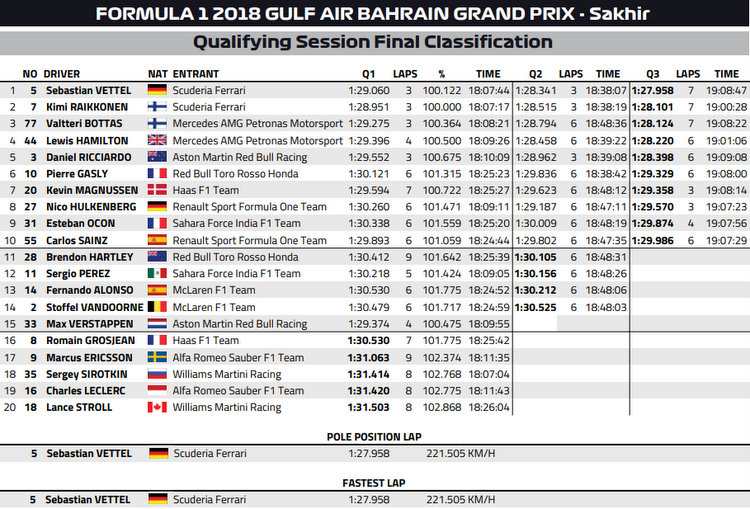