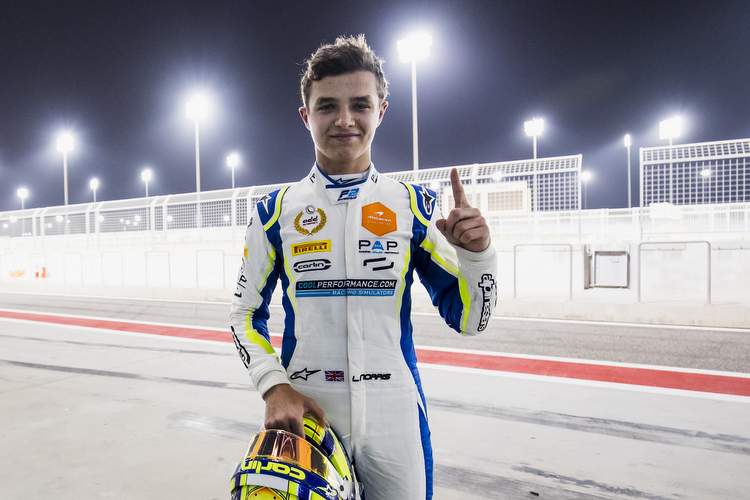 Lando Norris took pole position in the 2018 FIA Formula 2 Championship qualifying session at Sakhir, Bahrain in an enthralling battle for the first berth on the grid, setting a 1:41.761 to go fastest.

The McLaren F1 reserve driver will be joined on the front row in tomorrow’s feature race by countryman George Russell of ART Grand Prix, as DAMS’ Alexander Albon will start from third place.

The green flag was eagerly awaited by a queue of cars all lined up to hit the track, with Trident’s Santino Ferrucci first onto the circuit – closely followed by teammate Arjun Maini and Russian Time’s Artem Markelov, who quickly disposed of his medium-compound tyres after an exploratory lap to fall in line with everyone else on softs.

Ferrucci set the opening laptime before BWT Arden’s Maximilian Günther dipped below the two-minute mark. The bar quickly began to rise, and Sergio Sette Camara (Carlin) was the first in the right ballpark with a lap in the 1m42s. Russell quickly dispatched the Brazilian to go into the midpoint of the session ahead, standing on top of the pile with half-a-tenth’s advantage.

The field then pulled into the pits for the second round of running, bolting on fresh sets of soft tyres before looking to overhaul Russell’s benchmark. Maini looked threatening, but a moment in the second sector put paid to the Indian driver’s chances of snatching the headline time. Instead, Russell chiselled half a second out of his timesheet-topping lap, setting the latter two sectors purple en route.

Albon got closest to Russell, fractions slower than the British driver’s time, before Norris snatched pole by under a tenth of a second despite going wide at the final sector. Russell and Albon could not find any more time to stop Carlin from claiming their first F2 pole, while Nyck de Vries popped up into fourth late on with the fastest final sector.

With the margins slim in the qualifying session, tomorrow’s feature race promises to deliver an exciting season opener. Warm afternoon conditions should provide something of an extra challenge, as each driver seeks to open their 2018 accounts with a victory. 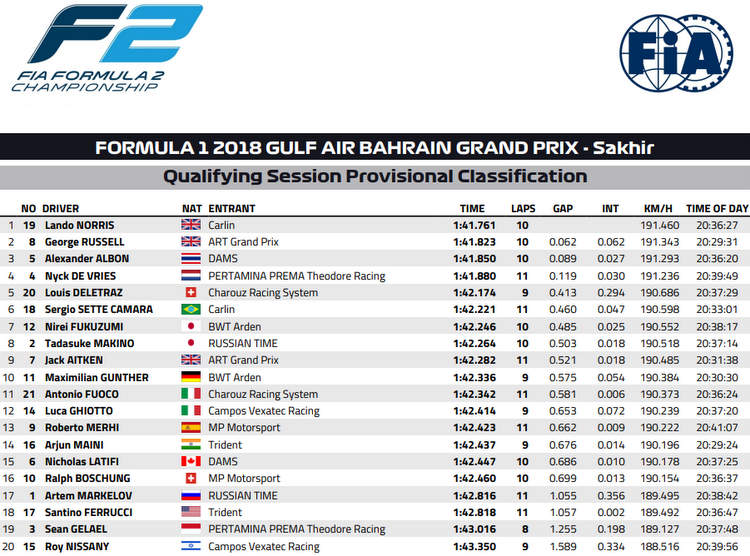