Vettel: I am happy with Ferrari 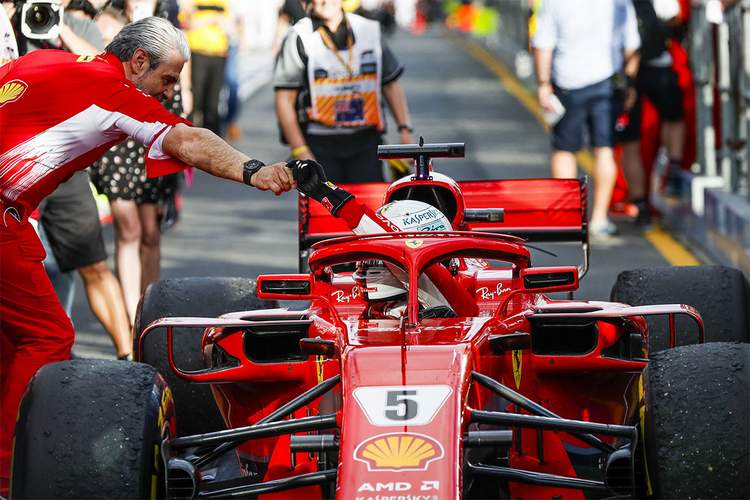 On the eve of the Bahrain Grand Prix weekend, in which Sebastian Vettel will make his 200th grand prix start he spoke about his first Formula 1 race, his passion for Ferrari and pledged his loyalty to the team.

In an interview ahead of his Formula 1 milestone, 30-year-old Vettel said, “I am happy with Ferrari. I think last year we made a huge step forward and we want to keep on improving. For sure I’ve enjoyed being part of this development process. About this year, it’s too early to tell.”

“I remember Ferrari since I was a child and have always wanted to drive a Ferrari. With my family, I visited Fiorano one day, but of course, I could only watch what happened from behind the fence without any interaction. So now, to be part of the team is the coolest thing ever.”

Since Vettel joined Ferrari in 2015 it has not been the smoothest of rides. At one point, a couple of seasons ago, he was told in no uncertain terms by Ferrari chairman Sergio Marchionne to focus on driving and less on management. Since then under Maurizio Arrivabene the Prancing Horse is now a calmer beast and Maranello shrouded in calmness as opposed to anxiety.

Vettel acknowledged,”As far as I’m concerned the key role of a Formula 1 driver in a team is to drive the car and focus on your job, not to try and lead the team. But I believe everyone is a part of the team and can make a difference. So, I try my best to make a difference too.”

Kimi Raikkonen has assumed the role of ‘rear-gunner’ for Vettel in a partnership that appears to work, the German explained, “We respect each other. We are both straightforward and we don’t hide anything from each other. There’s no politics and there’s no-nonsense.”

The nature and legacy of Ferrari are such that there is always intense media scrutiny of the team and their drivers and when asked if these expectations weigh him down, Vettel replied, “No, not at all. I have higher expectations for myself than anyone else. Ultimately, I am my own judge and don’t care too much what people think. If you do well, you know how well. If you mess up, no one knows that better than you.”

And finally, does Seb enjoy his day job?

“Yes, of course, I enjoy what I do. We get to drive the fastest cars in the world and race each other,” added Vettel ahead of his 200th grand prix start on Sunday, where he will be seeking his 49th Formula 1 victory at the venue where he triumphed in 2012, 2013 and 2017