Trio of F1 reserve drivers are hotshots in F2 battle 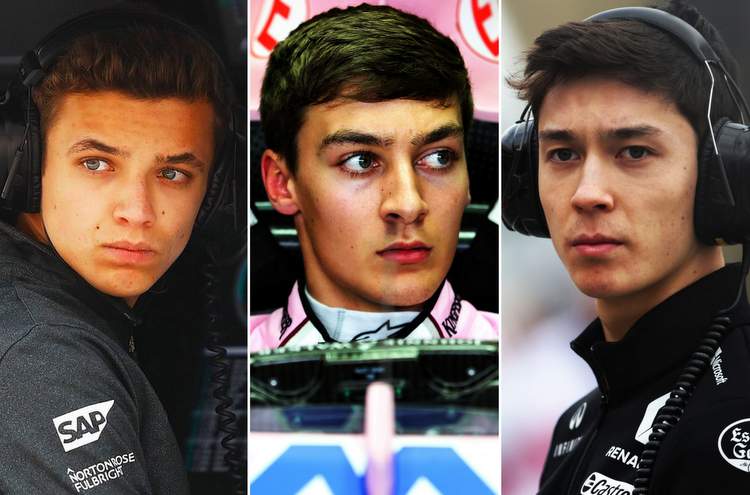 Four times world champion Lewis Hamilton is Britain’s sole representative on the Formula 1 starting grid this season but it may not be long before the Mercedes driver is joined by another Briton.

The Formula 2 season that starts in Bahrain this weekend sees three of his compatriots, all official reserve drivers for Formula 1 teams, step up for what could be a springboard to a grand prix future.

Two are teammates — GP3 champion and Mercedes reserve George Russell lining up alongside Renault F1’s Jack Aitken at ART — while McLaren’s rising star Lando Norris is in the Carlin cockpit.

Winning the Formula 2 title would put any one of them in a strong position for 2019.

Norris, 18, is already seen as a future successor to double world champion Fernando Alonso or Belgian Stoffel Vandoorne at McLaren but may have to wait before such a scenario materialises.

Russell, two years older, would be a strong candidate for Force India, should a vacancy arise at that Mercedes-powered team for whom he tested last year.

And Aitken could have a shot should Spaniard Carlos Sainz be summoned back to Red Bull after what is currently only a loan year at Renault.

Whatever the possibilities and permutations, there is plenty to play for.

“It’s interesting that you’ve got this British talent coming through, and you’ve got so many reserve drivers in F2 this year,” says Aitken, a 22-year-old Londoner with a Scottish father and South Korean mother.

Runner-up to Russell in GP3 last season, and eager to turn the tables, Aitken recognised the dynamic within ART would be unusual.

“Mercedes will try to help George as much as possible, and therefore help the team, and Renault will do the same with me,” said the Briton, who signed his FIA super-licence only last week.

“But you have to be careful because we are team mates and, especially with a new car, you have to work together and be quite coherent as a group and make sure that’s all going well.”

A string of champions from the series previously known as GP2 have gone on to Formula One including Hamilton who won in 2006 with ART, a year after 2016 F1 champion Nico Rosberg.

The 2016 title was won by Frenchman Pierre Gasly, now with Toro Rosso, with Vandoorne triumphant in 2015 and Britain’s Jolyon Palmer in 2014.

“Now the grid’s really strong but a lot of those are rookies, so anything’s up for grabs,” said Aitken, who has both British and Korean flags on his overalls, car and helmet and also an alternative Korean name (Han Sae Yeong).

“The hardest thing is getting used to pitstops and strategy because neither George or I have done any of that before. But in terms of just driving the car, it comes quite naturally and quite quickly.

“I think we’ll be up there…I don’t see any reason why we can’t win.”