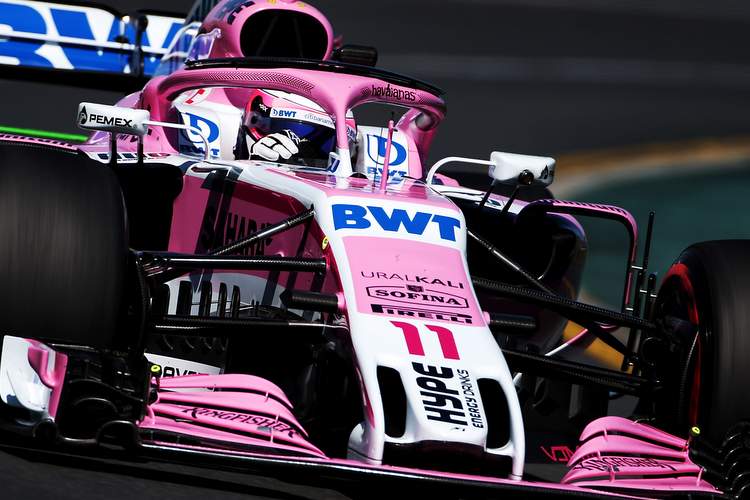 Force India preview the Bahrain Grand Prix weekend, Round 2 of the 2018 Formula 1 World Championship, at Bahrain International Circuit in Manama.

Vijay Mallya: “Melbourne was a clear indicator that the competitiveness of the grid has closed up in 2018. We’ve got to work hard to maintain our fourth place in the championship and there’s going to be an intense development race at the front of the midfield. We are certainly up for the challenge and there are further changes to the car in Bahrain. We are a motivated team, with determined drivers and we will be targeting points this weekend.”

Otmar, one race down, twenty to go. How is the mood in the camp…
Szafnauer: “Melbourne is always a peculiar race. We came within a whisker of scoring a point with Sergio having caught Carlos Sainz, but overtaking was especially difficult at Albert Park and tenth place remained out of reach. The race pace was stronger than our qualifying speed, but without track position we couldn’t really show our true performance. Esteban’s front wing picked up some debris early in the race as well which compromised his pace, especially in the second stint.”

What can we expect from the next couple of races in Bahrain and China?
Szafnauer “It’s business as usual in terms of developing the car. We’ve got a new front wing coming for Bahrain, which will complement the upgrades we introduced in Melbourne. The car we have now is totally different from the spec we used during testing and we’re still on a learning curve. There is huge development potential with this new aerodynamic platform and we have things in the pipeline, which will bring performance steps in the first quarter of the season.”

How do you see the competitiveness of the 2018 grid? Were there any surprises?
Szafnauer “Testing showed us that the midfield has closed up considerably, so there were no big shocks in Melbourne. I think the points will be spread among the teams more evenly this year and retaining fourth place is going to be a big task. But we’ve only had one race and things can change very quickly in Formula One. The development race is only just beginning and it’s where you end the season that counts. Last year we out-developed the teams around us and we have to do the same this year. Our goal is to defend our fourth place and we will be fighting hard to get back up there.”

The pink livery continues to turn heads. It’s surely the most eye-catching car on the grid…
Szafnauer:“The BWT pink identity is even stronger this year. I remember standing in the pit lane in Melbourne and thinking how much better this year’s paint scheme looks. Commercially it’s been another strong winter with Ravenol, DUO and PEMEX coming on board, whilst also developing our existing partnerships with NEC and Hype Energy. It was fantastic to unveil our partnership with Havaianas in Melbourne. The branding on the halo is very powerful and it’s great to see a young lifestyle brand supporting us and recognising the value of F1. We hope to have more news to announce over the coming weeks.”

Sergio Perez: “Racing in Bahrain is good fun. It’s unusual because you’re in the desert and we also race under the lights. It’s actually one of my favourite tracks of the year and I’ve always gone well there. It’s where I had my first podium with Force India [in 2014] so I have those memories every time we go back there.

“The Bahrain track often creates good racing. I still remember the battle I had with my old teammate, Jenson Button, in 2013. The layout really allows you to race wheel-to-wheel at times. If you lose a position in turn one, you can fight back through turns two, three and four.

“It was difficult to overtake in Melbourne, but Bahrain should be a bit easier because it’s a more traditional track. We’ve got to be targeting points this weekend. Melbourne showed just how close all the teams are in the middle of the grid, so it’s especially important to have a clean weekend and maximise every session.

“The development race will be very intense this year, but I know we have good things coming. We need to do what we have done in the last few years by making improvements to the car at each race. We’ve already made a step forward since pre-season testing so we need to keep working in the same direction.”

Esteban Ocon: “When I think about Bahrain I always remember the beautiful paddock, which has so much space and looks amazing at night with all the trees lit up. Every year there’s a barbeque for the paddock and it’s nice that all the teams and media can come together before the racing begins.

“I love racing at night. It almost feels quicker under the lights and it looks better on television. Hopefully the fans like it as much as the drivers. The track is good fun and there are a few good overtaking spots, such as turn one and turn four.

“It’s a track that feels very satisfying when your car is working well. I particularly enjoy turns five, six and seven because they are so quick and then you’re immediately into a big braking zone for turn eight. It’s tricky because you approach at really high speed and it’s easy to make a mistake and run wide.

“It’s a tough weekend physically because of the heat. The daytime practice sessions are the most difficult, but fortunately it gets a bit cooler in the evenings for qualifying and the race. You need to drink lots to be hydrated and make sure you don’t lose concentration.”