Vettel: Mercedes is not more special than last year 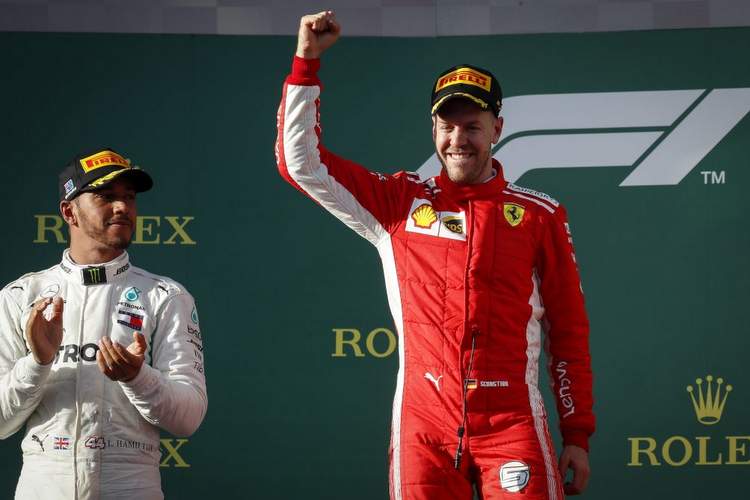 Ferrari driver Sebastian Vettel has weighed into the Mercedes “party mode” debate by suggesting he is not sure they actually his rivals have a bigger advantage than they had last year while resisting a chance to exact revenge on Lewis Hamilton in the aftermath of the world champion’s “wipe your smile off your face” quip.

During qualifying, Vettel got going in Q2 and at that time looked set to challenge for pole, but in Q3 Hamilton destroyed the Albert Park lap record as he blitzed his way to the top spot start for the season-opening Australian Grand Prix, lapping a massive seven-tenths faster than his closest rival. It was a huge advantage which stunned the paddock.

Reflecting on the race weekend after his victory, Vettel was not overly impressed with what his rivals unleashed in Melbourne and observed, “[Mercedes] didn’t do anything special – not more than they did last year, probably even a bit less by the looks of it.”

“I think they did turn it up for Q3 but not by seven tenths. Probably if you look at qualifying carefully, it’s fair to say they were quick in Q1, quicker than us, Lewis was quick in Q2 and then his second run, I don’t know, something happened.”

“So, his last run in Q3 was the only proper run at the end, and he had a clean run, and I don’t think the gain that he had in time was down to engine.”

“Probably a tenth, a little bit more, but not seven tenths. So, the credit is for his lap that he did and not for the engine power,” acknowledged Vettel.

A day earlier Hamilton and Vettel engaged in a frosty exchange when the Mercedes driver said he enjoyed “wiping the smile off” the German’s face,

Credit to Vettel for not using the opportunity after winning the race to exact verbal revenge, when asked if in the wake of his rival’s comment victory was sweeter, Vettel said, “Not really. He said he was joking and I believe him.”

“I don’t think we need to go on that sort of level. It’s fine as long as we joke with each other and apart from a point last year, we don’t have a problem with each other.”

“Even if we are very different persons, I think we share – all of us – a common passion and that makes us quite equal again.”

“We love racing and we try to do our best, once we’re in the car and beat all the others. In that regard, I don’t see why we shouldn’t get on with each other,” added Vettel.