Arrivabene and Horner clash in Melbourne 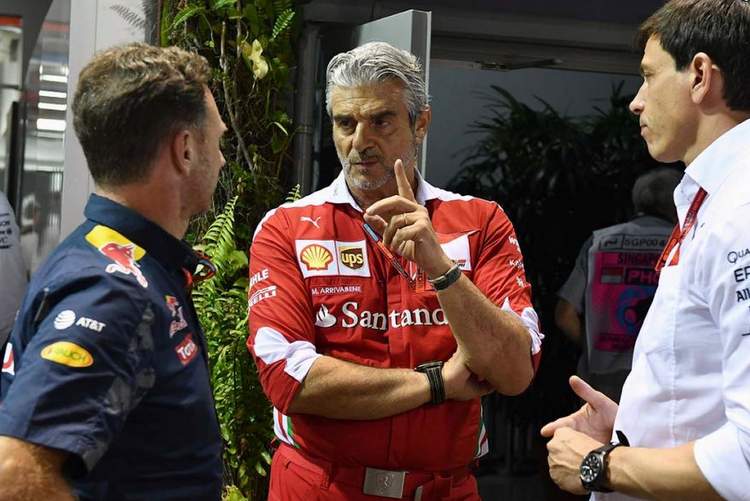 The pair were at odds over an alleged gentlemen’s agreement between the teams regarding poaching staff from the sport’s governing body.

Earlier this month it was announced that the FIA’s Laurent Mekies will leave his post as FIA Safety Chief and Deputy Race Director to join Ferrari, which triggered a furore, similar to when FIA’s F1 Technical Director Marcin Budkowski announced his move to Renault.

Horner claimed that after the Budkowski switch, all teams agreed that an employee should take 12 months gardening leave ahead of such a change, but when asked about Mekies’ move Arrivabene scoffed at the criticism from his colleague.

Arrivabene insisted, “There is nothing wrong with that. We were respecting absolutely local law, the Swiss local law, where Laurent was hired. Afterwards, we went even further than that because we gave him six months of gardening leave.”

“However, having said that, what we have discussed before is that we have signed a confidentiality agreement that means we are not allowed to discuss or share in public what we discuss here.”

But Horner was adamant, “For me it is a big deal because the disappointing element about this is that we have a thing called the Strategy Group where the FIA, FOM and all team principals attend and we discussed the Marcin issue where there was great unrest about a key member of the FIA going to a team, in which case it was Renault.”

“Renault diluted that by putting him on an extended gardening leave but then ensued a conversation about it being unacceptable – every team found it unacceptable.”

“Of course you are dealing with employment laws across different states and different countries and to try to police legally something like that, it was agreed in the room, that all the lawyers in the world couldn’t come up with a contact to police it.”

“But there was an understanding and a clear statement by the teams to say, right, let’s have a clear position that there should be at least a period of 12 months in the garden for a member of a team going from either FIA/FOM to a team or from a team to vice-a-versa,” added Horner.

To which Arrivabene replied, “Yes because we gave a mandate to the FIA – to the lawyers of the FIA – to check national law and come back to us at the next Strategy Group. This is what the FIA is going to do at the next strategy group, which is on the 17th of April.”

Horner then revealed that it was, in fact, Ferrari president Sergio Marchionne who called for more draconian measures, “What’s most disappointing about it is that it was Ferrari, or Sergio, who was pushing for a three-year period. On one hand, you get a team pushing for a three-year gestation and then a few weeks later we are in this situation. It makes discussions in that forum a waste of time.”

Sandwiched between Horner and Arrivabene, Mercedes boss Toto Wolff made light of the situation when he retorted, “First of all, I didn’t see any gentlemen in the room when we discussed it. Second, it’s completely different to Marcin.”

“They are both intelligent engineers, but Marcin was involved in issuing technical directives just a few weeks before he decided to join a team and had a lot of inside [knowledge], and Laurent was involved in totally different activities that are not as sensitive, in my opinion, as with Marcin’s. He is joining the team in seven or eight months from now and for me, it is not a big deal,” added Wolff.

Big Question: Should there be ‘gentlemen’s agreements’ in modern Formula 1?