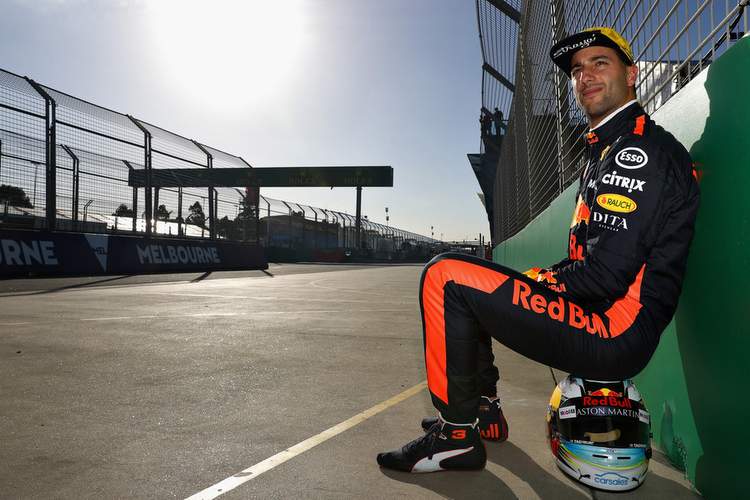 For Daniel Ricciardo, his home Australian Grand Prix has been an exasperating mix of desperately willing fans and mostly unwilling cars, coupled to statistics that show that an Aussie has never won his home race since it became part of the F1 world championship in 1985.

This year, however, the Red Bull driver feels a record of frustration could end with a long-awaited podium at Albert Park on Sunday.

Red Bull were buoyed by pre-season testing and Mercedes’ four-times champion Lewis Hamilton has tipped them as possibly the team to beat.

It’s a refreshing feeling for 28-year-old Ricciardo, whose pride at flying the flag for Australian racing at his home track has been spiked with anxiety over his car’s reliability in the last three years.

“Yep, we had a good winter, I think it’s all there in front of us now,” Ricciardo told reporters at Albert Park on Thursday.

“I think we’re still the top three teams. Merc (Mercedes) and Ferrari and us. I think we’re still going to be leading the pack for now, so, yeah, hopefully, we’re deep in that front group and have a chance to stand on that podium.”

Ricciardo has already stood on the podium at the lakeside circuit once before and soaked up the adulation from fans after crossing the line second behind Nico Rosberg in his debut race for Red Bull in 2014.

The joy was short-lived, however, as he was disqualified soon after for a mechanical infringement that was no fault of his own.

He just missed out on a maiden podium for a home driver in 2016 when he finished fourth, while he could not wait to be shot of the place last year, having suffered a crash during qualifying before retiring midway through the race.

“It has to be more fun (this year),” said Ricciardo, who started last year’s race from the pit lane after his car stopped prior to the formation lap.

“Not starting last year wasn’t fun at all… I missed a lot of the Sunday buildup which was not fun. So for sure this preparation is going to mean more fun this weekend and then we’ll see where that fun takes us.”

Ricciardo, who claimed his fifth win at Azerbaijan last year, will engage in another intriguing intra-team battle with 20-year-old Dutchman Max Verstappen, who many have tipped as a future world champion.

The Western Australian will have additional motivation to start the year positively, with his contract finishing at the end of the season.

Red Bull have said they want him to stay but champions Mercedes and Ferrari, the sport’s most successful team, both have drivers whose contracts expire at the end of the year.

“I feel like I’ve answered already so many contract talks (questions) and we haven’t even got the first race of this year done, so I’m just going to put all those talks on hold for a while,” he said.

“This is a year which our prep’s been well and good, and I really, really hope Lewis is right that we will have a chance to fight for a title and that will ultimately make me very happy and… take my time and see what happens. Ask me in six months’ time,” added Ricciardo.