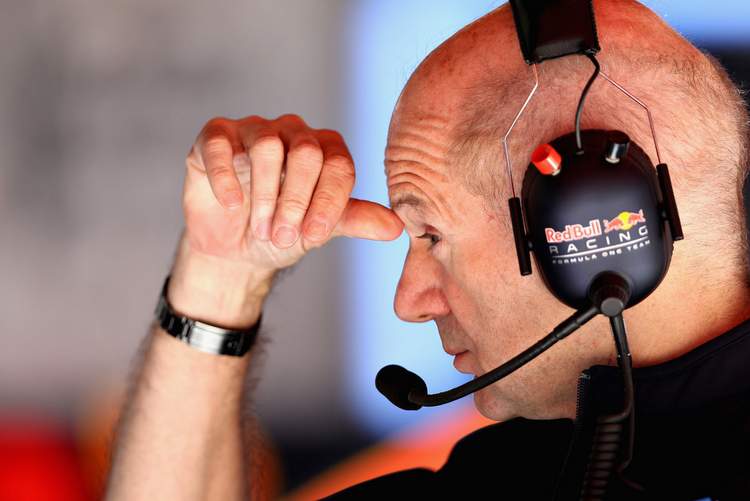 Red Bull ace designer Adrian Newey fears Formula 1 is losing its magic because it has evolved into an engine formula that is far too expensive, extremely complex and difficult to cap budgets, but he does believe that restricting the use of expenses such as wind tunnels will go a long way to levelling the lopsided playing field that currently exists.

There are ten teams of which a couple of them just survive from year to year while three of them are gobbling up the results by massive spending in the development of their respective cars. The other five teams merely make up the numbers.

Throw into that the fact that the current cars, despite being amazing pieces of engineering, do not promote close racing and Formula 1 is not in a very good place in terms of unrealised entertainment potential.

Newey did not mince his words in an interview with Auto Motor und Sport, “The balance between the importance of the engine and the chassis has shifted and is no longer tenable.”

“Here Mercedes is superior in all the key areas: engine power, fuel consumption, drivability, MGU-H recuperation. You can not make up for that with a better car.”

In the end, it has to be asked: how much money and resources should teams be allowed to throw at their F1 campaigns without restriction?

Newey’s own Red Bull team is spending around $300-million per year on their Formula 1 campaign, with 800 staff behind Max Verstappen and Daniel Ricciardo working hard to give them the best equipment.

Mercedes and Ferrari have about 1,000 people dedicated to their F1 projects, bearing in mind they also supply teams with engine packages which Red Bull do not do.

Nevertheless, there is even an imbalance of power among the Big Three teams as Newey pointed out, “We have 125 people in the aerodynamics office. Mercedes has almost twice the people. Their output is automatically higher.”

Liberty Media are well aware of this scenario that currently prevails among the haves and the have-nots in the sport and have suggested addressing the issue with a budget cap.

But Newey is not a fan of such action, “That’s socialism. In real life, it only worked in theory. Restrict the tools. Then we do not need so many people.”

First to go in Newey’s book are wind-tunnels, “From a technical point of view, they are dinosaurs that are about to die out anyway. We design more and more with the help of the CFD simulation.”

Newey further advocates limiting the use of certain aero bits, “If you’re only allowed to build five different rear wings a year, you’ll wonder if building a single special wing for Monza is required. You then restrict yourself to the essentials.”

Finally, Newey reveals why he is no fan of the hybrid turbo power unit era which he believes is not the right engine formula for the sport, “In 1998, our McLaren weighed 580 kilograms. We still had 45 kilos of ballast on board. Today we are at 733 kilograms with virtually zero ballast.”

“You could save a lot of fuel if you were driving with significantly less weight, but this is only possible with other engines,” added Newey.

Big Question: Is Adrian’s thinking the right way to go for Formula 1?