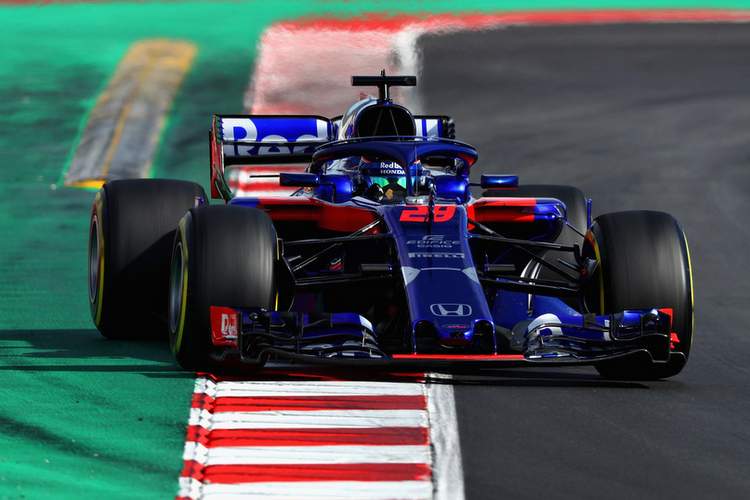 Toro Rosso report from the fourth and final day of the second preseason test at Circuit de Catalunya-Barcelona, ahead of the 2018 Formula 1 World Championship.

Franz Tost, Team Principal: “After the weather related problems in the first test, we were quite lucky with the second test, as the air temperatures reached 20ºC and the track around 37ºC. This gave the team the chance to learn a lot about the new car, the tyres and the set up. Nevertheless, I hope we will test in Bahrain in the future. I have always said that the partnership with Honda will be very important for our team, as it gave us the possibility to start a new way of designing and developing this season’s car in real cooperation with a very strong engine manufacturer – this time effectively working together in order to improve the packaging in its totality. After completing the two pre-season tests here in Barcelona, I’m satisfied with what we have achieved, completing a total of 3.826 km in 8 days – in the end it was really 7 days due to bad weather during the first session of testing last week, which makes the result even better. It’s great to see that we have been able to perform at a decent level in terms of speed and reliability. Honda has done a great job but, also from our side we have been able to provide our drivers with what seems to be an easy car to drive. Both Brendon and Pierre were able to give us a very valuable feedback during these days, accumulating lots of data, which we will now analyse to be at our best for the first race in Melbourne. I’m optimistic but cautious at the same time – there’s still a lot to do! I want to thank the team, Honda and the drivers, as we have done a very good job together. Let’s go racing now!”

James Key, Technical Director: “We completed another positive day with a lot of mileage for Brendon. Today we replicated what we did with Pierre yesterday with some early morning softer compound running with slightly lower fuel in short runs and then some race running in the afternoon. I think again we managed to learn quite a bit and a little more about the tyres and certain aspects of the car setup from what we had discovered yesterday, so that proved to be useful but there’s still much to analyse prior to the first race. I’d like to thank our colleagues at Honda for a really excellent effort over the last two weeks. They really have only run one engine for the entirety of Test 02, and pretty much it’s run faultlessly throughout, other than a minor issue towards the end of today where we stopped the car as a precaution to have a look at the issue in more detail and not take any risks. Given we were close to the completion of our programme today anyway, we felt it was better to spend some time on that, which Honda are in the process of investigating now, but otherwise everything with them has run faultlessly. I’d like to thank them very much for their hard work and excellent support over the past two weeks and through the car’s design. So, that was winter testing 2018 – it’s gone very quickly with two weeks of very intense work. Now we look forward to the beginning of the season! We’re at the end of a process which is the completion of the design, development and build of the STR13 which started off over a year ago. We’re at the start of the next phase which is going to race that car and develop it further, and we look forward to starting that process in Melbourne in a couple of weeks.”

Brendon Hartley: “It was another really good day today, we completed 159 laps within two hours from the end of the session. I drove the car in Day One of Test 01, and I was able to drive on the last day, so I opened and closed the pre-season tests – it’s been great to see how much we have unlocked from the STR13 and all of the hard work that goes on behind the scenes. The people watching back home might not realize but there’s so many people involved to get these cars working to perfection! I think we’re really in the mix and that we’re looking good for that midfield battle, which is really fierce. We’re starting to get a better picture of where we are in the fight, it was a really positive test and I think we’ve shown a lot more than what people expected… which is great! It’s been a strong start to the partnership with Honda, so I think everyone’s really positive after these test days and we’re really looking forward to Melbourne which luckily isn’t far away.”

Toyoharu Tanabe, Honda F1 Technical Director: “Today, Brendon went through the same programme that Pierre did yesterday and completed 156 laps. Both drivers were able to complete a race simulation, which is a positive result. We used the same Power Unit throughout Test 2. Therefore, it was disappointing that we spotted an anomaly on the data from our PU towards the end of session and decided to stop running, as there would not have been enough time to investigate the situation fully and send the car out again. Overall, the results of winter testing have been satisfactory, as we managed to get through nearly all items on our programme, thus acquiring plenty of valuable data. qually important, it was our first eight days of working at a race track together with Toro Rosso. Our relationship has been very open and honest and communication has been effective between all of us. It’s only testing, but it has been an ideal start and now we look forward to racing together in Melbourne.”