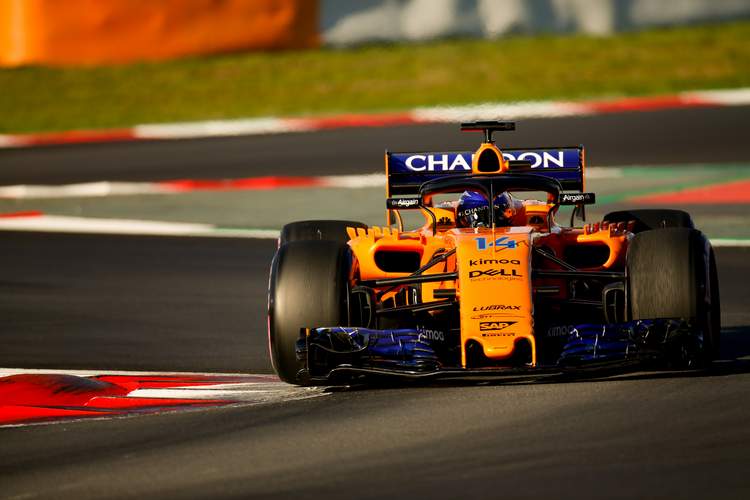 Although Fernando took to the track shortly after 09:00 hrs to commence his run programme, his progress was cut prematurely short by a problem with the turbo, prompting an engine change which kept him in the garage until the after the track closed for lunch break.

The team worked hard to prepare the car for the afternoon session, and Fernando returned to the track just after it reopened at 14:00hrs. Fernando condensed a huge proportion of today’s run plan into only a few hours of track time, completing significant mileage and ticking off more valuable elements on the test programme.

The day – and the pre-season tests – ended ultimately positively, despite the challenges the last couple of weeks had delivered. Fernando completed 93 laps, posting the second-quickest time of the day.

Eric Boullier, Racing Director: “After a difficult start to the day this morning, I’m pleased that we’ve rounded off both today’s programme and the two weeks of pre-season testing on a positive and productive note. We suffered a turbo issue in the power unit early on in our morning programme, which we believe was linked to the chassis oil leak on Tuesday. We had put this turbo onto the car overnight after spotting something in the data on the current power unit during installation, and to save time with investigation elected to swap the two elements. Unfortunately, this one failed – although the two issues aren’t linked – and it will be sent back to Viry for further analysis and investigation. Nevertheless, the guys and girls in the garage did a phenomenal job to change this new configuration of power unit in four hours so that Fernando could return to the cockpit. In the afternoon session the engineers worked hard to condense our programme to provide us with as much track running as possible, and the whole team pulled together to get a significant amount of work done this afternoon. Fernando put in some solid laps, and he – and we – have ended the day happy with 93 laps completed after a pretty challenging start. We now will return to the factory armed with massive amounts of data to analyse before we head to Australia in two short weeks. We know we have things to work on, but we also know there’s definite potential in our package, and we’ll be working hard to maximise our reliability so that we have the chance to show our true performance in Melbourne. I’d like to say a huge thank you to everyone in the team for their hard work over the past few weeks. Despite the problems we’ve faced, we’re taking home an extra 810km of data back to Woking compared to this time last year, which will help with our analysis and inform the direction we will take with car set-up when we arrive in Melbourne. I know I can speak for the whole team when I say that we already can’t wait to go racing.”

What’s next?
The team returns to our factory in Woking for final preparations before heading to Australia in a little over two weeks’ time for the 2018 season opener in Melbourne.