Horner: Mercedes and Ferrari are working as one team 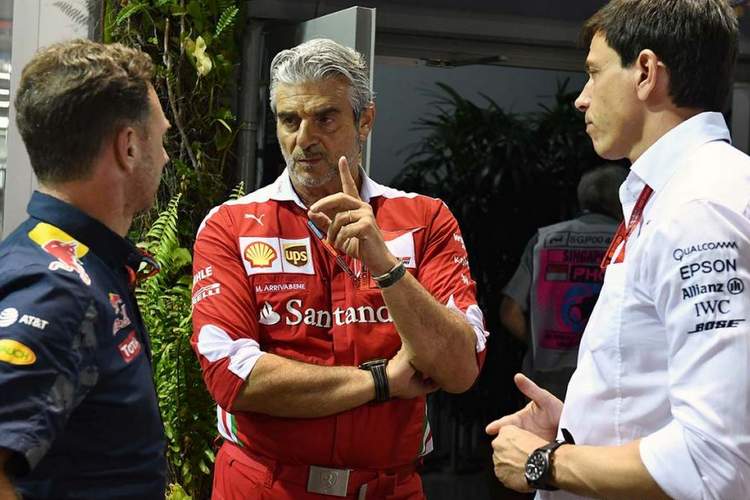 It is no secret that Mercedes and Ferrari are on the same camp when it comes to their vision for the future of Formula 1, so much so that Red Bull chief Christian Horner mocked the relationship between the sport’s two powerhouses.

Ferrari president Sergio Marchionne has been very vocal in warning that he will pull out his team if the ethos of Formula 1 is cheapened by the sport’s new leadership. He has said this more than once and each time his Mercedes F1 counterpart Toto Wolff has backed the Italian team’s boss.

Horner told reporters on day one of pre-season testing in Barcelona, “Mercedes and Ferrari are working as one team these days.”

“Sometimes it is difficult to tell which is which. For the last couple of years there has been a very tight relationship between Ferrari and Mercedes. They even broadcast each other’s launches and things like that these days.”

McLaren have indicated that they are Liberty Media on this matter, while Red Bull are also inclined towards that camp.

Horner explained, “We are focused on going racing, things that we can control, there are new owners in Formula 1 in Liberty and they have to decide what they want Formula 1 to look like moving forwards.”

“I’m sure they will lay out their roadmap and plan during the course of this season and we will go from there. But of course there is going to be a lot of posturing and positioning and you can see that has already started in certain quarters.”

Bernie Ecclestone emerged from his hibernation this weekend and suggested that Ferrari will launch a breakaway F1-style series if they do not come to an agreement with Liberty Media.

But Horner has other ideas, “Bernie knows every time the Concorde came up for renewal there was talk of a different series. Since my involvement over the past 14 years, every time it’s up for renewal, bang there is another series mooted. It hasn’t happened yet and I don’t think it’s going to happen at the moment.”

“Formula 1 is and will be the pinnacle of motorsport and it is down to the commercial rights holder and the governing body to say ‘this is what the future looks like’ and then it’s down to the teams whether they want to be part of it or not,” added Horner.

Big Question: Are Ferrari and Mercedes seriously in an alliance regarding the future of F1?