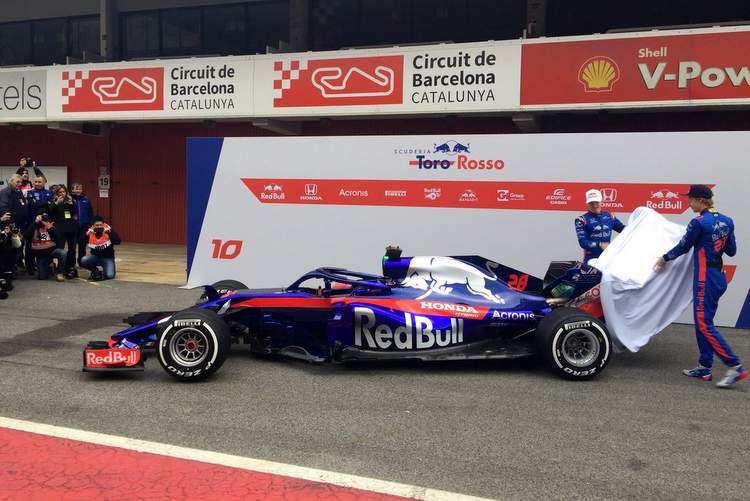 Toro Rosso’s new era as a works team, thanks to their partnership with Honda, came of age when the team’s STR13 was unveiled by their drivers ahead of the first day of Formula 1 testing at Circuit de Catalunya in Barcelona.

The team’s drivers Brendon Hartley and Pierre Gasly did the honours of lifting the covers off a car that carries so much hope for the Red Bull F1 organisation as a whole.

The team said of their new car: “The highly anticipated first collaboration between Scuderia Toro Rosso and Honda, the STR13, was unveiled this morning, just before the first day of pre-season testing got underway at the Barcelona-Catalunya Circuit.”

“The cover was pulled off our 2018 challenger by our driver pairing of Pierre Gasly and Brendon Hartley. The STR13 sticks with our striking blue, red and silver livery, but makes history as the first car produced by Toro Rosso featuring an exclusive engine partnership with Honda.””

Last week the Faenza based team gave the world a sneak peak of their new car by releasing an image of it at speed on a wet circuit.

At the time team principal Franz Tost summed up the key elements to Scuderia Toro Rosso’s 2018 Formula World Championship season, “There’s a lot that’s new for our team this season. First, we get to work with a new technology partner, Honda.”

“Right from the start, they had a positive approach and we are proud to work alongside people from such a great company. Our car features a new power unit and, along with our driver line-up of Pierre Gasly and Brendon Hartley, everything is in place for us to tackle the 2018 season.

“We always give our all and I’m sure that if we stay focused and work together, the team can achieve the success it deserves,” added Tost