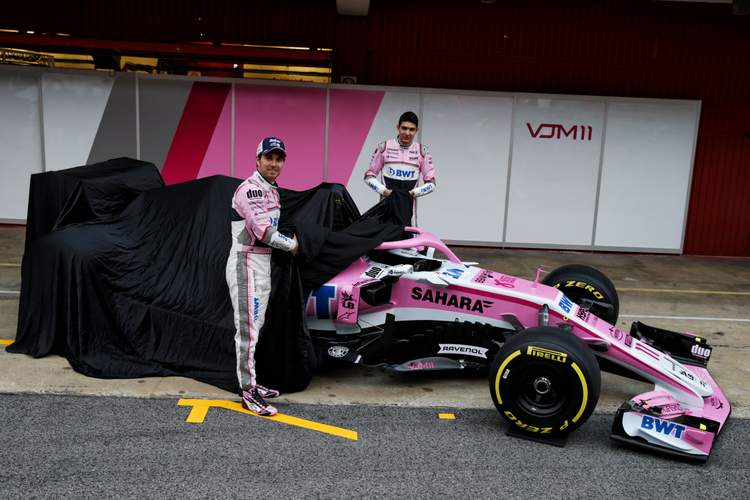 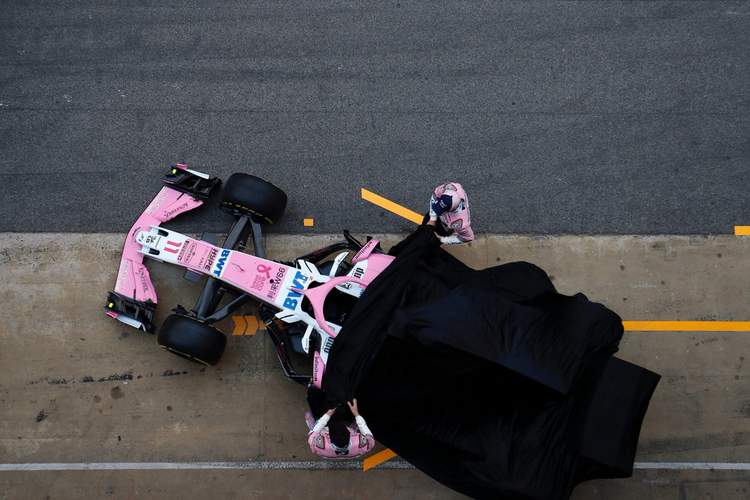 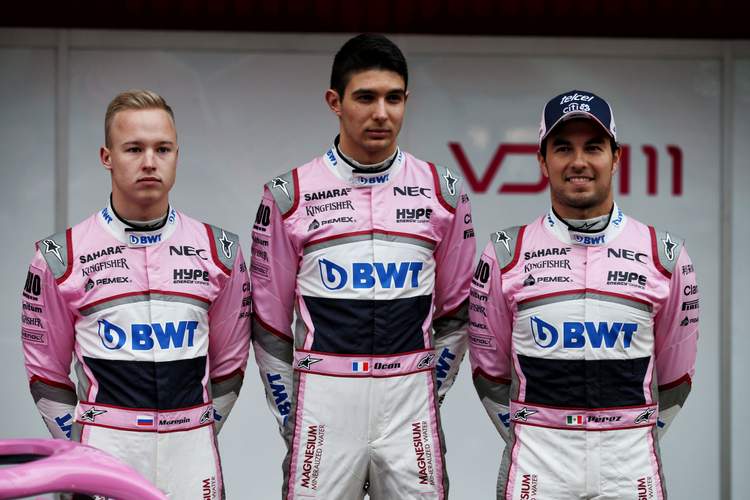 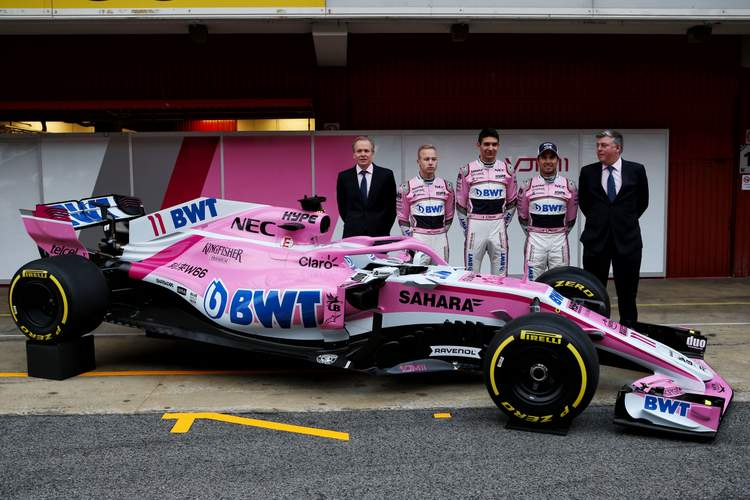 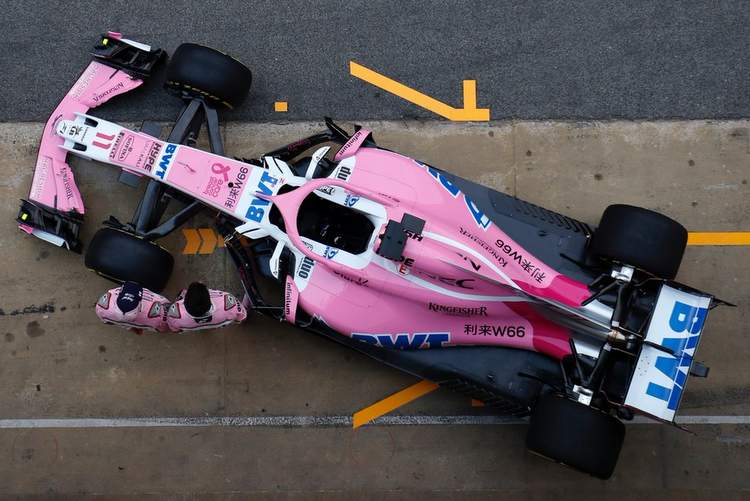 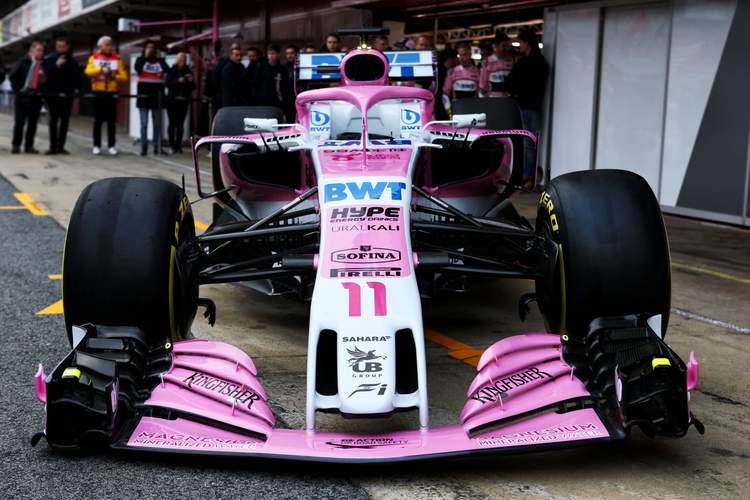 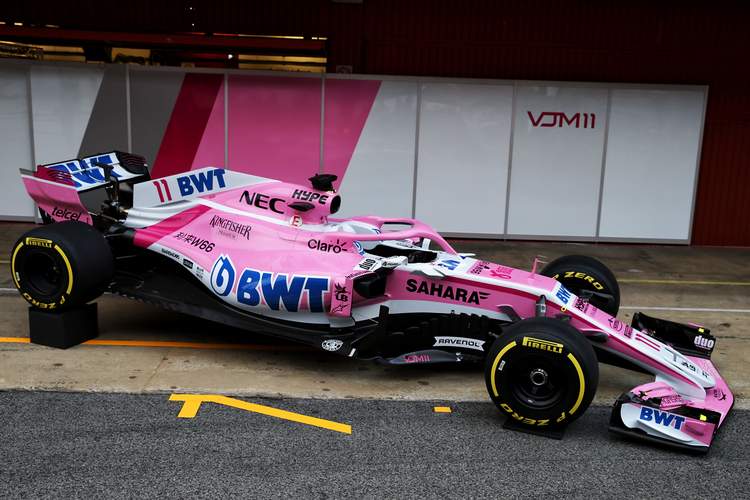 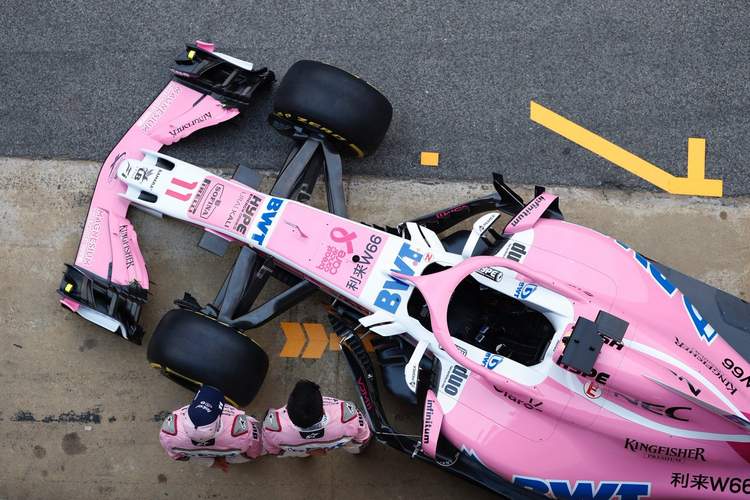 Force India have pulled the covers off of the VJM11 which they dubbed the Pink Panther after which they will embark on the first of eight days of pre-season testing ahead of the 2018 Formula 1 World.Championship.

Sergio Perez and Esteban Ocon were on hand to conduct car presentation duties giving the media and fans a chance to see the team’s 2018 challenger for the first time. Nikita Mazepin joined the race drivers for a photo call alongside Chief Operating Officer, Otmar Szafnauer, and Technical Director, Andrew Green.

The updated livery offers a more dynamic look for the team and builds on the strength of the pink identity that was introduced in 2017.

Otmar Szafnauer was the first to praise the fresh new look: “The VJM11 certainly looks eye-catching in its new livery. We worked very closely with BWT to deliver an even stronger identity for the car this year and everybody is really happy with the result. The new shade of pink is very striking and really pops out.”

The VJM11 was presented with new logos from petroleum brand, PEMEX, on the wing mirrors, while the team’s new lubricants partner, RAVENOL, displays its logo on the bargeboards. The engine cover sees branding from NEC as the Japanese ICT specialists extend their partnership with the team for a fourth year.

The long-standing partnerships with Claro, Infinitum and TelCel, continue in 2018 with all three brands prominently displayed on the VJM11. Similarly, the team’s relationship with Hype continues for a fourth season with branding on the nose and roll hoop, while long-term partner, Kingfisher, takes up a position on the engine cover and reverse of the rear wing. Branding from Industrial Engineering brand DUO is positioned on the car’s rear crash structure.

As well as new colours, the shape of the VJM11 will evolve considerably during the next month, as Andrew Green explains: “The DNA of the car is still very much that of last year’s car. We took the decision, quite a while ago, that the launch specification of the 2018 car would be based around our understanding of the 2017 car, but with all new structures required by the regulations in place. It is a starting point, a good reference from which to introduce changes quite quickly; it gives our aerodynamics department more time to develop a car for the first race in Australia, rather than having to release parts early for testing.”

After two consecutive fourth-place championship finishes, the team remains determined to consolidate its position in 2018, as Team Principal, Vijay Mallya explains: “I see no reason why we cannot consolidate our position and improve. Yes, Formula One is a very tough and competitive environment, but we are an established team with continuity in all areas of the company. We don’t take anything for granted, but we will be disappointed if we are not fighting for points at every race this year.”

The Pink Panthers are back 💕@ForceIndiaF1 unveil the #VJM11 in Barcelona #Unleash2018 pic.twitter.com/6MeSDG2ZtJ