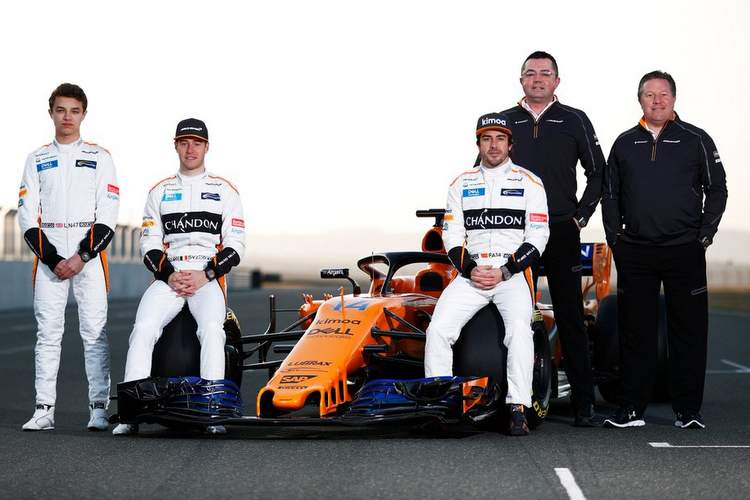 Phase one of the McLaren revolution took place early last year, now just over 12 months later the second phase of the rejuvenation programme is in place as the team launched the papaya orange MCL33 – the first of their cars powered by Renault.

The changes are mighty in terms of the power unit supply, while visually the team has paid tribute to their rich heritage in the sport by opting for the bright orange livery reminiscent of a time when Bruce McLaren still drove his own cars.

After three years in the doldrums, expectations are high and results demanded by the highest figures that now run the McLaren organisation.

Shaikh Mohammed bin Essa Al Khalifa, Executive Chairman and Executive Committee Principal, McLaren Group, said in the team press release, “The MCL33 represents a fresh chapter for McLaren – one that clearly embraces our evocative history while also serving to guide our future. We may have faced a tricky last few years, but this team has demonstrated time and time again that it emerges stronger from each and every challenge.

“And, for 2018, it’s not merely the colour of the car that marks the change: there’s a determination and commitment that exists within everyone who works at McLaren, and we’re fighting stronger than ever to return to the front.

“I also want to acknowledge the loyal support of our long-standing partners including Chandon, NTT Communications, Hilton, Richard Mille, Norton Rose Fulbright, SAP and all our official partners and suppliers.

“We have strong leadership, hugely experienced and talented people, new partners, and motivated, exciting racers behind the wheel. We are ready to race.”

“Off-track, we have been working as strongly as ever: this year’s car is the result of a fantastic amount of teamwork and effort, of which we can be hugely proud. As ever, this formidable team keeps pushing itself forward, and I applaud everyone at McLaren for their relentless commitment to the mission.

“It’s fantastic to be able to return McLaren’s grand prix cars to the classic papaya orange livery they once sported in the 1960s. They look incredible, and really underline the fearless spirit with which we attack the new season.

“As a team, we have always been at our best when we are at our bravest, and I think this is another example of that indomitable spirit.”

Zak Brown, Executive Director, McLaren Technology Group, said, The McLaren team was created by a brave pioneer, and has had bravery at its core ever since. Whether it’s been with brave drivers, brave leaders or brave fortune, this team has always fought back.”

“And we definitely view 2018 as the year when McLaren will move closer to the front, fighting teams and drivers as we improve our fortunes.”

“We have an excellent team, a new engine partner in Renault and a host of fantastic new partnerships: Airgain, CNBC, Dell Technologies, Kimoa and Petrobras have all been welcomed to the McLaren family.”

“Our return to a papaya orange livery for this year wasn’t simply an emotional decision; it demonstrates that we are listening to our fans, building deeper engagement with them and the Formula 1 community as a whole.”

“We want McLaren to earn respect on and off the track, and this felt like a good starting point. We want to show everyone what makes this team special, whether that’s our fans or our partners – there’s room for more on our journey,” mused Brown.

Eric Boullier, McLaren Racing Director said, “I think the whole team feels proud of this car. The design, engineering and aerodynamic departments have done an incredible job delivering a new car with a new power unit in an extremely short timeframe.”

“We never took the easy route or looked to shortcut a process or a solution; and the result is a car that is neat and well-resolved. That said, we are under no illusions that it will be difficult to splinter the hegemony at the front; and that the midfield will be full of well-funded, experienced outfits with plenty to prove.”

“We are humble about the challenge ahead, but feel we’ve prepared well, have a solid package that we can build upon and exploit as the season progresses, and have two excellent drivers who will make the difference in races.

“At McLaren, we are all racers – pure and simple. We’re going to come out pushing, and we’re going to be racing as hard as ever.” concluded Boullier