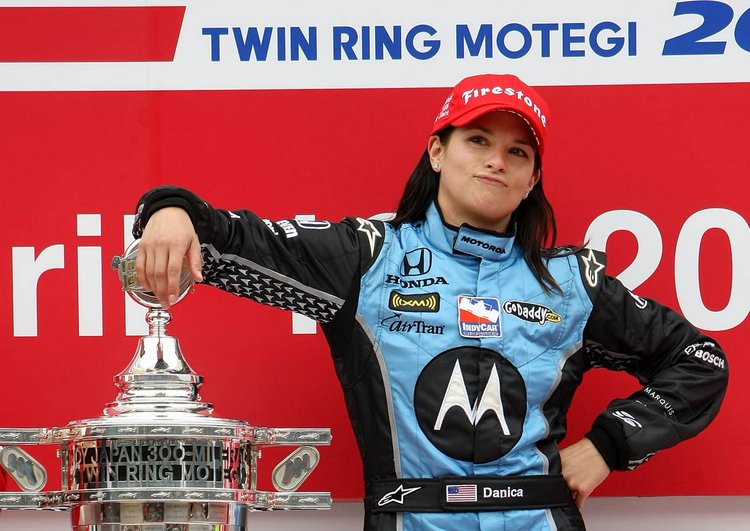 For years, I have defended Danica Patrick against men who have basically called her a prostitute for posing in a bikini for photo shoots.

I make that word plural because I think she posed once for FMH and twice for Sports Illustrated. A hugely vocal group of fans continue to say that the only reason Patrick has been driving for NASCAR and Indycar is that she has used her sexuality to promote herself and her brand. I have never seen a single complaint against male drivers posing shirtless or in nothing but a pair of briefs.

I say more power to her if Patrick chooses to use her physicality to market herself in a highly competitive business. Combined with her driving skills, this has helped her build a marketable brand and made her very wealthy. And despite the bikini shoots, Patrick has a squeaky clean reputation and is a heroine to many young girls and women.

Where are all the men who are outraged that there are no female drivers in F1? Do any of you guys vehemently supporting the grid girls’ “right to choose” feel as I do that Simona De Silvestro should have been given at least a 1-year contract to prove herself even if Bernie’s CVC had to help finance her?

I do. If F1 had helped a female driver get onto the grid, how many would have called it sexism? Would that have been “imposing someone liberal group’s societal norms” on you?

I think it would be great if Liberty Media said more about how they came to this decision, but you can be sure that they know which side their bread is buttered on. There must be some polling data showing that important demographic groups see the grid girls as a negative and that groups Liberty is targeting would be more receptive to F1 if the grid girls were gone. Or maybe someone at Liberty simply thought it would increase profits (something that ALL the teams have been demanding) if they didn’t have to pay for grid girls.

Personally, I enjoy seeing the grid girls. They beautify the scenery, and their outfits are generally tasteful and restrained. Still, there’s certainly an element of sexual titillation and objectification. I know, because being who I am, grid boys would just not be the same for me. Society is always changing and evolving. I welcome some of the changes and abhor other changes.

Lately, I see a lot that is ethically and morally disgusting, and I miss the days when people had sufficient character to do the right thing and keep society fully functional.

All in all, I think the elimination of the grid girls may be a tradition that some will miss, but I don’t see that it puts us on the slippery slope to a society where we can’t express ourselves freely, as some are saying.

Maybe Liberty Media will let us in on what their decision-making process was and what considerations factored into the decision. It’s more likely that they will choose not to open up that can of worms because they feel it is their business and they can manage it as they think best.

I’m not losing any sleep over this kerfuffle. (Thanks for the use of your word, David Hobbs.)