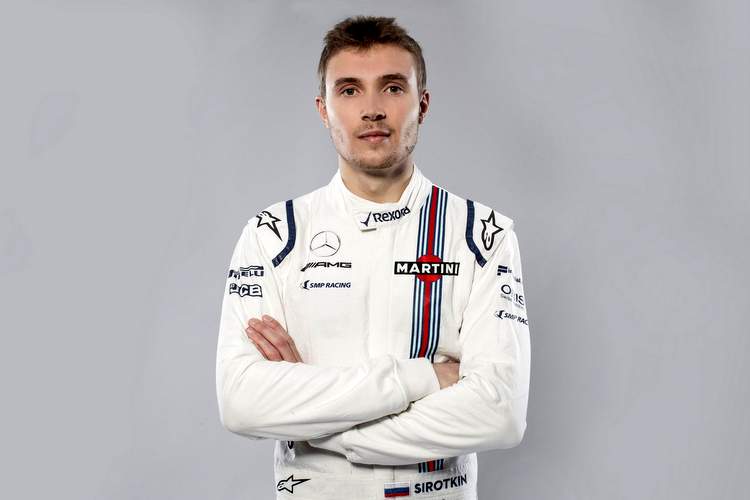 Sergey Sirotkin will be on the 2018 Formula 1 grid with Willimas who claim the Russian, who beat the likes of Robert Kubica, Paul di Resta, Daniil Kvyat and Pascal Wehrlein to the drive, was the best driver available for them.

Technical chief Paddy Lowe told media, “We selected [Sirotkin] as the best driver available to us, bar none. We are confident that he will be very quick, very consistent, very calm in his working. I think these qualities will take him a long way.”

Many believe that the 22-year-old Russian, who has hardly set the world alight in his junior career but has had substantial support from SMP Bank who paid (an estimated) $20-million for the privilege of having their driver line up beside Lance Stroll at Williams this season.

Asked if having one of the least experienced driver line-ups on the grid would hamper their season, Lowe insisted, “I would not describe it as a gamble. We understand that there are some disadvantages. For Sergey, there is a learning curve around that first year, particularly with some of the circuits he hasn’t been to before, but his performance stands in its own right.”

“One of the advantages of a younger driver is, if it’s a great driver, you’re investing in a long-term future and a long-term success that that can bring to him and to the team. We prefer to see that in Sergey we found a rising star, and we hope to work with him in the long-term and enjoy a lot of success together.”

“We don’t want to drive too much expectation, but we’re confident that Sergey will drive well, he’s shown himself able to do that, in our car and also in series in the past.

Lowe also acknowledged that the step up to Formula 1 these days has challenges which he believes that Sirotkin can overcome, “The tyres are more difficult, and these cars are performing at the peak levels never seen in the sport, so that must add its challenges.”

“But at the same time, we saw what Sergey can do in the car when we put him in there in Abu Dhabi, and those features didn’t seem to hold him back, so we’re confident he’ll do a great job,” added Lowe.

Interestingly Boris Rotenberg, the Russian billionaire co-founder of SMP Bank which finances the organisation’s motorsport project, is adamant that Sirotkin is not a pay driver, “I’ve always said that we do not strive for formula one because it is a very political story and it doesn’t work if support from various sides is lacking.”

Sirotkin apparently did what he had to do to tick all the boxes when he went head-to-head with Robert Kubica during the post season test in Abu Dhabi and Rotenberg pointed out, “He was faster than Kubica. That is for those people who say he bought a place for himself. That is a pure lie.”

“The boy has been working for this for five years since he joined the programme. Finance cannot play the decisive role. Naturally, there are costs. Motorsport is not cheap. It is not a toy for me to amuse myself,” added Rotenberg.

Big Question: Is Sergey the right driver for Williams in 2018?