De Ferran: There are a lot of great American drivers 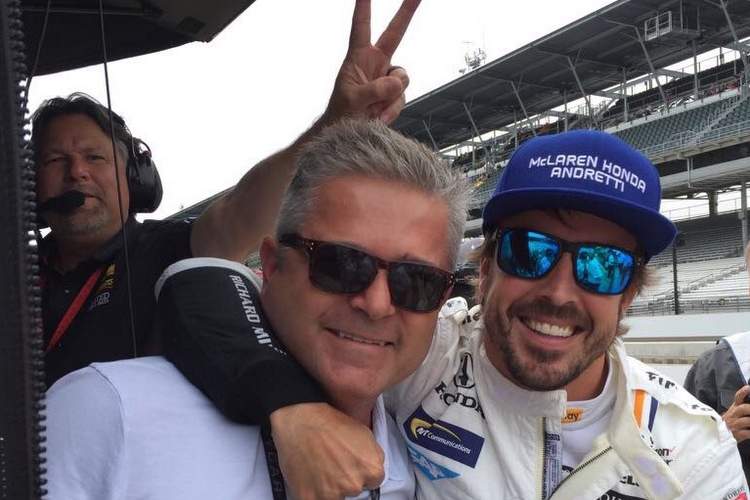 Indy 500 winner and multiple Champ Car champion Gil de Ferran is another former driver who has taken issue with Guenther Steiner’s claims that there are no American drivers currently on the scene who are ready to step up to Formula 1.

This past week Steiner caused an uproar stateside with his comments, prompting the likes of Mario Andretti and some current drivers to slam the Haas F1 chief for his comments and the American team’s lack of ambition to groom a local driver for Formula 1.

De Ferran (pictured above with Fernando Alonso) weighed in with his opinion, “I don’t think it is a fair point. There [are] a lot of great American drivers, the current IndyCar champion [Josef Newgarden] is a very talented driver. I think that a lot of the young American talent has grown, but is focused on the other branch of racing – stock car racing.”

“So you get guys that nowadays are older or retired – like Tony Stewart, Jeff Gordon, Jimmie Johnson – and they are supremely talented individuals. But early on they took this branch and, to be fair, it is very difficult.”

“A lot of top American talent is going on that branch of the big tree. So the pool is smaller than what it could be. Otherwise, I think [Alexander] Rossi is very talented, Newgarden is very talented. There’s a couple of other young guys too.”

The last high profile American driver to make a full switch from Champcar to Formula 1 team, was Michael Andretti’s ill-fated foray with McLaren alongside Ayrton Senna in 1993.

Over the years the likes of Canada’s Jacques Villeneuve and Colombian Juan Pablo Montoya made the switch from Indycar/Champcars to Formula 1 with success, but no Americans have followed a similar path.

Di Ferran explained, “It goes back and forth for many years. Some guys from Europe went on to the US and didn’t get on at all and vice versa. IndyCar and Formula 1 are different.”

“I think it’s more to do with the individual than anything else. Certainly [Sebastien] Bourdais had a stellar career in America and IndyCar and he was very good in single-seaters over here [Europe].”

“You know Sebastian Vettel beat him, but he beats Kimi Raikkonen too. It was rubbish, I guess, he wasn’t as good as Vettel but he’s a four-time champion.”

“But then you had [Juan Pablo] Montoya, who was very successful on both sides, and [Jacques] Villeneuve, who won a world championship. It’s down to the individual guys. In the same way that Nigel [Mansell] went over there [the US] and killed it,” added di Ferran.