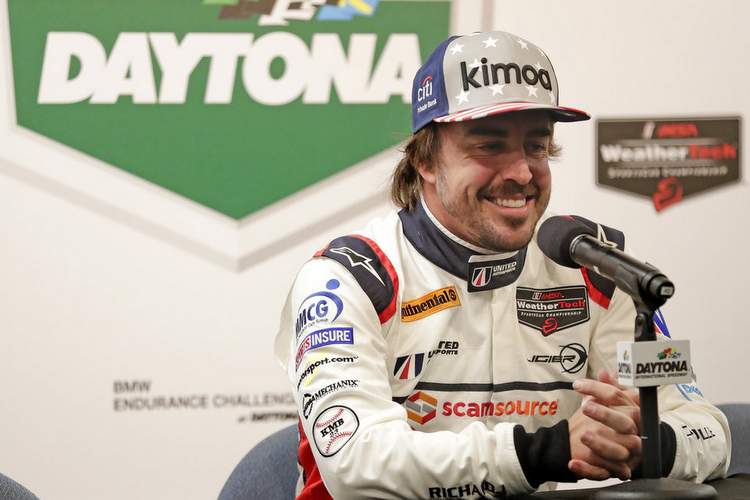 The Formula 1 star is entered in the Rolex 24 at Daytona, one of the most prestigious sports car races in the world, as the Spaniard attempts to cross another event off his bucket list. He skipped the Grand Prix of Monaco last year to race the Indianapolis 500, and his participation captured attention all around the world.

That Indy venture last May was his first time racing on an oval, his first time in an Indy car, and Alonso was dazzling until his engine blew late in the race. As he tested Friday for the Rolex 24, to be held on 26-27 January, he soaked in his newest venture.

“You feel, you smell motor racing here,” Alonso said. “That’s a good feeling for any driver. The speedway is amazing. The size is huge. I did only three laps this morning, yet enough to have a feeling in the car and on the speedway as well.

“The high banking was special. You feel the compression in the body, you feel the visibility change… it was good fun. The best feeling.”

Alonso was a surprise entry at Indy last year when McLaren boss Zak Brown gave him the green light to skip Monaco and knock “The Greatest Spectacle in Racing” off a list Alonso considers “iconic events.” Now he’s got permission to run the twice-around-the-clock race at Daytona – he’s driving a Ligier LMP2 in the Prototype class for United Autosports – and he hopes the same AloMania that swept Indy will follow him to this sports car event.

But the Rolex 24 draws a massive group of world-renowned racers, and Alonso is just another driver in a firesuit at Daytona. His two F1 championships are envied, but the field has plenty of accomplished racers.

“There are so many good drivers here from different series, and I think that’s the key to this race,” said 2016 IndyCar champion Simon Pagenaud. “The best drivers from everywhere come over here to do the first race of the year, to get warmed up and try to bring the big trophy home. It’s exciting to have Fernando, but exciting to have all the names.”

“Clearly he’s a racer. Obviously, he loves it, or he wouldn’t be doing all the things he’s doing,” Rahal said. “But all of us are, so hopefully the combination of everybody (racing) will help elevate the sport and sports car racing.”

He’s confident he will have the hang of it when he returns to race in three weeks, “It’s the same goal as Indianapolis: try to learn different driving techniques, try to learn from the specialists of endurance racing, try to be a better driver when the 24 hours finish.”

“So many new things will come step by step. It’s quite a big challenge. But like what happened at Indianapolis, if you feel the opportunity and you feel competitive, you go for it. As soon as you smell the blood, you go for it, like the sharks.”

Alonso led 27 laps at Indy driving for Andretti Autosport and was a contender for the win. His engine failed 21 laps from the finish.

It was still considered a massive success, for IndyCar, the speedway and the storied race because Alonso was so humble and charming during the buildup to the event. He’s made no secret of his desire to continue entering “iconic events” and has his eye on the 24 Hours of LeMans should his schedule permit.

“The main focus and priority for me is Formula 1 and winning the third world championship,” he said. “But to race in some iconic events and not disturb Formula 1 is also in the plan.”

“Doing this race is the first step in the endurance championship, learning how these races are and how much I (might) enjoy them. After the 24 Hours in Daytona, I will have a better understanding.”

“But LeMans 24 Hour and Triple Crown is another goal. If I can fit LeMans 24 this year, because I am not doing the Indy 500, that will be great. Hopefully the following year, the Indy 500 can be in the plan again.”

Well, Alonso said it’s not on his list right now, in part because of how much time he’d need to devote toward figuring out a stock car. Even so, after just one day at Daytona, he’s hooked and plans to be among the viewing audience for next month’s NASCAR season-opening Daytona 500.

“I imagine the grandstand full of people for the NASCAR race (Daytona 500) and that would be an amazing thing to experience,” Alonso said. “That is not my thoughts at the moment because NASCAR driving technique is very unique. I would need a lot of practice, a lot of test, before making that adventure, and at the moment I don’t have enough weekends free.

“But definitely after being here for the 24 Hours, definitely I will watch the race on TV and enjoy the NASCAR race.”