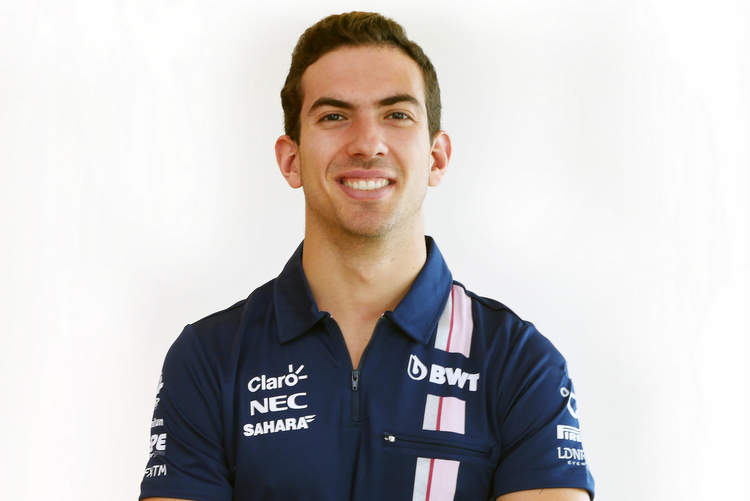 Canadian driver Nicholas Latifi will be Force India’s Formula 1 test and reserve driver this season with the 22-year-old also taking part in a number of Friday practice sessions at grand prix weekends.

The Silverstone-based team, who finished fourth overall in the championship last year, said Latifi would also carry out simulator work and feature in young driver test sessions during the year.

Latifi was a race winner and nine times podium finisher in Formula Two last year, ending up fifth overall. He has also tested for Renault.

“Nicholas joins us off the back of a strong season in F2 and strengthens our driver development programme,” said team principal Vijay Mallya in a statement.

“We have a long track record of bringing on young talented drivers and Nicholas will learn a huge amount as he gets embedded in the team, and looks forward to a career in Formula One.”

Force India’s race drivers are Mexican Sergio Perez and Frenchman Esteban Ocon, who is 21 and a rising star in the sport.

Sahara Force India is pleased to welcome Nicholas Latifi as the team’s reserve and test driver for the 2018 season.

The 22-year-old Canadian, a race winner and nine-time F2 podium finisher in 2017, will take part in young driver test sessions and participate in a number of Friday practice sessions at Grand Prix events.

Nicholas Latifi: “I’m really excited about the opportunity. Sahara Force India is a team that has shown constant improvement for the last few years and I’m proud to become a part of one of the success stories of Formula One. I am eager to show the team what I can do and help them as they continue to close the gap to the front of the grid.”

Vijay Mallya, Team Principal & Managing Director of Sahara Force India: “Nicholas joins us off the back of a strong season in F2 and strengthens our driver development programme. He will support our simulator programme and work with the team during a number of Friday practice sessions next year. We have a long track record of bringing on young talented drivers and Nicholas will learn a huge amount as he gets embedded in the team, and looks forward to a career in Formula One.”

Like most top drivers, Latifi started his motorsport career racing karts. He recorded regular success in his homeland of Canada, but soon realised he needed to move to Europe and go head-to-head with the world’s best drivers if he was to make the most of his natural talent.

He crossed the Atlantic to pursue a single-seater racing career in 2012 and instantly became an Italian F3 race winner, before claiming podiums and pole positions in the ultra-competitive British F3 series.

He also recorded an unbeaten four victories in the 2014 Ferrari Florida Series before graduating to Formula Renault 3.5 championship in 2015 where he impressed with his speed, ability and maturity.

Securing pole positions, fastest laps and a series of strong finishes in Formula Renault 3.5 gave Latifi the confidence to graduate to GP2 in 2016 and he immediately showed his potential by finishing on the podium at the first race of the season in Barcelona.

In 2017 Latifi was appointed test driver with Renault F1 team and contested the FIA F2 Championship in which he finished fifth.