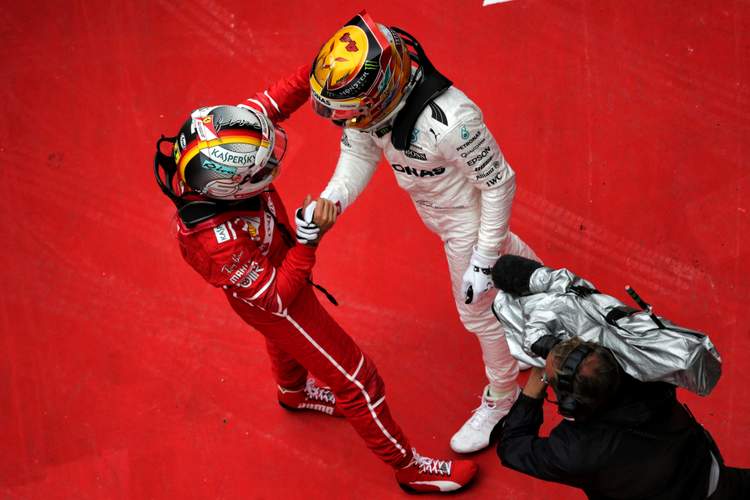 Formula 1 entered a new era in 2017 and next year promises another first even if Mercedes and Lewis Hamilton keep on winning.

The Briton’s fourth title, in the sport’s first season under new U.S.-based owners Liberty Media after the Bernie Ecclestone decades, has set the scene for an unprecedented battle on the track in 2018.

Never before have two quadruple world champions fought each other for a fifth crown but Hamilton and Ferrari’s Sebastian Vettel will be lining up to do just that come the Australian season-opener on March 25.

How they shape up will be fascinating to watch, with Hamilton staying remarkably cool and composed in 2017 while Vettel let the rising pressure get to him and occasionally blew his top.

Hamilton rewrote significant chunks of the record books in 2017, overtaking Jackie Stewart to become his country’s most successful driver of all time and first to take four titles.

He took his tally of wins to 62, more than anyone other than retired seven-times world champion Michael Schumacher (91), and eclipsed the German’s all-time record of pole positions to end the season with 72.

The 32-year-old scored in every race, while Vettel’s challenge faded amid collisions and mechanical failures.

Mercedes completed the championship double for the fourth year in a row, despite rule changes that made the cars faster and wider on fatter tyres.

Hamilton won nine of the 20 races while Ferrari’s Sebastian Vettel, the overall runner-up after leading until September, took five.

Ferrari, whose last driver’s championship was with Kimi Raikkonen in 2007, aim to be stronger in 2018 — when there will be one more race and the engine quota is reduced from four to three per driver.

“I can’t expect him to make the same mistakes,” said Hamilton before collecting his winner’s trophy. “I’ve got to make sure I‘m even better next year to stay ahead of him.”

With Vettel’s team mate Raikkonen nearing the end of his career and Valtteri Bottas some way off Hamilton at Mercedes, Renault must also raise their game if others are to enter the title reckoning.

The French manufacturer now has former champions McLaren on the list of engine customers after that team’s tortured relationship with Honda finally ended.

Spaniard Fernando Alonso, a double world champion who missed Monaco in May to try and win the Indianapolis 500, can hope to be back on the podium for the first time since 2014 when he was at Ferrari.

Honda, who could at least celebrate Takuma Sato becoming the first Japanese to win the Indy 500, now focus on Red Bull-owned Toro Rosso.

One of those victories proved a highlight of the season, with Ricciardo triumphant in Azerbaijan in a cracker of a race.

It was also a low point for Vettel, who collided with Hamilton behind the safety car in an incident of ‘road rage’.

“The worst feeling I had was after Baku I think, just because I sort of ruined the race with something unnecessary, so I struggled with that,” the Ferrari driver said.

Hamilton won the title in Mexico but singled out winning at Silverstone as a highlight because of the support he received from the home fans after the ‘negativity’ surrounding his absence from an earlier London event.

That free demonstration was part of Liberty’s plans to bring the sport closer to fans and raise the profile.

The jury remains out on their efforts, with teams concerned about a drop in revenues next season as a result of the increased spending.

There are also some big battles looming over the sport’s direction, with Ferrari warning they could walk away after contracts expire in 2020 if they do not like what is being offered.

Those who left the scene in 2017, apart from 87-year-old Ecclestone who was handed an emeritus title and attended only a handful of races, included retiring Brazilian Felipe Massa and Britain’s Jolyon Palmer.

The Malaysian Grand Prix also bowed out but France returns next season for the first time since 2008, and as part of an unprecedented triple header with Austria and Britain, while Germany is also back after a year’s absence.