Pippa Mann: A true step backwards from the FIA 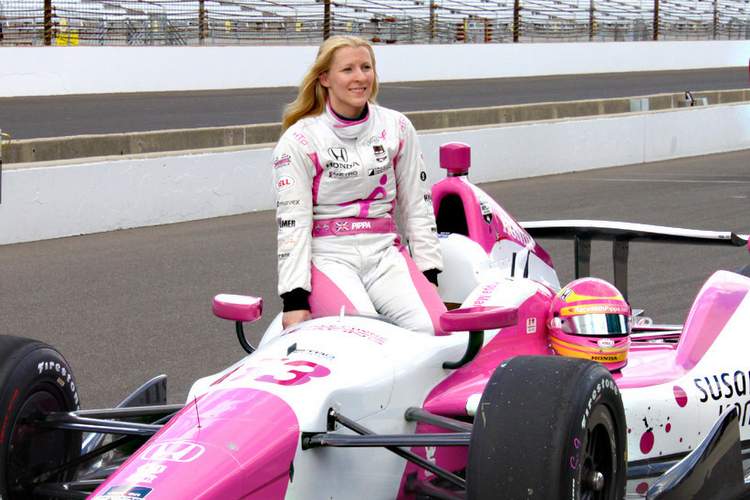 Six times Indy 500 contestant Pippa Mann revealed her disdain for the recent appointment of Carmen Jorda to the Women In Motorsport Commission claiming that the Spanish driver, who advocates separate Formula 1 series for men and women, does not reflect where modern female drivers are aspiring to reach in motorsport and has views that are opposed to the FIA’s policies on this matter.

Mann, who was named by Autocar as one of the top 100 British Women in the Car Industry, tweeted last week that she was disappointed and perplexed by the FIA’s decision to name Jorda “who does not believe we compete as equals” to represent women at the FIA.

Dear @fia,
If the news I am hearing is correct, and you have appointed a racer with no notable results, who does not believe we compete as equals in this sport, to represent women in racing, I am incredibly disappointed.
Sincerely -an #Indy500 qualifier, #IndyLights race winner.

In 2015 Jorda was appointed as a development driver for Renault which raised eyebrows among media and drivers at the time because her track record did little to merit such a promotion. Rally legend Michèle Mouton described the appointment as a “marketing gimmick” and suggested several other female drivers more deserving than Jorda.

Delighted to be appointed to the @FIA Women’s Commission & have the opportunity to represent & fight for women in motorsport. #DrivingChange pic.twitter.com/n27tuANmR9

Also in 2015 Jorda made this claim: “It’s not fair that women have to compete in the same championship as men, because we’re never going to become World Champion, and I think women deserve that chance.”

This statement is the crux of why Mann and a number of other female motorsport personalities are now up in arms over having Jorda represent their interests at the highest level.

In the wake of Jorda’s recent appointment Mann said, “Against this backdrop of current and rising female racing talent, it is extremely disappointing to learn that a racer with no notable results in any of the categories in which she has competed, and who believes and is quoted as saying that she does not believe we as female racers can compete, has been appointed to the FIA Women in Motorsport Commission.”

“To me personally, the appointment of someone with these core beliefs, to a committee meant to further the cause of women in racing, is incredibly disheartening and represents a true step backwards from the FIA. Most worrying of all, one wonders whether this appointment is in any way truly representative of their beliefs towards female athletes competing in motorsport in general.”

Since then Mann has had a swell of support, including backing from three times Le Mans-winning Audi race engineer Leena Gade who is also part of the Women In Motorsport Commission.

I’m in the commission, an ambassador 4 engineering. I’m addressing this with them b4 commenting further BUT I chose to compete in a man’s world, like so many other women in countless Motorsport roles. WE want to be the best against males & females. Can’t do that?Play another game https://t.co/P1uHC6SNlN

In the aftermath of the support for her stand, Mann told Racer, “Honestly, [the response] has been really surprising. This was obviously something that mattered to me quite deeply personally, as I fought fairly hard to take a stand on this.”

“We saw a lot of other female racers stand up earlier this fall when Carmen made her comment that she does not believe women can be equal.”

“Obviously that’s not what most of us feel in the sport, however to see someone with that opinion elected to this position to represent women in motorsport on the FIA Womens’ Commission was disappointing. It’s a very, very difficult situation.”

“I think the best thing that has happened since this appointment has been how strongly many of us – and not just female racers, but women who work in the sport and many male and female fans – have also stood up and said: This is not a good appointment for this position, for this reason.”

“To me, the most worrying thing is whether this is a reflection of the beliefs of the FIA towards female athletes in motorsport in general. It’s not personal with Carmen. It’s that someone who holds those beliefs should not be put in a position of power where the mission statement is the opposite of those beliefs.”

FIA president Jean Todt is quoted on the organisation’s website: “The FIA’s membership around the world comprises men and women; each has an identical part to play in sport. Like many international federations, we will support, promote and help advance the participation of women in motorsport to ensure equal opportunities at all levels.”

Clearly, Jorda’s views on the matter of women in motorsport are in stark contrast to the FIA’s mission statement which also sets out as part of their mission: “To create a sports culture which facilitates and values the full participation of women in all aspects of motorsport.”

In November Jorda said of the prospect of a women-only championship, “I believe a women’s F1 championship would give us the chance to achieve our dreams and compete on an equal footing – as in other sports. One day it will happen and it is the right thing to do.”

“They think because we are driving a car we are on the same level as men which is completely not true because we will never be the same as them.”

“I have had to fight through many things to get to the top of this sport, just because I am a women, and that is not fair,” added Jorda who failed to finish higher than 13th in three years of GP3 and never finished higher than tenth during her five Indy Lights race starts in 2010.

This year at the Indianapolis 500, Mann’s Fast Friday time of 230.103 mph in the Dale Coyne Racing Honda made her the first woman to break the 230 mph barrier around Indianapolis Motor Speedway. She finished 17th in the race, which was also her only Indycar appearance in 2017.

Big Question: Is there a place for a women-only Formula 1 championship?