Prost: On paper we cannot beat Red Bull or McLaren 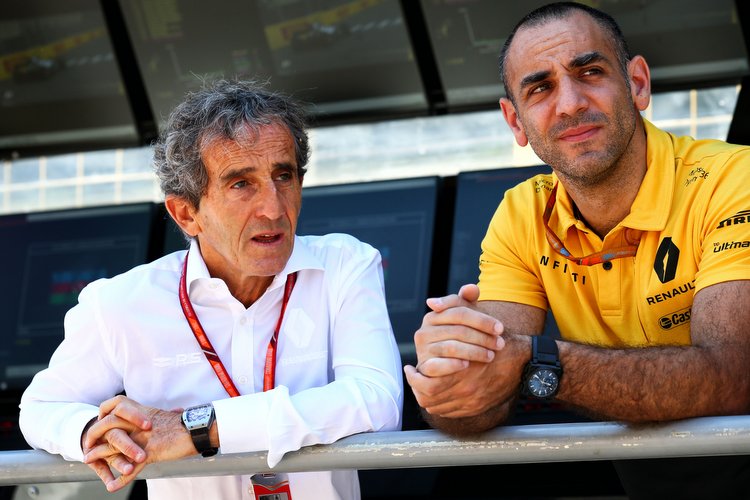 Formula 1 legend Alain Prost is Renault Special Advisor who was a constant figure hovering in the in the paddock at grand prix races this past season, in an in-depth interview he spoke about the season past, the future supplying two of the sport’s biggest teams and on the drivers of today.

With regards to the 2017 season where Renault missed their targets, Prost said, “I did not think it was wise to target fifth place at the start of the season. Of course, you have to set goals but in my case, but I think it’s wrong to run after a number.”

“It is more important that the timeline is correct and that the team evolves to achieve what we want to achieve someday in the future. You also have to look behind the scenes. We finished in 6th place and of course that’s not what we wanted, but even so without meeting our target of fifth place, I am satisfied with the development of the team.”

“Let’s not forget, that after the acquisition of Lotus, Renault practically started from zero. I’ve always said that it will take time and maybe more time than we think, but a lot has happened in the last two years. We have many good people on board. Young, talented engineers, but they cannot get results right away.”

“You have to work together, to fit in. The team needs to stabilise and possibly modify work processes. I know that from my own Formula 1 team 20 years ago. We started with 60 people and when we stopped we had 250.”

“It is a long process and Renault is currently in this rebuilding phase. You cannot expect much better results than what we have achieved. We should not put too much pressure on this phase, that will come by itself as we progress up the field.”

Renault were the pioneers of the first Formula 1 turbo era and have had an almost constant presence at the pinnacle of the sport since the late eighties.

Prost recalled, “In the eighties, Renault had a bad image in terms of the reliability of its cars. They entered Formula 1 with a new [turbo] technology, a real adventure at the time, they won races and almost the World Championship, and they made the turbo engines competitive and acceptable.”

“Now, the image of the brand was a completely different one. Renault sells cars all over the world today, together with Nissan and Mitsubishi we are the largest automotive group in the world. We must, therefore, be successful in Formula 1.”

“Maybe winning is not as important as for a premium manufacturer like Mercedes, but our goal must be to eventually finish at the top.”

Pressure is on Renault in 2018 as they supply two big teams – Red Bull and McLaren – and thus the focus on them will be even more intense, while the onus on delivering competitive and reliable engines is greatly augmented.

Prost believes this scenario will work in favour of Renault, “For me, that’s a positive pressure. Although it is tough. The factory team will race against two well-established teams next year and both have top drivers, maybe even the best. On paper, we cannot beat Red Bull or McLaren but for sure we will be better next year.”

“The comparison with the customer teams will help us to gain experience in order to get closer to the top teams. We are here for the long haul and thus it is important that we make progress every year. In the end, we will have to beat everyone if we want to win.”

Renault have lagged behind Mercedes and Ferrari in both performance and reliability of their power units and the gulf between the sharp end of the grid to midfield, where Renault find themselves, is massive.

Prost acknowledged, “It’s a huge gap, especially with the cars of today. You cannot, as in the past, reinvent the wheel. You cannot test every week to catch up. The difference is mainly in the chassis and you will not catch up in a year.”

“We all know that the last three-tenths are the hardest and that’s the reality. This is a lengthy process, just look at the cars. They are so complex, the workmanship so precise, the shapes so elaborate that you cannot master that in an instant.”

Prost raced in an era packed with Formula 1 greats such as Senna, Piquet and Mansell who captured the imagination of fans and are entrenched in the folklore of the sport.

Asked if the current generation of F1 stars compare, he replied, “Definitely, not only do we have driving talent, we also have different characters in the field, as we did then. Hamilton, Verstappen, Vettel, Alonso, and Ricciardo.”

“The difference to those days is that not all of these drivers today have a car to win. If you sit in the wrong car, you have no chance. At that time, we were able to make up the deficit if our car was not quite there. That is no longer possible today, just look at Alonso.”

Nico Hulkenberg had a chance to sample a 1983 Renault RE40 earlier this year, and was amazed at how difficult the cars of that era were to drive.

Prost elaborated, “I have not driven a current car yet. Yes, these cars today are really easier to drive. Just an example, I looked at Brendon Hartley on his first day of practice in Austin. He got involved incredibly fast and drove very well. That would not have been possible in our time.”

“But today we also experience the same thing with modern road cars, now they are much more comfortable and easier to drive than they were 30 years ago. These days Formula 1 cars are undoubtedly much faster, but also far more comfortable to drive.”

“We still had to change gears manually, had less downforce, but more mechanical grip. That could well be a better solution for the future of Formula 1,” added Prost.

Big Question: Will Renault be capable of beating Red Bull or McLaren in 2018?