Hamilton: Matching Fangio would be quite cool 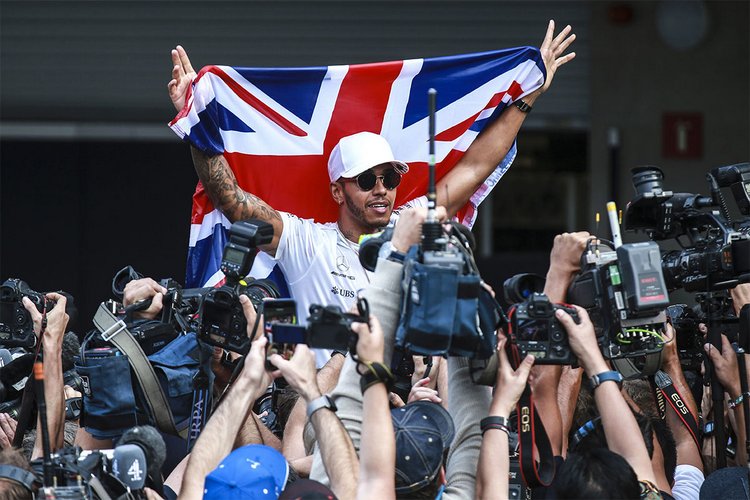 2017 World Champion Lewis Hamilton wants to equal Juan Manuel Fangio’s five Formula 1 world titles but is not so sure he will have the staying power to attempt to match Michael Schumacher’s all-time record of seven titles, but he did not rule it out entirely.

The Mercedes driver, talking to reporters in Paris before a gala awards evening at the Palace of Versailles on Friday where he will be presented with the champion’s trophy for a fourth time, said he wanted more.

“We definitely have more championships to win together,” said the most successful British driver of all time who won his first title with McLaren in 2008. How many more he might achieve remained an open question, however.

“It’s taken me 10 years to achieve this four. I currently still don’t have that desire to match it (Schumacher’s seven). Matching Fangio would be quite cool,” he said. “Given that I’m going to be here for at least another couple of years, that’s my goal. To try and at least get that.”

Fangio, who won all of his titles in the 1950s and died in 1995, was Formula One’s most successful driver until Germany’s Schumacher surpassed the Argentine great’s tally in 2003.

Hamilton said he would not be defined by the number of championships he had won, but more by how he had driven and raced over his career, what he had extracted from the car and reacted with the team.

“Who knows,” he added. “When I was younger I thought I would have a family at 28 and I got to 28 and it all shifted. So it’s difficult to say never.

“Maybe in a couple of years’ time, I’ll be like: Gee, I want to do another 10 years. I really hope that that’s not the case,” laughed the 32-year-old, “Because then I’ll be with you guys when you’re in Zimmer frames.”

At the same winner’s news conference a year ago, Hamilton’s then-teammate and 2016 champion Nico Rosberg announced that he was retiring.

Hamilton’s motivation to continue has often been questioned, even on Friday by FIA president Jean Todt, but there were no bombshells this time.

The Briton said instead that he appreciated every race, knowing that a time would come when he would no longer be competing.

“I love the racing. There’s definitely bits that I don’t love about some of the surrounding stuff,” he smiles. “But being in the car, and working with the team, there’s nothing quite like it.”

Hamilton enjoyed rare reliability in 2017, finishing all the races and winning nine while Ferrari’s Sebastian Vettel, the overall runner-up, took five after a late spate of mechanical failures and collisions.

The Briton said he expected the German, also a four-time champion, to raise his game next year and he would have to do the same, “I can’t expect him to make the same mistakes. I’ve got to make sure I’m even better next year to stay ahead of him.”