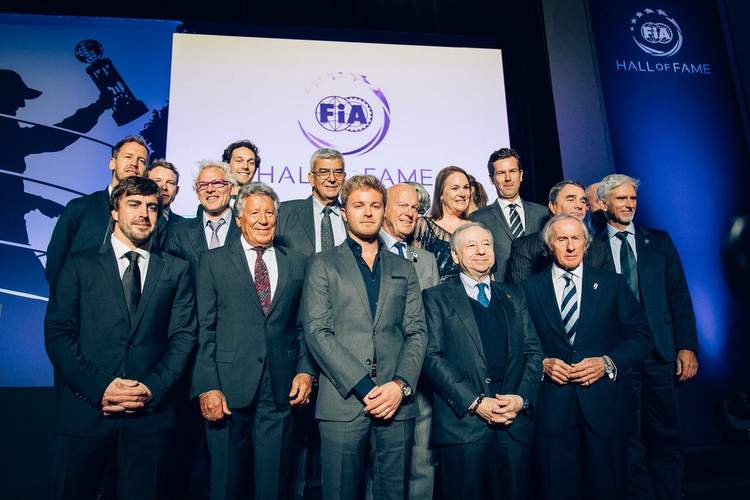 Formula 1 stars of past and present attended the FIA Hall of Fame induction ceremony at the Automobile Club De France, in Paris on Monday night.

On the night the FIA’s president Jean Todt inducted 33 motor racing legends into the organisation’s newly created Hall of Fame, with the launch event attracting a host of stars to celebrate the occasion.

Todt said, “The FIA Hall of Fame has been created to highlight the values that run through motor sport and the champions who have been and who still are the exemplars of the FIA’s values of commitment, integrity, respect and sportsmanship.”

“This is the first stage of an ambitious project: the FIA Hall of Fame will soon expand to the FIA headquarters in Geneva, and other champions and other disciplines will be in the spotlight in the coming years.”

“In this way, we will celebrate all the FIA champions who have made, and who still make the history of motorsport so incredibly rich and inspiring,” added the FIA president.

The 2016 Formula 1 World Champion Nico Rosberg was in attendance, as were multiple F1 world champions and current drivers Fernando Alonso and Sebastian Vettel.

The German commented, Vettel said: “It’s been incredible to see all these names, all these faces. Obviously a lot of them I only know from what I have read, what I have seen, but I think it’s a great idea.”

“There’s so much history in the sports, it’s still so alive, and thanks to events like tonight’s, we’ll keep it like that. I love racing but as you get older you change your way of thinking and I think your appreciation for things and definitely for things like tonight grows,” added Vettel.

“An emotional night,” Alonso wrote on Twitter. “Great honour to be part of the Hall of Fame of the FIA. Share space with the great drivers of the history of the sport that I love.”

Mansell said, “I’d like to thank the FIA for making this evening possible for all of us. It’s such a special evening. I’d also like to congratulate all the other drivers here, truly they are all tremendous.”

Hill, who in 1996 followed in the footsteps of his double title-winning father Graham, added, “It was always very difficult to get it through my head that I’d become a world champion at all, so the thrill continues, and it just an amazing honour to be included.”

“You see the people who are here and the names mentioned – Mario Andretti, Nigel Mansell, Alain Prost and Sir Jackie Stewart and it’s hard to believe I’m in the same gang. So, congratulations to the FIA for instigating the Hall of Fame and thank your for including me,” added Hill.

Finally, the sport’s most successful competitor, seven-star driver Michael Schumacher, was inducted, with long-time manager Sabine Kehm on hand to accept his award.

“We all know Michael should be here and I am totally sure he would love to be here,” she said. “He always had the highest respect for everyone in this room and he would be very honoured. What made Michael so special, what made him so successful was, as with everybody in this room, a love and passion for this sport.”

The FIA have awarded the Hall of Fame accolade to every drivers’ F1 World Champion since the first championship in 1950 which was won by Giuseppe Farina.

One notable absentee at the function was Lewis Hamilton who missed the Paris ceremony to attend the 2017 Fashion Awards at London’s Royal Albert Hall on the same night.

Couldn’t resist a selfie with two of the nicest guys ever… Damon Hill @HillF1 and David Brabham @brabsracer. At #FIAHallofFame pic.twitter.com/OaK5S3Ho5i

Emotional launch of the @fia Hall of Fame tonight with the @F1 world champions and their family representatives. Such a memorable day ! pic.twitter.com/apez68jXcv

An emotional night at FIA in Paris. A great honor to be part of the Hall of Fame. #HallOfFameFIA #thanks 🙏 pic.twitter.com/M17fWeiDPf