Reader Rights: Speak the Language? Dust Off Your Ferrari 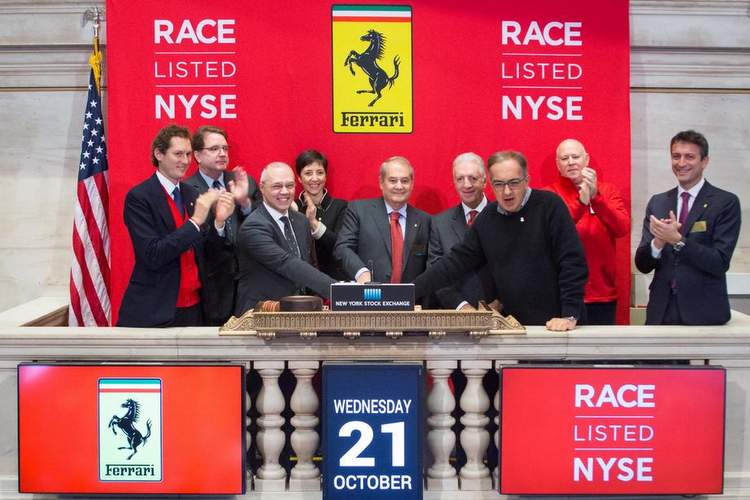 So, what is this thing we so loosely refer to as Ferrari? Posters at the GP24/7 forum frequently refer to Fiat ownership and profits from the sale of Jeeps when prognosticating about what the Ferrari F1 team will do in the near future.

In fact, Ferrari is financially separate and distinct from Fiat Chrysler Automobiles (FCA). The only link between the two companies is the fact that Sergio Marchionne serves as CEO of both of them. Here are some Ferrari facts gleaned mainly from reliable sources on the web.

Please feel free to offer corrections, but be forewarned that much of what is posted out on the web as fact is sorely out of date.

What is Ferrari in a corporate sense?

Ferrari NV, known as Ferrari, is an Italy-based designer, manufacturer and retailer of sports cars that is incorporated in the Netherlands. It operates under the Ferrari brand. The company offers financing services through Ferrari Financial Services. It also produces limited series and one-off cars. The company divides its regional markets in EMEA (Europe, the Middle East, India and Africa), Americas, Greater China and Rest of APAC (Asia-Pacific region, excluding Greater China) and is active in over 60 markets worldwide through a network of authorized dealers.

Who is Sergio Marchionne?

Sergio Marchionne (born June 17, 1952) is an Italian-Canadian executive who is currently the Chairman of CNH Industrial, the CEO of Fiat Chrysler Automobiles, the Chairman and CEO of Ferrari and also Chairman of Maserati.

Additionally, he is the Chairman of Swiss-based SGS and he was the non-executive Vice Chairman of the Board of the global banking group UBS from 2008 to 2010, as well as the elected Chairman of the European Automobile Manufacturers Association for 2012 (first elected in January 2006).

He is also a member of the Peterson Institute for International Economics as well as Chairman of the Italian Branch of the Council for the United States and Italy. Finally, Marchionne is on the board of directors of Philip Morris International, a major corporate sponsor of the Ferrari F1 team.

Marchionne has earned a reputation for being blunt and outspoken, which has drawn both praise and criticism.

In a 2009 Forbes interview, Massimo Vecchio, an analyst with Mediobanca, commented Marchionne’s controversial management style, stating: “He’s got a lot of American in his management style. The only thing that matters to him is results. If you don’t deliver, you are out. He is quite ruthless. When Marchionne took over the company [Fiat], he was literally firing one manager a day but there was a leadership problem and nobody wanted to take hard decisions. The communication from bottom to top in management was slow and wrong. He also changed that. He reduced the layers of management and gave his role a more direct view of what the business was doing. And of course his ego is very big and sometimes people who had clashes with him were basically fired. Looking at his style from outside it seems awful, but he delivered.”

As the prospect of a Ford purchase of Ferrari fell through, FIAT approached Ferrari with a more flexible proposal and purchased controlling interests in the company in 1969. Enzo Ferrari retained a 10% share, which is currently owned by his son Piero Lardi Ferrari.

The supercar division accounted for 12% of Fiat Chrysler’s profit before interest and tax in 2014.

Fiat Chrysler Automobiles (FCA) sold 10% of Ferrari in an initial public offering. FCA retained 80% of the Ferrari stock which had a market value of about $7.3 billion. The remaining 10% belonged to Piero Ferrari, the son of founder Enzo Ferrari.

Fiat Chrysler Automobiles (FCA) distributed to shareholders its remaining 80% stake in Ferrari. Investors received one Ferrari share for every 10 FCA shares they owned. Ferrari NV was listed on the New York Stock Exchange in October 2015.

Marchionne, who is also Ferrari’s chairman, has been positioning the supercar manufacturer as a creator of high-end products, rather than as an automaker, to entice stock buyers. Approximately thirty Ferrari boutiques exist worldwide, with two owned by Ferrari and the rest operating as franchises. The stores sell branded clothes, accessories and racing memorabilia. Clothing includes upscale and lower-priced collections for men, women, and children.

As of 2016, the estimated total of Ferrari built and sold cars throughout its entire company history was about 195,000. Ferrari production increased to 8,014 vehicles in 2016 resulting in complaints from past and current customers that the brand was losing its exclusivity and hurting the value of Ferrari vehicles purchased.

A Snapshot of Ferrari NV Market Performance from 2 December 2017

Ferrari NV’s market capitalization (the market value of the company’s outstanding shares) is currently just over $20 billion. As can be seen from the chart above, this can vary widely as the stock has a 52-week high of $121.12 and a 52-week low of only $53.94. The third quarter 2017 profitability numbers have been described as being “as predicted” but disappointing.

Ferrari S.p.A. operates as a subsidiary of Ferrari NV.

“Scuderia Ferrari S.p.A. competing as Scuderia Ferrari” is the official name of the racing division of the luxury Italian auto manufacturer, Ferrari, and the racing team that competes in Formula One racing. The team was initially based in Modena from its pre-war founding until 1943, when Enzo Ferrari moved the team to a new factory in Maranello in 1943. Both Scuderia Ferrari and the Ferrari road car factory remain at Maranello to this day. The team owns and operates a test track on the same site, the Fiorano Circuit built in 1972, which is used for testing road and race cars.

In 1987, Ferrari considered abandoning Formula One for the American IndyCar series. This threat was used as a bargaining tool with the FIA – Enzo Ferrari offered to cancel the IndyCar Project and commit to Formula One on the condition that the technical regulations were not changed to exclude V12 engines. The FIA agreed to this, and the IndyCar project was shelved, although a car, the Ferrari 637 had already been constructed.

In 2009, it had emerged that Ferrari had an FIA-sanctioned veto on the technical regulations which had not been made public.

The F1 Group’s overall profits ($1.36 billion this year) are divided so that the F1 Group stockholders receive 50% as their profits, and the teams receive 50% for the prize money fund. The prize money fund is divided into “columns” according to performance (points), participation, and “team of long-standing” status. The teams of “long-standing” are Ferrari, Mercedes, Red Bull, McLaren and Williams.

The 2016 profits get distributed to teams at the end of the 2017 season. There’s always a one-year delay. In the 2017 distribution currently being made, Ferrari will get the basic $42 million for participating, $56 million for points earned, and $20 million from the special bonus fund for “long-standing” teams.

That last $20 million comes from the F1 Group fund, NOT the teams’ prize money fund. In addition to this, Ferrari also receives a unique bonus of 2.5% to a special contract with the F1 Group. In recent years, this bonus has been worth as much as $100 million. This year, Ferrari will get $90 million. No other team receives a similar bonus.

Again, this $90 million comes NOT from the teams’ prize money fund but from the F1 Group’s profits. Presumably, if Ferrari’s special bonus were to be ended tomorrow, that money would be distributed to the F1 Group’s stockholders, not to the other teams. That would maintain the 50/50 split of profits and remove any advantage Ferrari might be gaining from the special bonus.

If all five of the “long-standing” lost their bonuses, that money would also revert to the F1 Group’s fund, not to the teams’ fund. Bear in mind that these teams do not all receive equal bonuses.

So, for this year, Ferrari will receive a total of $208 million from Formula One. The total Ferrari F1 budget has been estimated by one source to be around $360 million. (Again, it’s very difficult to find reliable numbers as different sources tend to disagree.) That would mean that the remaining $152 million would have to come from sponsorship income, from Scuderia Ferrari’s own coffers, or from the parent corporation, Ferrari NV.

Santander has announced that it will not be a Ferrari sponsor beyond the 2017 season which could represent a loss of $47 million in sponsorship. Philip Morris International sponsorship (Marlboro money) is rumoured to be around $100 million.

That money is probably safe since Sergio Marchionne  is on the PMI board of directors, and Maurizio Arrivabene was a Vice President at PMI before being brought to Ferrari by Marchionne. Add all of those numbers up, and you have $355 million of the reported $360 million Ferrari F1 budget for 2017.

These figures are “guesstimates” based upon internet reports that are often no better than rumors, but it would seem that Scuderia Ferrari has been largely self-funded and has not been much of a financial drain upon the Scuderia’s resources or on those of the parent corporation Ferrari NV.

Most observers are expecting Liberty Media to end Ferrari’s “unique bonus” of $90 million when the current Concorde Agreement expires, and the Scuderia would need to source that money from somewhere unless it reduces its operating budget significantly.

It might also lose the $20 “long-standing” team bonus. Since Mercedes is already spending significantly more than the present $360 million Ferrari budget, it will be even harder for Ferrari to win a championship unless Mercedes withdraw from Formula One or budget caps are imposed.

In case you have felt you have good advice to offer Scuderia Ferrari, S&P Global Market Intelligence reports that they may be reached here by phone: 39 0536 94 911

Mr. Marchionne may or may not be available when you call….