Ricciardo: Lewis maintained a cooler head than Seb this year 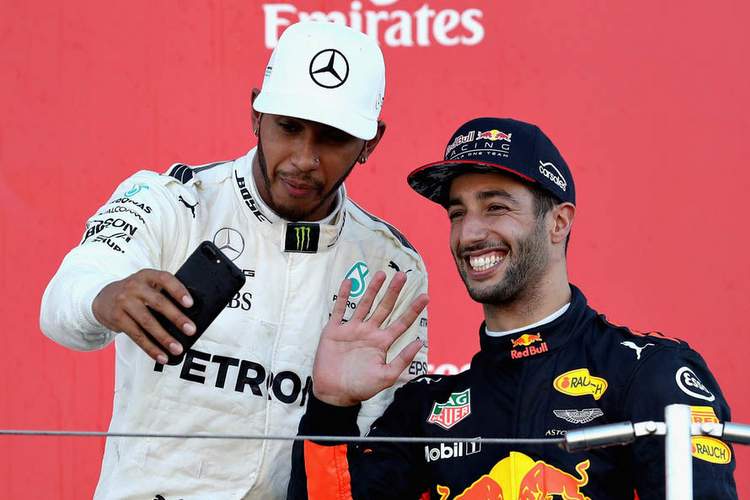 Daniel Ricciardo respects Lewis Hamilton for the way he went about winning the 2017 Formula 1 World Championship. but also wishes that the difference in car performance was not so great so that drivers, like himself, are within at a better chance of contending for victories and ultimately the title.

Speaking to reporters during a media event in Baku, Ricciardo said, “Looking at Lewis’ season, I respect that. For sure he had a good car but I think Seb’s car was also as good and Lewis maintained a cooler head and a better level of consistency and composure. You have to respect that. In the heat of battle, he was always very calm and he drove a very good season.”

Asked who was the best driver in Formula 1, Ricciardo said with a smile, “I think I would take myself out of this because I am for sure the best!”

And added, “Lewis, even with the best material, he still had pressure and expectations and he’s had that since he started F1 ten years ago.”

“I think he’s always been on a very high level and he’s also got a lot of other distractions in his life and can still perform when it counts. I respect him and take my hat off to him — as a driver he is very competitive.”

“Obviously there’s also Fernando [Alonso], but it’s hard to say with Fernando the last few years because he hasn’t had a top car to know. But I think everyone still believes he is one of the top drivers on the grid.”

“These are the two names that will always get called up in this current group of drivers. My teammate Max is very strong as well, so there’s more than two, but these are the established ones who are very well respected.”

“The car is a big part of it, but you need to be a good driver to get the equipment to the top. You need both. It’s still a bit more dominant with the car than the driver, I’d say maybe 75 percent to 25 percent.”

“If we make it a bit more equal by bringing the driver in a bit more and taking the equipment out then that would be better. A 50/50 would be something more realistic in the near future and hopefully, that’s the case.”

“Even from Lewis to the guy that’s coming last, maybe the lap time says three seconds but the driver is maximum one second.”

“We are all a lot closer than that and it would be great if we could all stay within one second with the equipment because then the racing would be pretty fun,” concluded Ricciardo who finished fifth in the 2017 championship.