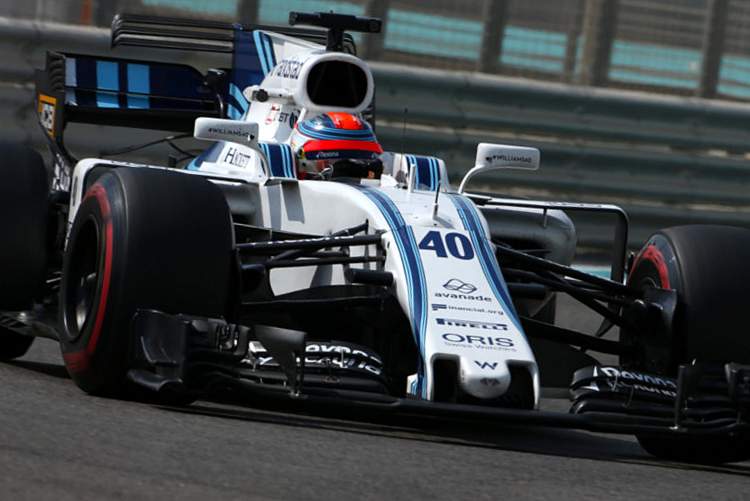 Robert Kubica kept on course for a Formula 1 comeback after ending the final test of the year on Wednesday with the quickest lap by a Williams driver over the two days at Yas Marina Circuit in Abu Dhabi.

The 32-year-old, who has not raced in Formula 1 since a 2011 rally crash but is favourite to replace departed Felipe Massa, was seventh fastest overall on the second day of a Pirelli tyre test.

Sergey Sirotkin’s best of 1:39.947 on Wednesday morning was on the soft compound. Kubica was 1.3 seconds slower on that compound on Tuesday.

Williams technical director Paddy Lowe told reporters that the times could be misleading, “I’m not gonna talk about speed. I’m sure you want me to give some answers about that but it’s not something we are not going to discuss.”

“It’s a really complicated topic, performance and speed, so to read a timesheet is quite misleading. So I’m not going to talk about that. We haven’t even analysed it for ourselves.”

Lowe was clearly impressed with Kubica, “He’s a very, very professional guy, very knowledgeable, very experienced, and that was a great benefit during these evaluations.”

“We wanted to see Robert as he hasn’t driven a current car, or current tyres, so of course it was interesting to see how he got on with that. No problems. He’s absolutely fine. Good driving, no complaints, no issues. All went well.”

Several drivers are vying for the most coveted seat still available on the 2018 Formula 1 grid, including Paul di Resta and Daniil Kvyat.

But keeping to the script they outlined a month ago, Lowe insists, “We’ll take the decision at the time we are ready. When we have all the information and we are ready to declare it.”

“The drivers we brought to this test doesn’t mean that it’s the drivers under consideration for racing next year.”

“This was a tyre test, which is an opportunity to look at two different drivers as well as for Lance to look at the new tyres. That was the purpose.”

“Of course it gives us more information about drivers, but it’s not setting a definition from the pool from which we will pick race drivers,” added Lowe.

Kubica, who partially severed his right arm in a freak rally accident at the start of the 2011 season, completed 100 laps on Tuesday and 28 laps on Wednesday.

He told reporters after the first day that he felt “confident and comfortable” in the cockpit of the Williams FW40.

Ferrari’s Sebastian Vettel was top of the overall timesheets at the end of the final day, which brought the 2017 season’s track action to a close.

Big Question: Has Robert done enough to earn a return to the F1 grid with Williams in 2018?