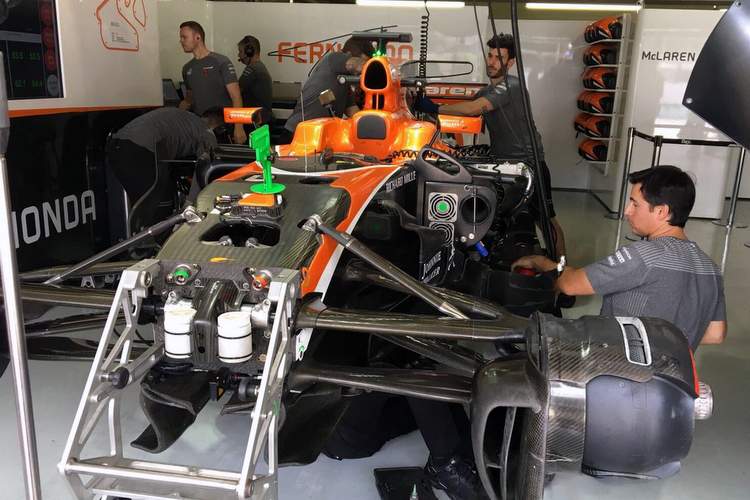 A look back on the technical side of the grid at the season finale Abu Dhabi Grand Prix, Round 20 of the 2017 Formula 1 World Championship, at Yas Marina Circuit in the United Arab Emirates.

Renault arrived in Abu Dhabi with the aim of finishing sixth in the Constructors Championship, and its performance in doing so was impressive. The R.S.17 was the fourth fastest car in qualifying by a close margin, but convincingly so in the race, an area of struggle earlier in the season. 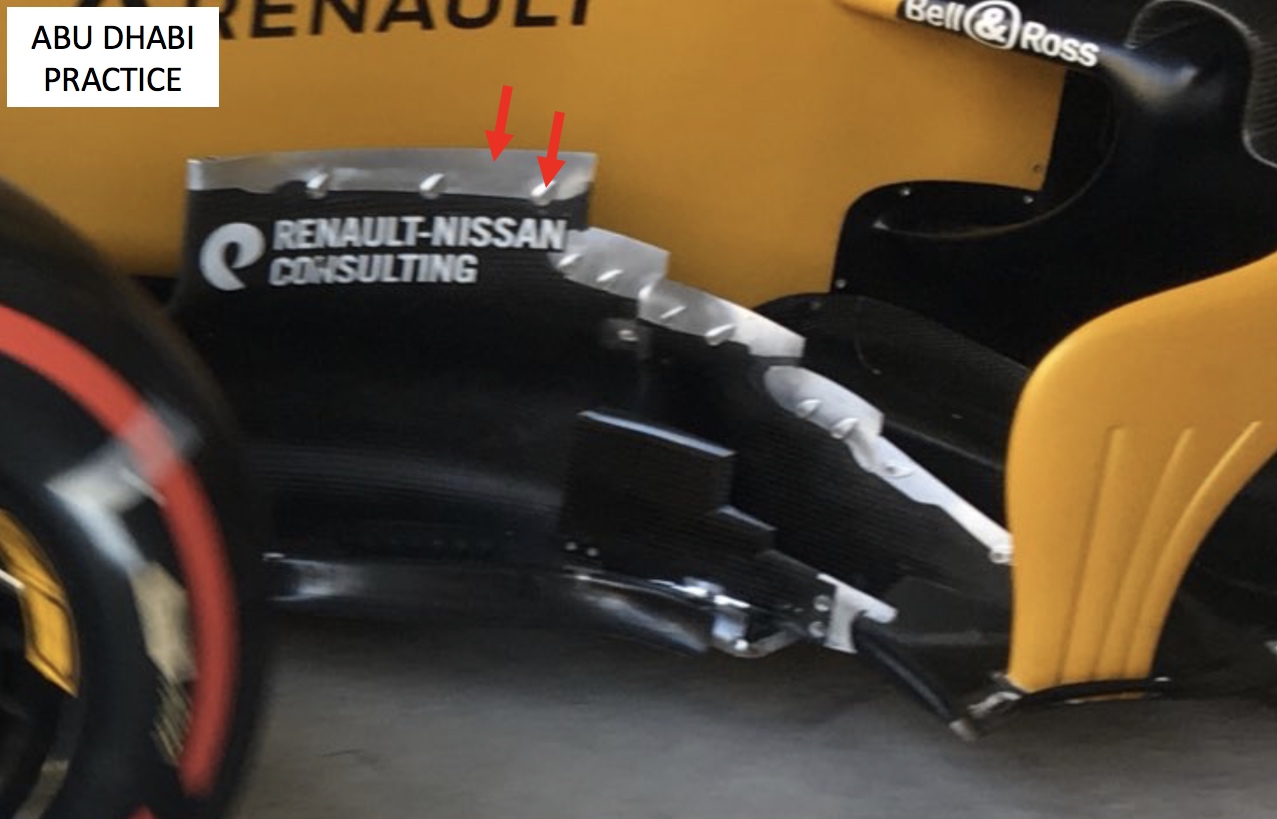 While the outfit’s focus was more on the race weekend itself than 2018 development, unlike other teams, the Enstone team did try out a modified bargeboard, with the top part’s material being altered from carbon fibre to a metal. The bargeboards, especially with the new rules, are subject to a reasonable force due to the pressure differential either side of their wing-shaped cross section.

In light of this, Renault may have been experimenting with methods to reduce tip deflection, and ensure that the parts carry out their desired function at all times. Clearly, the screws used to attach the aluminium to the carbon fibre are a makeshift solution, so if this material combination is decided on for 2018, a much more integrated solution will result. 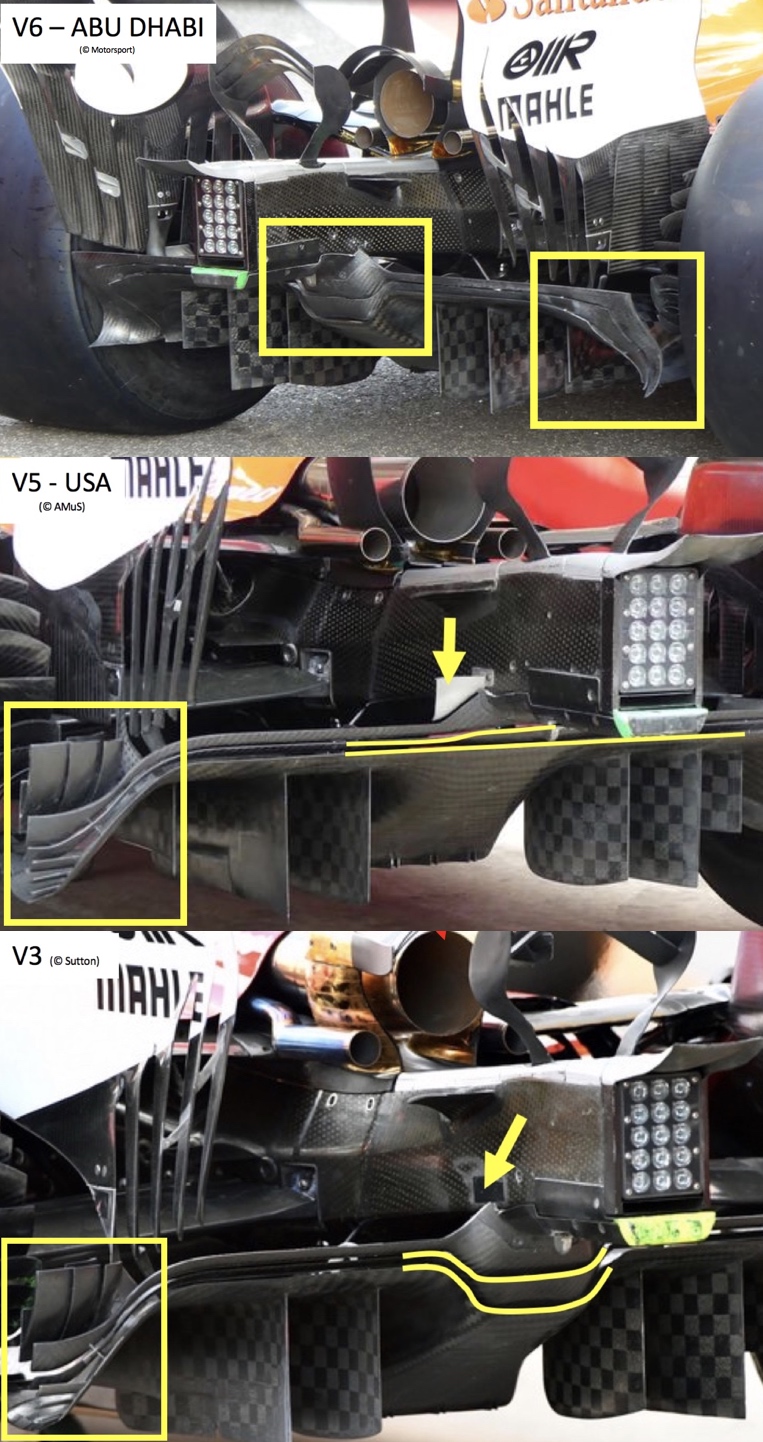 Ferrari continued its evaluation of different diffuser designs in Abu Dhabi, bringing a sixth version of the device, as well as running two previous editions. The new version returns to the v3 U-shaped central section, run by Raikkonen in recent races, whereas, the v5 design uses a flat middle area, and was run by Vettel from the USA onwards.

However, the more interesting feature of the v6 edition is the outer part of the diffuser, where the array of winglets that have been a feature of recent Ferraris has been removed, replaced by a much simpler outer section, with a Red Bull-style gurney flap configuration.

The aim of the diffuser is to suck as much airflow as possible from under the floor, decreasing its pressure and creating downforce across the rear half to the car. However, while it is the most efficient downforce generating device on an F1 car, Ferrari’s old design was quite drag-inducing, with each of the winglets along the outboard section producing a vortex, and hence a reduction in straightline speed.

While this fin array may have helped with the device’s suction effect, the fact that other teams have much simpler designs, and have also achieved good results, suggests that Ferrari’s approach is not necessarily the best one. One of the major improvements to Ferrari’s philosophy for 2017 has been the willingness to look to other teams for inspiration, and this has continued with the v6 diffuser design. The actual size of the diffuser volume has been increased, with the array of fins taking up space previously.

There are two points of note here – firstly, Ferrari’s straightline speed is below that of Mercedes, and secondly, the SF70H’s front wing flap angle has regularly been run very low compared to other teams, especially Mercedes. Simplifying the diffuser for drag benefits should aid the former, while it may also be possible that this new design produces more downforce, which will allow the front wing angle to be simultaneously increased without destabilising the car, raising the overall downforce level. It is certainly no coincidence that Ferrari has been focusing on developing the floor slots ahead of the rear tyre and the diffuser much more than any other team, in a bid to squeeze out some more rear load. 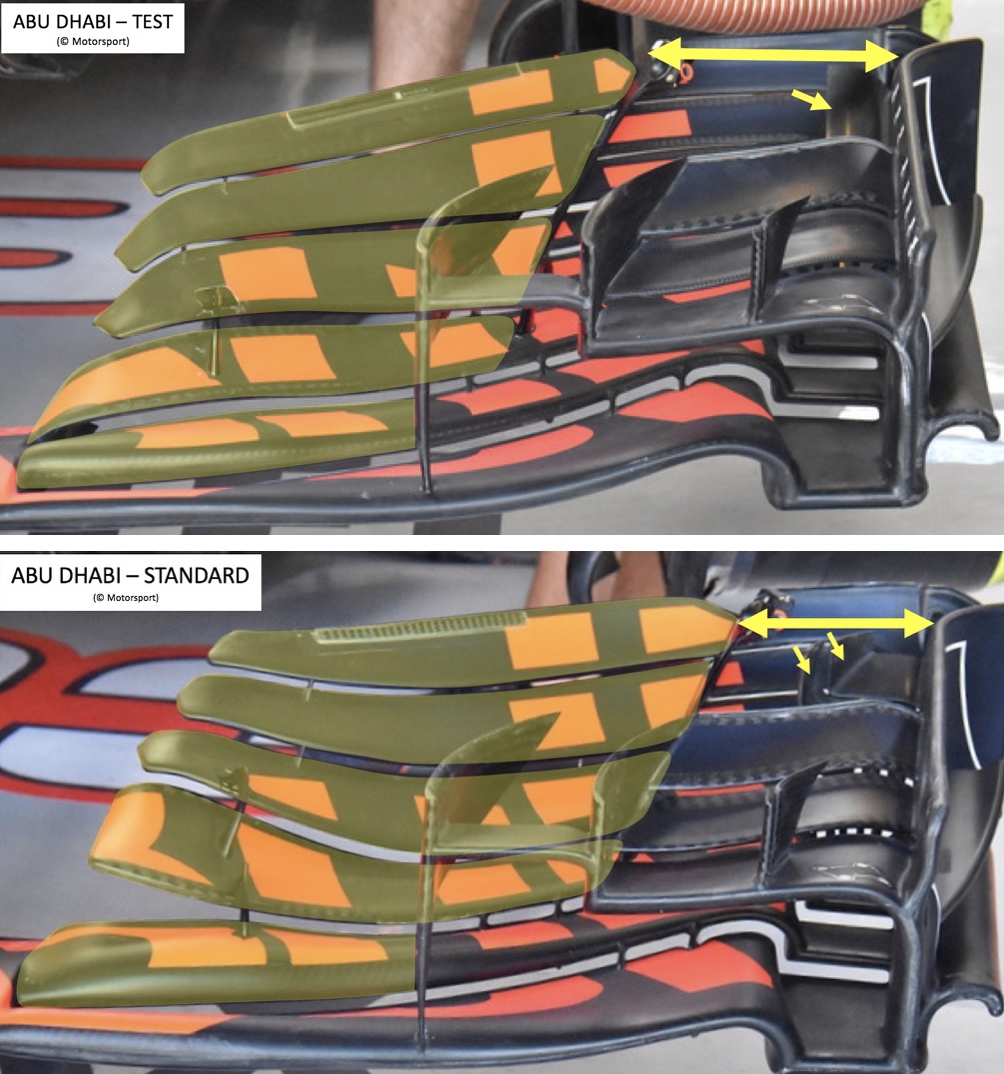 During practice for the Abu Dhabi GP, Red Bull tested a new front wing, sporting a heavily revised flap configuration, together with other developments. The RB13’s front wing has featured, since launch, four upturned flap edges, unlike every other team, whose designs droop down, as has been the convention in recent years. In addition, the flaps on the standard design do not extend right up the the Y250 line, but stop noticeably short of this.

The wing’s flaps are critical parts of the car, as the strength and positioning of the vortices produced at their inboard tips have important implications on bargeboard performance, and the ability of them to divert the front tyre wake as far from the chassis as possible.

The new edition tried in Abu Dhabi is a halfway house between the RB13’s standard design and those of other teams, with a mild droop present on the flaps, while they now also extend further inboard. This will alter the positioning of the vortices shed and how the flaps’ rotating flows roll up into one, then combine with the main Y250 vortex shed where the mainplane meets the FIA-mandated neutral section.

Also note that the orientation of the inboard edges of the flaps is noticeably towards the centre of the car, something that will attempt to move the entire vortex structure shed here a little inboard. Moreover, the furthest forward flap on the old design has now been made part of the mainplane, connecting to the FIA mandated neutral section. This will influence the strength of the initial Y250 vortex.

The width of the flaps has been approximately maintained, despite their extension further inboard than previously, by widening the outer part of the front wing, whose elements sit at a constant angle to the free-stream. While altering the flows under the front wing arch, this will also keep flap deflection under control, ensuring that the front wing carries out its desired function as often as possible,

Lastly, the set-up behind the main cascade has been altered, with the two fin design employed by Red Bull for years being replaced by a longer, single element, much like the designs on other cars. The previous design aimed to direct flow up and around the front tyre (using its upward and outward slope), whereas, the new element just does the former, relying on the vertical fins attached to the cascade elements further forward to do the latter. 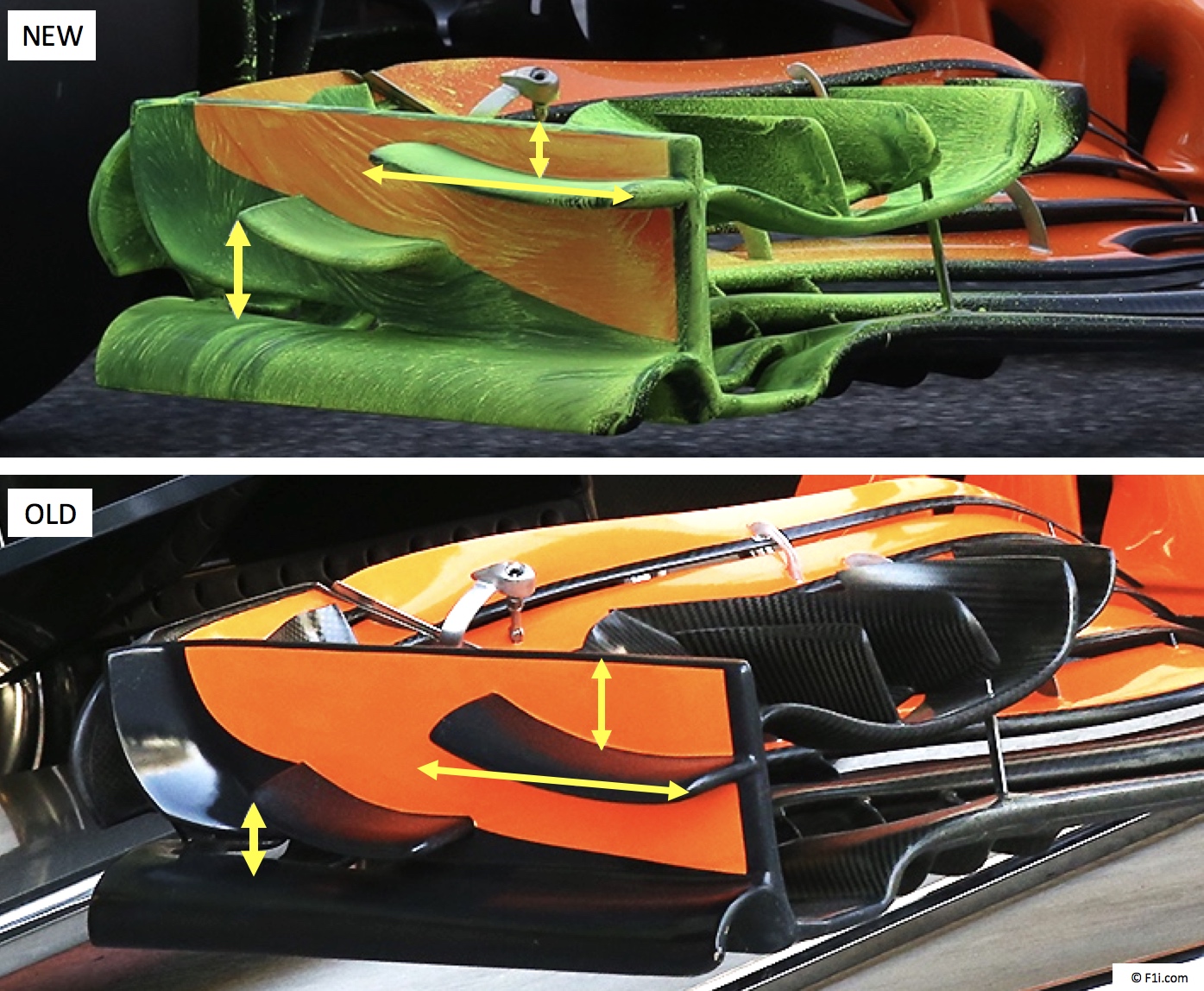 McLaren made significant changes to its front wing’s main section for the USA, but developments to the endplate have been muted since Spain. As such, it was not particularly surprising to see the team test a new endplate canard configuration in Abu Dhabi – it was brought to the track with 2018 in mind.

The forward canard was moved higher up and lengthened, while its camber and angle of attack were reduced. Meanwhile, the lower element was also moved a little higher on the endplate.

The purpose of these canards is to act like wing-shaped sections, not in the sense of producing downforce, but instead, shedding vortices at specific heights to aid the rest of the wing in diverting air around the front tyre. At the same time, producing vortices of unnecessarily high strength will result in a drag penalty, so there is a fine balancing act here.

It appears as if McLaren has prioritised a reduction in drag as its main target for this prototype design. The lower AoA and camber of the top element should reduce the strength of the vortex shed at its tip, while moving this canard further upward will ensure that the initial vortex trajectory will be similar to previously.

The lower canard’s rotating flow will now be higher up to complement the weaker upper vortex. These flows are then collected by the endplate, as well as other outwardly-orientated vortices from the cascade set-up, and help in pulling air around the front tyre for lower tyre turbulence and improved rearward aerodynamic performance.