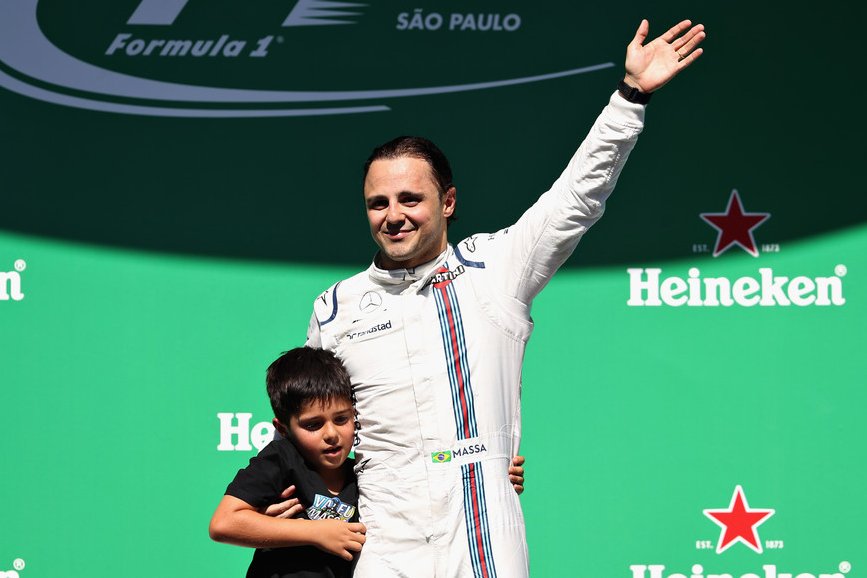 Felipe Massa is set to retire from Formula 1 for the second time at the end of the 2017 season, which will not only mark the end of his long career that began in 2002 but also another record in the sport after 41 years.

The 36-year-old is the last man standing in terms of being at the end of a long list of drivers to have been a teammate of record championship winner Michael Schumacher.

Barring another dramatic comeback by Massa to the sport, after he went back on his initial decision in 2016 following Valtteri Bottas’ move to Mercedes, the 2018 season will be the first since 1976 that will not showcase someone to have partnered the German great.

Meanwhile, Robert Kubica, Paul di Resta and Pascal Wehrlein are all in line to replace the Brazilian, with the former amongst the tipsters’ favourites ahead of teenage Canadian Lance Stroll next at Williams.

Of course, Schumacher only began his career in 1991, but his Benetton teammate two years later in 1993 – Riccardo Patrese – started out much earlier in 1977.

The six-time race winning Italian had also driven the longest of any driver that 1991 season.

Every year since Patrese’s debut has featured a former constructor partner of Schumacher’s, including his first at the Belgian Grand Prix – Andrea de Cesaris – who himself had driven since 1980.

Schumacher had in fact only taken part in that race after replacing then-imprisoned Jordan driver Bertrand Gachot, so the record could’ve been delayed a year as his next teammate that same season was Nelson Piquet, who started out in 1978.

In total, seven-time champion Schumacher, who is currently continuing his recovery after suffering a brain injury following a skiing accident in December 2013, drove for four constructors across 19 seasons from 1991-2006 and then 2010-2012.

It was during his most famous stint with Ferrari that he partnered Massa in 2006 for the whole season, which was actually Schumacher’s last until his brief comeback four years later.

If Massa had arrived a year later or Schumacher retired the season before, the record would have ended in 2016, however, as another Brazilian ex-teammate of his – Rubens Barrichello – was around from 1991-2011 and his only partner with Mercedes from 2010-2012 – Nico Rosberg – started out in 2006 before retiring as champion exactly a decade later.

Thanks for all the support ! Love you guys 😉

If his compatriot Rosberg, who is still only 32 years of age, does ever decide to return to Formula 1, the record will go on, but the run of it being in consecutive years will be broken if he does not come back in 2018.

Despite the record almost certainly coming to an end in 2018, it can still go on in a way through family as Max Verstappen’s father Jos partnered Schumacher for the German’s maiden title-winning season in 1994 for a total of eight races while both were at Benetton.

Although this Schumacher teammates record is a whopping 41 years old, and just eight years after his birth, he partnered just 11 people during his 19 seasons in the sport.

As well as the seven names mentioned above, the German drove with Finland’s JJ Lehto and British trio Martin Brundle, Johnny Herbert and Eddie Irvine over the years too.

Current F1 pundits and presenters Brundle and Herbert, along with Lehto, were at Benetton with Schumacher for various spells, while Northern Irishman Irvine spent four years alongside the all-time great at Ferrari.

Herbert was Schumacher’s teammate for his first two championship wins in 1994 and 1995 (as were Verstappen and Lehto during the former), but Barrichello must have been Schumacher’s luckiest charm having overseen him for each of his five titles in a row from 2000-2004.

Schumacher’s 41-year teammate run may soon be coming to an end, when Massa finally hangs up his helmet after the Abu Dhabi Grand Prix on November 26, but his legacy will, of course, be permanently intact.

Many records remain, including total race and championship wins, which may never be surpassed as he is so far ahead of current chaser Lewis Hamilton.