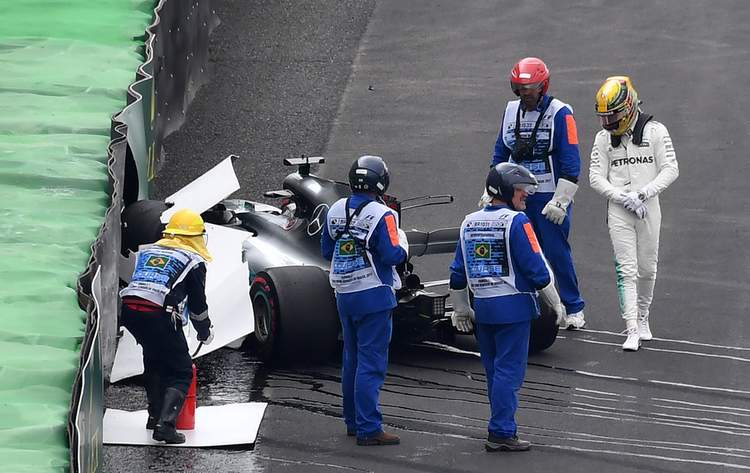 Lewis Hamilton’s first race as a four-times Formula 1 world champion will be from the back of the grid after the Briton dumped his Mercedes into the barriers in Brazilian Grand Prix qualifying on Saturday.

It was his error, and a rare one for Britain’s most successful driver of all time, but at least it came with both titles already won and with plenty of fun still to be had on Sunday.

“Mistakes can happen, Lewis for sure is really upset about himself but things can happen,” said Niki Lauda, the team’s non-executive chairman, after Hamilton crashed without setting a lap time.

The incident left Mercedes, who had started the day dealing with the aftermath of mechanics being held up by armed robbers as they left the track on Friday night, having to seek permission from the stewards for Hamilton to race.

In one of the least surprising pieces of paper ever to emanate from the offices of the governing body, a statement was duly issued that the stewards had accepted the request given that he had set ‘satisfactory times’ in practice.

Hamilton, last year’s winner from pole at Interlagos, had dominated both practice sessions on Friday and had been eyeing his 12th pole position of the season with every chance of a 10th win on Sunday.

Instead, for the first time in 27 races, Hamilton failed to progress beyond the first phase of qualifying.

The last time that happened was in Belgium in August 2016 when he had a 55 place engine-related grid penalty and completed just a handful of laps to qualify.

After fighting back from last to ninth in Mexico, and clinching the title, there is still every chance that Hamilton will add to a streak of points scoring races that currently extends to 23 in a row.

But the embarrassment of sliding into the barriers hard clearly hurt, even if he was quickly on hand to congratulate team mate Valtteri Bottas for securing pole.

Hamilton admitted, “I’m not really sure what happened, it all happened very quickly, but I take full responsibility.”

“It is what it is. Of course it’s unfortunate. Challenges are what makes life interesting and overcoming them makes life meaningful, I guess,” Hamilton told television reporters after returning to the paddock.

”I‘m just going to try to take whatever bubble of negativity comes from that experience and move forwards and try to grow from it. It’s very unusual of me but just shows that we’re all human and things happen.”

“I will try to have as much fun as possible tomorrow,” added Hamilton. “Years ago I came from quite far behind and had a great race.”

Hamilton came from the back row to finish third in Belgium last year, a feat he also performed in Hungary in 2014 when his Mercedes caught fire in qualifying before he had a chance to set a time.

“Lewis has a mountain to climb, but if anybody can, he can,” said team principal Toto Wolff.