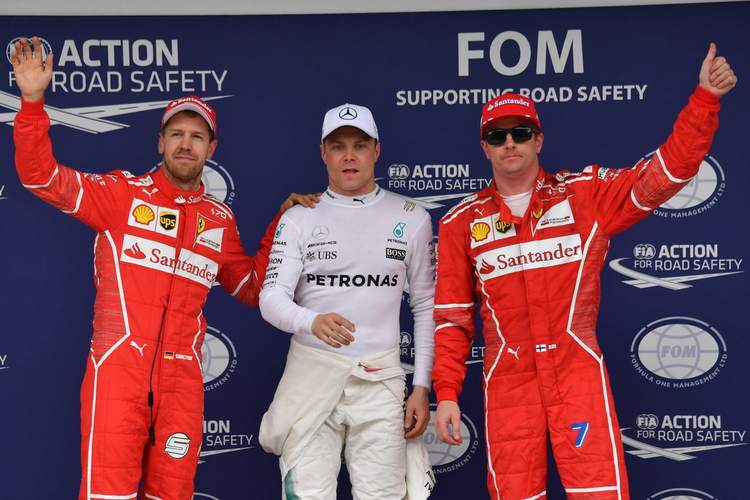 Valtteri, well done, your third pole position, perfect timing for you. How do you feel?
Valtteri Bottas: Yeah, it feels good. Still a bit shaky. It’s a good feeling. It was just a nice lap. It was so close with Sebastian all the way through the qualifying and sometimes with Kimi as well. I got a good lap in the end. Obviously Lewis was out in the beginning, which is a shame for us but I’m happy I could stand up for us as a team.

What happened to Lewis is part of racing, there’s nothing you can do about that but you did a great job today. What a brilliant position for you to start. This is track where it’s not the easiest to overtake and this is a chance for you to control everything tomorrow.
VB: Yeah, it’s really good to start on the pole from here. We have a good car. It’s going to be a close race still with Ferrari, but I’d rather start from the pole, rather than, for example, P3, so looking forward to tomorrow.

Sebastian, today, happy with that performance? I’m sure you would have loved that 51st pole, but it’s a good place to start tomorrow.
Sebastian Vettel: Yeah, it’s alright. It’s not so much about tomorrow but about today. For tomorrow I think it’s fine but I would have loved to be ahead. It was close. I think I chickened out a little bit on the brakes for the final run into Turn 1 and lost a bit too much time. From there the lap was fine. I knew I had a bit left in the last sector, in the last corner, which I got, but by then I was already too much behind.

But overall the car isn’t in bad shape for you. It sounds as if it’s there but it didn’t get it all together?
SV: It was not that bad. I was happy with my first lap. I think it was OK. Three hundredths, you always think there’s some place you could have got that but as I said for tomorrow our long run [pace] looked good, in particular against Valtteri, so let’s see what happens tomorrow.

Kimi, happy for today?
Kimi Raikkonen: So, so. I felt it could have been better but it was a bit tricky sometimes to get the tyres into the right window for the first two corners to be confident under braking. The last run was better but it wasn’t good enough.

It seems to be key today with these cooler conditions. It’s just made it that little bit more difficult. But generally Ferrari are in good shape for the race I would guess?
KR: Yeah, I think we improved the car for today. Obviously the weather can change quickly here, so we have to wait and see what it brings tomorrow. It’s going to be a long race and we’ll do our best.

Valtteri, tomorrow is going to be special because of how close it is and that is really going to be down to how many mistakes you don’t make during the race?
VB: I agree. It’s not such an easy circuit to overtake on, so avoiding mistakes is one thing. The start here is always exciting. It’s going to be a long race. We know São Paulo, plenty of things can happen. I’m looking forward and again thanks to all the people for their mega support.

Valtteri, congratulations, your third career pole position, your first here in Brazil and a new track record, 2.4 seconds inside the 2016 pole. A perfect final lap. You had some work to do, obviously, after the first run and a great effort, I guess, in your mind, after a tough month for you. You’ve bounced back in the strongest possible way, particularly on a day when Mercedes needed you to stand up with what happened with Lewis.
VB: Thank you. Yeah, of course very happy with the qualifying from my side and also from us as a team. Except the unfortunate off Lewis had in the beginning. It was then in the end only me. Happy I could deliver and happy I could put it on pole. So, yeah, the laps were getting better and better really, like with every one and it was, all the time, very close, so I’m pleased that in the end in Q3, I got a good lap and it was enough for pole. So, very pleased.

It’s always fine margins here Sebastian, you were fastest in the first run in Q3 but couldn’t improve. Unusual for you to leave the door open for a rival. What happened?
SV: Well, I was very happy with the first lap, so yeah, I knew that in the last corner, in that first attempt in Q3, I had a little bit left because I lost the rear a bit, so I wanted to get there about the same and then I knew I could gain some time but yeah, I chickened out a little bit too early in the first corner, braking a bit too early, the grip was there, so I lost some time compared to the first run. Then I managed to stay there and got what I thought I will back in the last corner – but it wasn’t enough to come back. So, yeah, not ideal but overall I think a very positive day for us – both of us, I believe, looking at the gaps yesterday and today, so, very happy.

And Kimi, two of you versus one Mercedes. Unusual situation, from a strategy point of view that gives you plenty to play with, ‘cos he can’t cover both of you. Thoughts about that and also your performance today.
KR: Obviously, we’ll see that tomorrow, what it will bring but today was a better day than yesterday, for sure. The feeling was pretty good on some laps but it was a bit tricky to have full confidence in the first corner to be sure that the tyres will work well and you don’t lock the wheel. That was really the most difficult. Some sets seemed to be more easy than others and the last set actually I had more grip than I expected. But yeah, not ideal but not too bad. I think the car is very good, position, the handling, so tomorrow is a race and it should be OK.

Valtteri, you have been facing some difficulties in the last few races, especially in qualifying conditions, and here since the first day you are very fast. What is it? The circuit? The characteristics of the car and the circuit? Self-confidence?
VB: Well, for sure, sometimes it’s been more difficult, sometimes better – and that’s how it goes in racing – but I think the line, the graph for me has been all the time on the up and been feeling better and better with the car and just working hard on the issues we’ve been having, I’ve been having. Learning lots and, again, feeling better and just managed to learn from the mistakes and from the tricky sessions. Last few weekends has been a lot better, like last race in qualifying it was about hundredths between me and Lewis and it’s been the case all weekend here, so yeah, obviously, a shame he wasn’t any more in Q2 and Q3 but still I’m very, very pleased with the performance.

Sebastian, bit of a slow start yesterday, then really close today. What can we expect from tomorrow’s race, especially with Lewis obviously not in the race for victory?
SV: Don’t think it makes a difference. Obviously Valtteri’s on pole; it will be difficult to beat him but I’m confident we have the pace, especially on the long runs. I think it’s more of a surprise today that we got that close. If it’s that close, you obviously wish to be ahead but tomorrow should be a good race. We will see what happens. Interlagos is always special, there’s always something that happens in the race so let’s stay out of trouble and have a good race.

To Sebastian and Kimi: the weather forecast for tomorrow is a sunny day and 28 degrees, a lot hotter than today. This is good for Ferrari? Are the race times more competitive than in qualifying?
SV: I think it’s OK, I think it’s like yesterday. I think we improved the car for today. Obviously it always feels a bit better when it’s colder but it should be fine. Usually in the race we are quite strong. If it’s hot, I don’t think it hurts us but then again today it was forecast wet, it wasn’t, so who knows? Maybe it changes tomorrow.

A similar question to Valtteri: do you think the tyre strategy will be pretty straightforward tomorrow, given it’s dry and hot?
VB: I do think there’s not that many ideal strategies, so I think it can be quite straightforward but like Sebastian said, many times it’s been a really interesting race here with plenty of things happening so who knows? We are not too worried about the hotter temperatures, because I don’t think it’s actually going to be that far from yesterday – maybe a bit hotter than P2 – but everything still seemed to feel OK for us and we didn’t go crazy with the set-up for qualifying so we still kept an eye on the race but obviously tomorrow we’ll find out if we have the quickest car or not.

Question for everyone: the new system with the blue flags that will appear on the cockpit of the driver that is receiving the blue flags, do you think this will work out tomorrow, the first time here in Sao Paulo?
VB: Well, first of all it’s been a long time that we get a blue flag in the cockpit, the lights, I think.
SV: Not for you.
VB: But the boards yeah, first time, so obviously when there’s a train of cars, then it’s maybe more precise, showing who needs to back off but it should be good.

Hamilton is already World Champion but the second place in the championship is open. Does it stimulate you even more to keep your second position, Sebastian? And you, Valtteri, does it give you more stimulation to be second in the World Championship?
SV: Look, obviously, we were on target to win; obviously that’s not any more in reach so the maximum stimulation we can get is to finish second so that’s what we try to do. If we don’t manage to do that then we’ve failed, so we’ve failed once this year already, I don’t want to fail again. The motivation is very high to make sure we stay ahead and we beat Valtteri tomorrow and in Abu Dhabi.
VB: Yeah, same for us. It’s always good to have a target, makes you work harder and try harder so our target is to try and still get second place in the championship. It is possible but obviously he’s leading by 15 points so we really need to have a strong race here and also in Abu Dhabi.

Valtteri, was pole something like a kind of a gift to those crew members who had the incident yesterday in the night?
VB: Well, I spoke with them this morning and I said we are going to put it on pole and it’s going to cheer everyone so I’m glad it happened actually. Obviously first of all, very happy that everyone is in one piece and nothing happened physically to anyone but obviously pretty bad situation to be in but yeah, just happy everyone is still here.