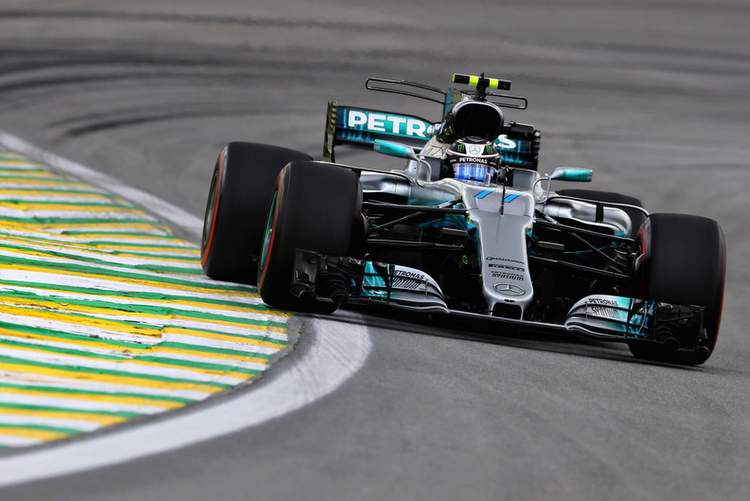 Mercedes driver Valtteri Bottas took pole position at the Brazilian Grand Prix while team mate and newly-crowned four-times Formula 1 world champion Lewis Hamilton will start at the back after crashing out in Q1.

Ferrari’s Sebastian Vettel will join the Finn, who is 15 points behind him in the championship, on the front row with his teammate Kimi Raikkonen third and Red Bull’s Max Verstappen fourth.

The pole was the third of Bottas’s career and he did it with a track record time of one minute 08.322 seconds at a damp Interlagos.

“It feels good. It was so close with Seb all through qualifying,” said the Finn, who was 0.038 quicker than Vettel. “It’s a shame Lewis went out but I’m happy I could do a good job for the team.”

Hamilton, who clinched his fourth world championship in Mexico two weeks ago, had been hoping for a 12th pole of the season but spun into the barrier at turn seven in the opening session before he could set a lap time.

Vettel had been on provisional pole until Bottas produced his late burst of speed and the German looked forward to a good scrap on Sunday.

“For tomorrow I think it’s fine. I think I chickened out a bit on the brakes into Turn One on the final run,” he said. “But our long run looked good compared to Valtteri so I am feeling good for tomorrow.”

Hamilton’s was a rare mistake by Britain’s most successful racing driver, and last year’s winner from pole at Interlagos, and he will now have to fight through from the back for the second race in a row.

The Mercedes driver won the title by finishing ninth in Mexico after a first lap collision with Vettel sent both to the back of the field.

His mechanics will have work to do, with the impact causing damage to the left side of the Mercedes and ripping off the front wheel and suspension.

Hamilton, unhurt and smiling somewhat unconvincingly as he spoke to reporters later, said it had all happened really quickly.

“It is what it is. Of course it’s unfortunate. Challenges are what makes life interesting and overcoming them makes life meaningful, I guess,” said the 32-year-old.

“I’m just going to try to take whatever bubble of negativity comes from that experience and move forwards and try to grow from it. It’s very unusual of me but just shows that we’re all human and things happen.

“I will try to have as much fun as possible tomorrow,” added Hamilton. “Years ago I came from quite far behind and had a great race.”

Australian Daniel Ricciardo qualified fifth fastest for Red Bull but has a 10 place grid penalty as a result of power unit changes.

Brazilian Felipe Massa, preparing for a home farewell in the penultimate race of his last season in Formula One, will start ninth.

Hamilton, who had taken to the track early in a bid to put in a solid time in case of rain, lost control as he exited Turn 6. The back end of his car stepped out and he slid off into the tyre barriers, wrecking the front right side of his Mercedes.

The crash resulted in a brief red flag period as Hamilton’s car was cleared. When the action resumed Mercedes team-mate Bottas quickly jumped to the top of the timesheet with a lap of 1:10.053.

He was soon eclipsed by Verstappen and then by Vettel, with the Ferrari driver posting a time of 1:09.796. Bottas responded with a time of 1:09.452 but he was then pipped by Räikkönen in the second Ferrari with a lap of 1:09.405.

At the bottom of the timesheet, Hartley was the driver to profit from Hamilton’s exit. With the Briton rooted to the bottom of the timesheet by his crash, there would be just four further eliminations and with a lap of 1:10.625 Hartley managed to take P15, five hundredths of a second ahead of Wehrlein. The Sauber driver was eliminated ahead of Gasly, the Williams of Stroll, the second Sauber of Ericsson and Hamilton.

Stroll had suffered a mechanical issue in FP3 and was late to the fray in Q1 but the Canadian failed to land a good time with his final flyer. Team-mate Massa, meanwhile began his final qualifying session in front of his home crowd with an excellent lap of 1:09.789 that earned fourth place in the segment behind Räikkönen, Bottas and Vettel.

Bottas set the pace early in Q2 with a lap of 1:08.901 that left him just over a tenth of a second clear of Vettel and a further tenth up on Räikkönen. The Red Bull pairing of Verstappen and Ricciardo slotted into fourth and fifth places respectively.

Unusually for Q2, which often sees the frontrunners remain in their garages in for the final runs, the top five drivers returned to the track in the final stages of the segment and it was Vettel who found the most time. The German took top spot with a time of 1:08.494, 0.144 ahead of Bottas. Verstappen went through in third place, fourth tenths behind Bottas, with Räikkönen fourth ahead of Ricciardo.

In the drop zone as the final runs began were Grosjean in 11th, followed by Vandoorne, Hulkenberg, the second of Magnussen and Hartley.

Hulkenberg was the man to profit, the Renault driver jumping to eighth place by the time session ended. As other times flooded in, it meant that Ocon was the man to lose out, the French driver being eliminated in P1 ahead of Grosjean, Vandoorne, Magnussen and Hartley.

Vettel again set the pace in the final Q3 session. Bottas was first on track and set a time of 1:08.442 but Vettel bypassed it by eight hundredths of a second to claim top spot. Räikkönen was third, while Verstappen claimed fourth with his first run just under three tenths of a second ahead of team-mate Ricciardo.

But it was Bottas who made the most of the final runs. As drops of rain began to fall across Interlagos, Vettel failed to find an improvement on his last lap, the German saying that he had not done his best work in the first sector and lost most time there. That opened the door for Bottas and the Finn barged through to claim his third career pole position with a lap of 1:08.322, 0.038s ahead of his Ferrari rival.

Räikkönen took third in the second Ferrari with a time of 1:08.538 and Verstappen improved to be the only other driver inside the 79 seconds mark. Ricciardo finished fifth but is set for a grid penalty for the race, while Perez was sixth. Alonso put in a good performance to claim seventh place ahead of Hulkenberg, Sainz and Massa. 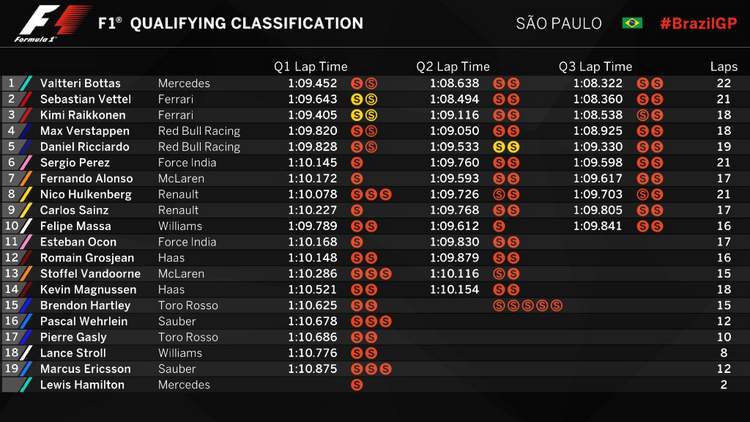