Flashback: Senna’s other triumph at Interlagos 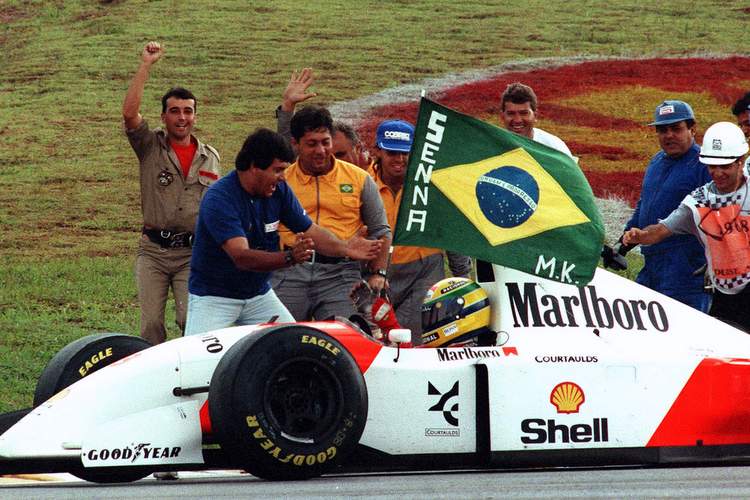 When discussing the remarkable career of Ayrton Senna, few races (if any) get more acclaim than his first home victory at the 1991 Brazilian Grand Prix.

Finishing the race with only sixth gear, it was a performance that captured the very essence of what made him special and yet, it wasn’t the only time he performed miracles at Interlagos. Two years later, he managed to do it again.

Despite being only the second race of the 1993 season, Senna came to Brazil already in a difficult position. After a dominant season in 1992, Williams-Renault showed up to the first race at Kyalami having fully retained their magic, although with 1992 Driver’s Champion Nigel Mansell now racing in CART, it was Senna’s archrival Alain Prost who was poised to dominate, and indeed he would go on to take seven of the first ten races.

In contrast, Senna found himself as far away from championship contention as he had been in a long time. McLaren had had a poor season in 1992, and matters were only made worse over the winter when engine-suppliers Honda pulled out of the sport.

In their place, McLaren had only been able to secure a customer-supply from Ford, which was simply not up to the standard of its competitors. Still, his talent was undeniable, and he proved that with a P2 in South Africa, remaining the only car Prost didn’t manage to lap.

Come Brazil it didn’t seem like Senna would manage any better, and indeed he was trounced in qualifying, managing only P3 to Prost’s pole, 1.831s down on the Frenchman. Sandwiched between them was Prost’s teammate Damon Hill, who could only get within 0.993s of the then-three-time world champion.

Providing an exciting start for the Sao Paulo faithful, both Senna and teammate Michael Andretti made waves at the start, the former jumping Hill for P2, the latter colliding heavily with Ferrari’s Gerhard Berger. However, out front Prost got away comfortably, and looked for all the world like he would once again romp to victory.

Indeed, the odds of a Prost win only increased in the race’s early stages, with Senna relinquishing his position to Hill on lap 11, before losing another place to Benetton’s Michael Schumacher due to a 10-second stop-go penalty for passing a backmarker under yellow flags. By lap 25 Williams seemed headed for a 1-2 – but then the heavens opened, and the local hero was once again given a chance.

Pitting immediately for wet tyres, Senna was now racing under conditions that considerably evened the playing field, which was only helped by further intervention from Lady Luck. Changing for wets himself, Schumacher was delayed considerably when his car fell off its jack, while Prost stayed out after mishearing his team radio, and ended-up aquaplaning into the already-deposited wreckage of Christian Fittipaldi’s Minardi.

Hill now in the lead, his own advantage was nullified by the deployment of the safety car – the first (official) time in F1 history – as Marshalls needed to clear up not just Prost and Fittipaldi’s wreck, but the aftermath of Footwork’s Azuri Suzuki collision with Ukyo Katayama’s Tyrell on the pit straight. Forced to try and build another gap over Senna, Hill’s efforts were spoiled when the rain eased off, as Senna made the switch back to slicks a lap before Hill did, and was able to retake the lead with a daring pass on the still-damp track on lap 42.

Even with a clear track out in front of him, the expectation was Hill would quickly adjust and commence his own fightback, making use of every advantage the Williams FW15C had. Yet on that day Hill had no answer for the Brazilian, as Senna was able to bang-in unassailable lap times with the fury that was his trademark. By the time Senna had completed the 71-lap race distance, he led Hill by 16.625s, Schumacher third, an additional 30 seconds back.

Once again able to send the Brazilian fans into ecstasy, it was one final gift from Senna to the home faithful before his tragic passing a year later. Already considered among the pantheon of F1 greats, it was a race that only bolstered his credentials, and fittingly, none other than Juan Manuel Fangio was there to embrace him on the podium.

It’s a testament to how astonishing his career was that it’s considered his ‘other’ Brazilian GP victory, but such was the way of Senna – a man who made a routine of the miraculous.