Lewis Hamilton won his fourth Formula 1 World Championship title when he finished ninth in the Mexican Grand Prix, here is an overview of the Mercedes driver’s road to the 2017 championship triumph: 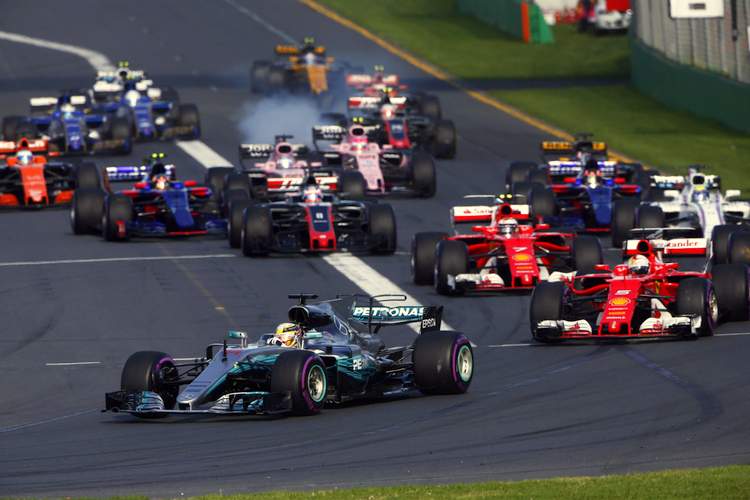 Australia, March 26
Hamilton started the season from pole position after a record lap time in qualifying but Sebastian Vettel put his Ferrari alongside on the front row. Vettel won by 9.9 seconds, his 43rd victory in Formula One, with Hamilton second.
Vettel 25 points, Hamilton 18 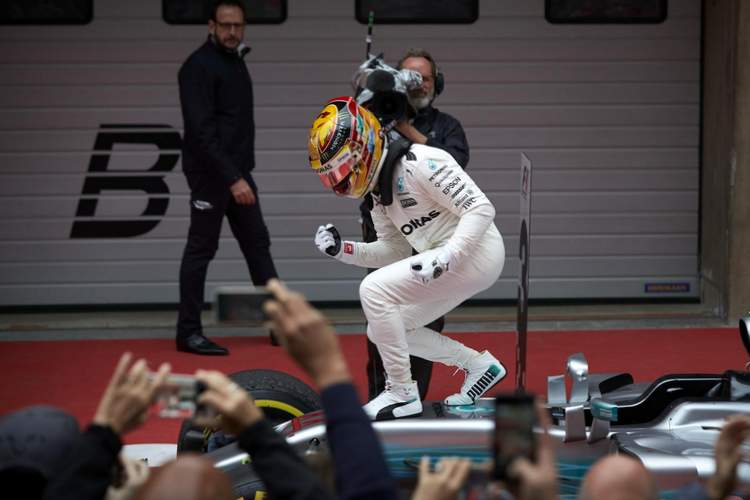 China, April 9
Hamilton took pole position, again with the fastest ever lap of the circuit, and went on to win the race. Vettel qualified second and finished second, 6.2 seconds behind. The win was Hamilton’s fifth in Shanghai. The pair were tied on points.
Hamilton 43, Vettel 43 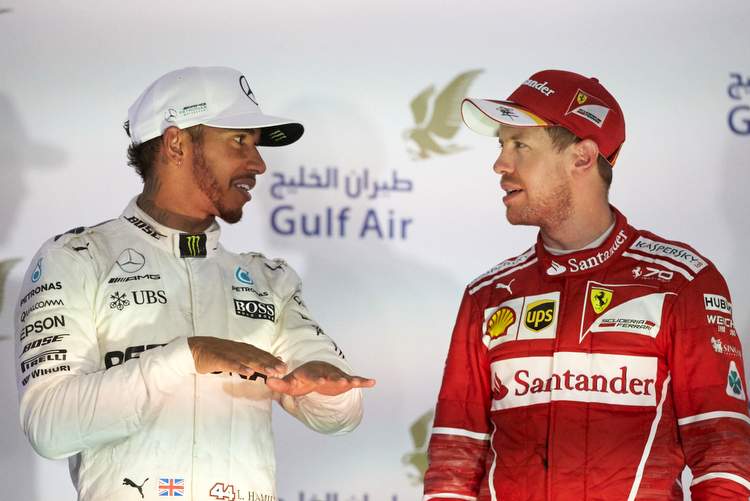 Finland’s Valtteri Bottas ended team mate Hamilton’s run of six poles in a row with his first. Hamilton qualified alongside while Vettel was third. The German turned the tables in the race by winning, with Hamilton second and 6.6 seconds behind.
Vettel 68, Hamilton 61 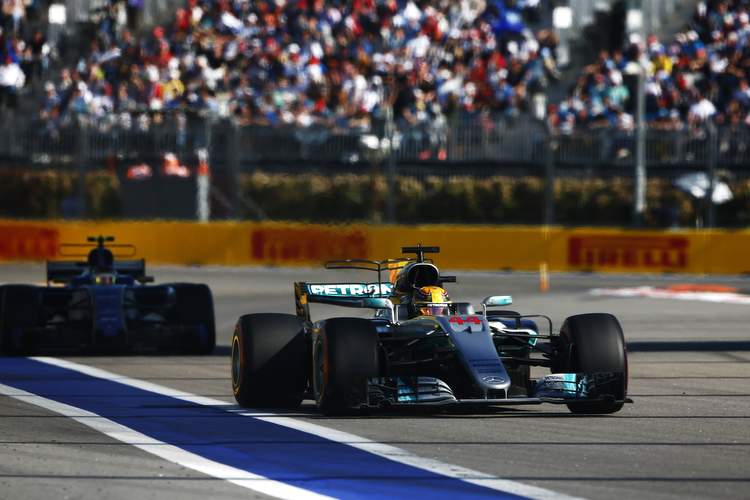 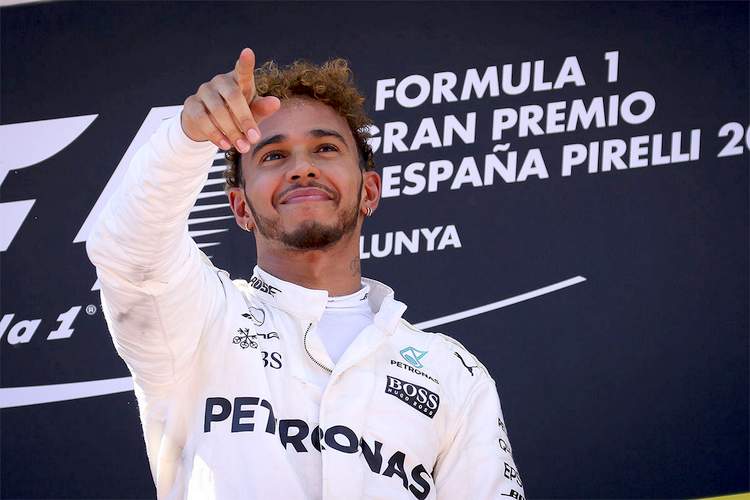 Spain, May 14
Hamilton was back on pole, the 250th by a British driver in Formula One, with Vettel alongside on the front row. The order remained the same in the race, with Hamilton taking the chequered flag 3.4 seconds clear.
Vettel 104, Hamilton 98 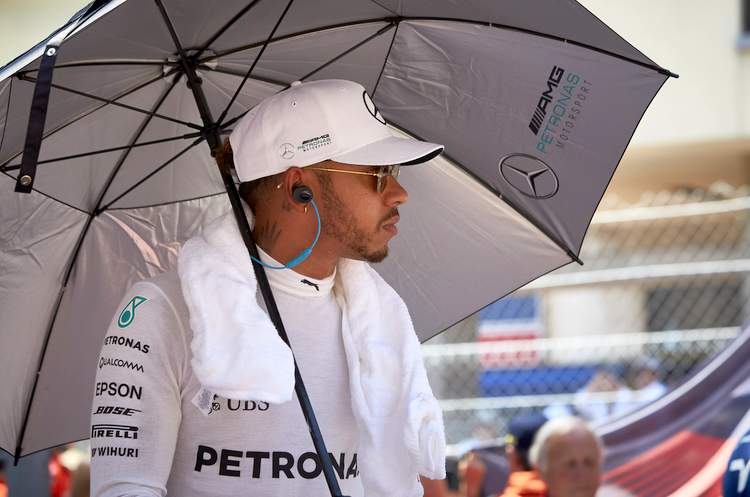 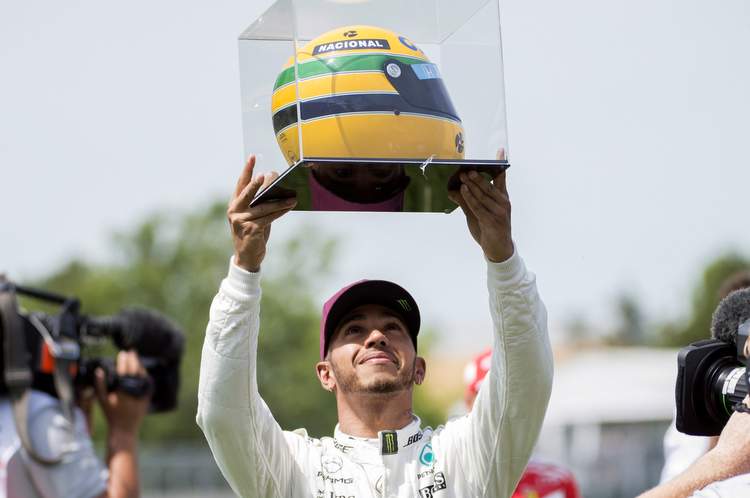 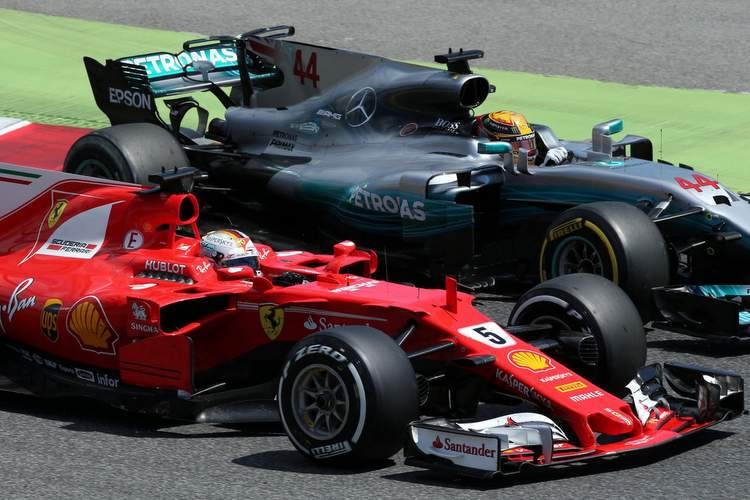 Azerbaijan, June 25
Hamilton took pole with Bottas completing a Mercedes front row. Vettel lined up fourth. The German hit the back of the Briton’s Mercedes during the race while behind the safety car and Daniel Ricciardo won for Red Bull. Vettel finished fourth and Hamilton, who had to pit to fix a loose headrest, fifth.
Vettel 153, Hamilton 139 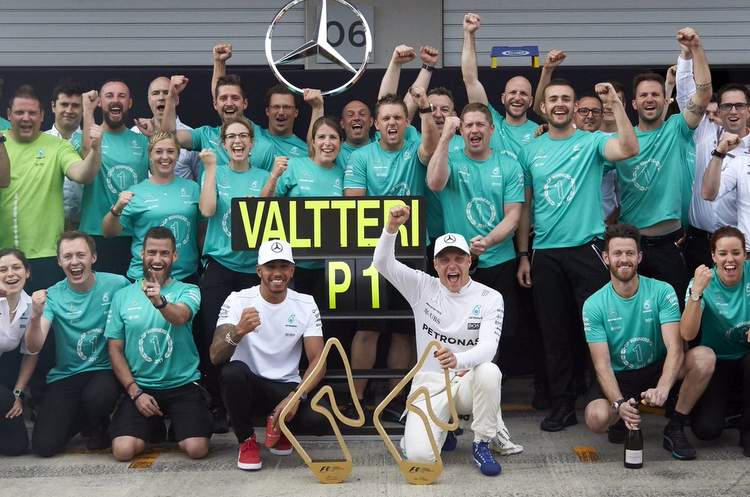 Austria, July 9
Bottas took pole position, with Vettel alongside, after Hamilton collected a five-place grid penalty for a gearbox change and started eighth. The Finn then held off Vettel to win, with Hamilton fourth.
Vettel 171, Hamilton 151 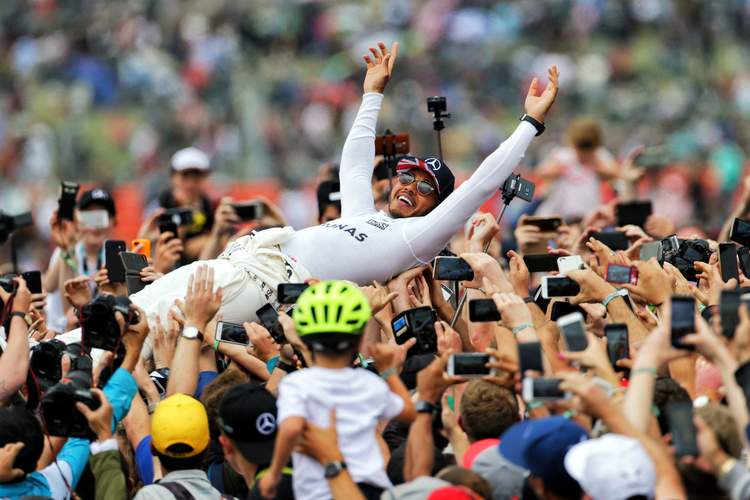 Britain, July 16
Hamilton was back on pole at home, with Vettel qualifying third. The Briton went on to win while a late puncture slashed Vettel’s lead to one point. The German finished seventh.
Vettel 177, Hamilton 176 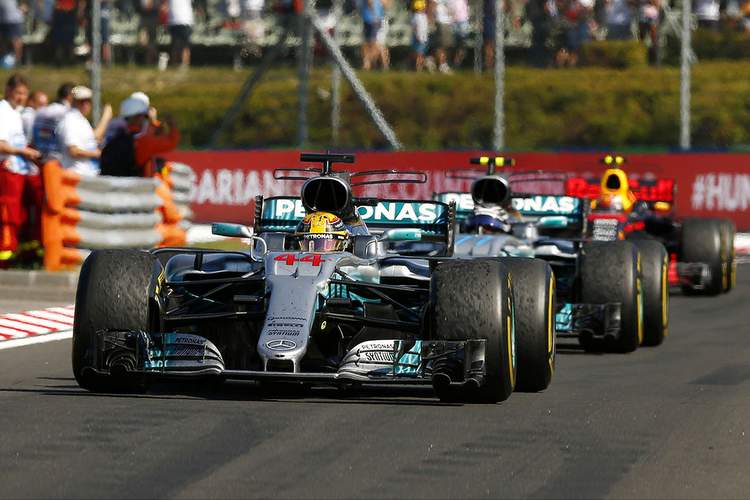 Hungary, July 30
Vettel took pole on an all-Ferrari front row with Hamilton fourth. The German won while the Mercedes driver sportingly gave third place back to Bottas after the Finn let him past earlier.
Vettel 202, Hamilton 188 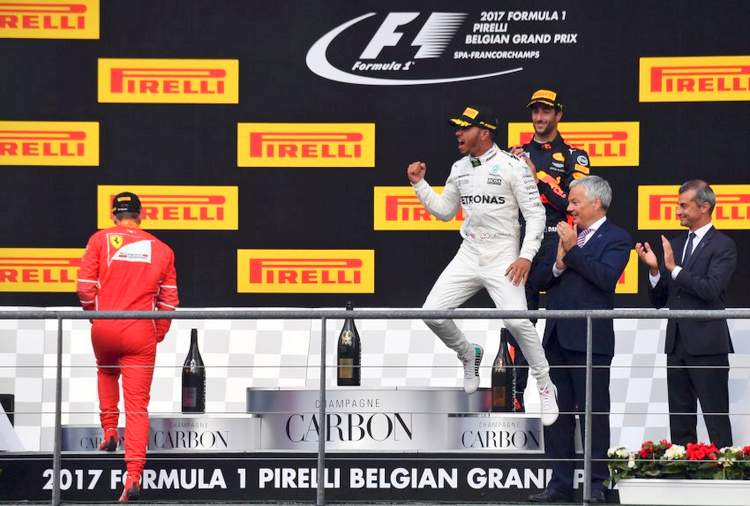 Belgium, Aug. 27
Hamilton returned from the August break to equal Michael Schumacher’s all-time record of 68 pole positions in his 200th race. He went on to win with Vettel second.
Vettel 220, Hamilton 213 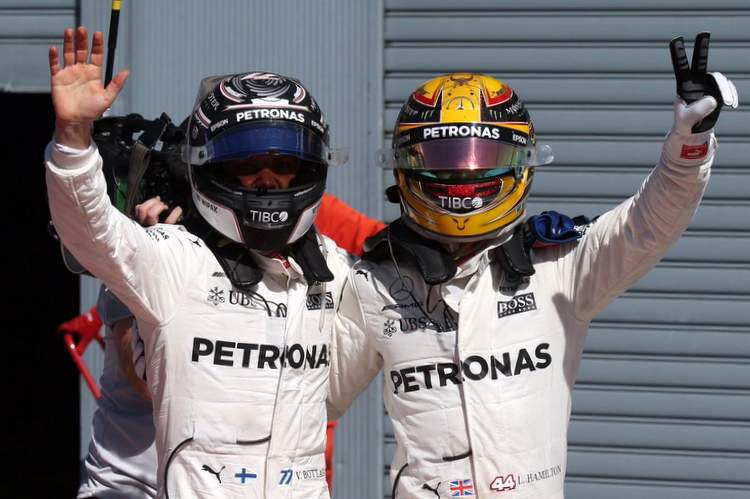 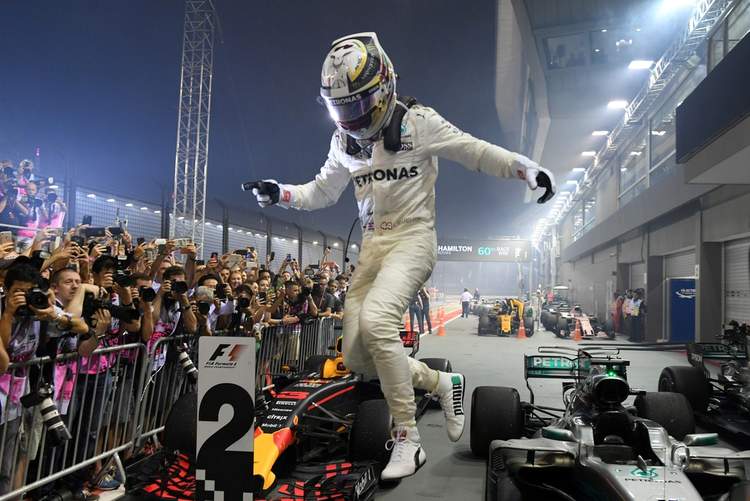 Singapore, Sept 17
Vettel started on pole but the two Ferraris collided at the start in a battle with Red Bull’s Max Verstappen. Hamilton came through from fifth to win.
Hamilton 263, Vettel 235 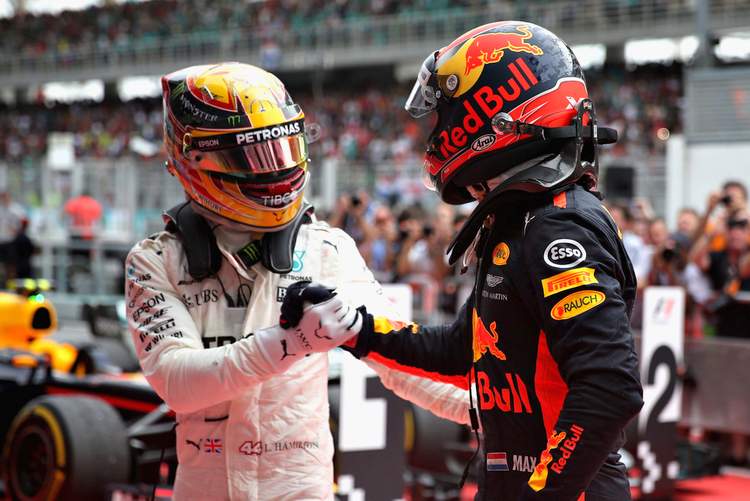 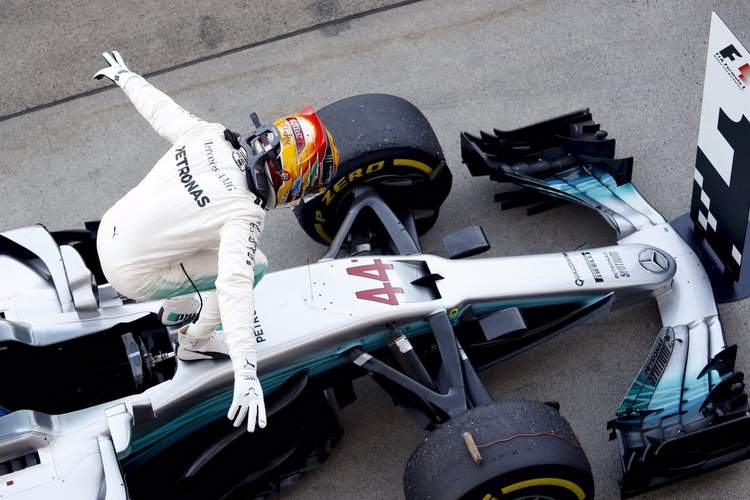 Japan, Oct 8
Hamilton took another pole and went on to win while Vettel retired after four laps with a spark plug problem that surfaced before the start.
Hamilton 306, Vettel 247 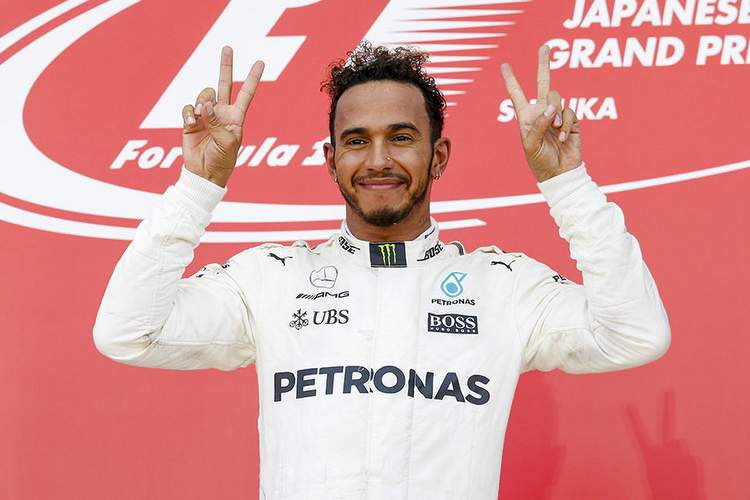 United States, Oct 22
Hamilton started on pole, with Vettel second and the race ended that way. Mercedes secured the constructors’s title for the fourth year in a row.
Hamilton 331, Vettel 265 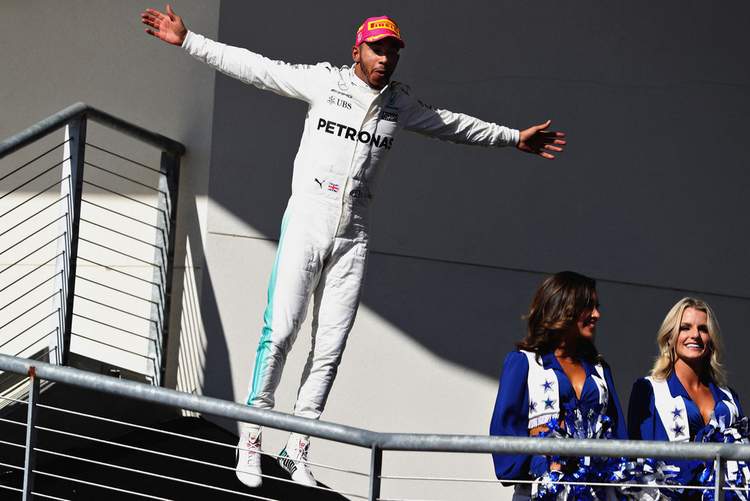 Mexico, Oct 29
Vettel took pole, with Hamilton qualifying third but needing only a fifth place to take the title. A first corner collision between Hamilton and Vettel dropped both to the back of the field. Hamilton fought back from last place to finish ninth, while Vettel climbed from 19th to fourth. Red Bull’s Max Verstappen won the race. Hamilton secures fourth world championship.
Hamilton 333, Vettel 277 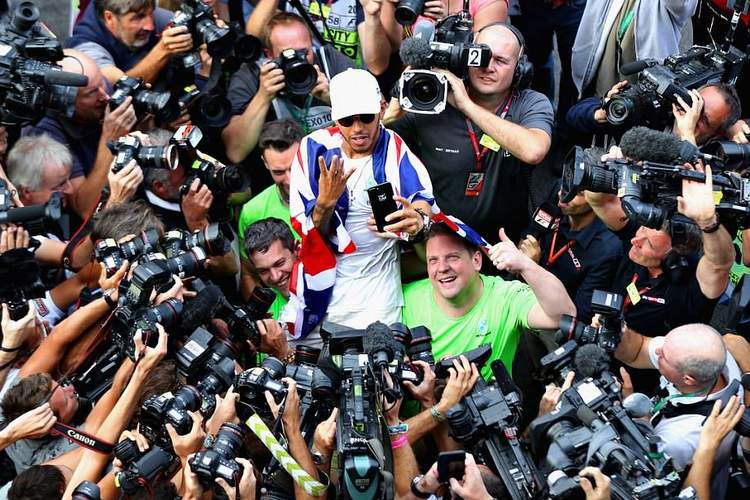