Leclerc: Winning F2 shows that I am ready for F1 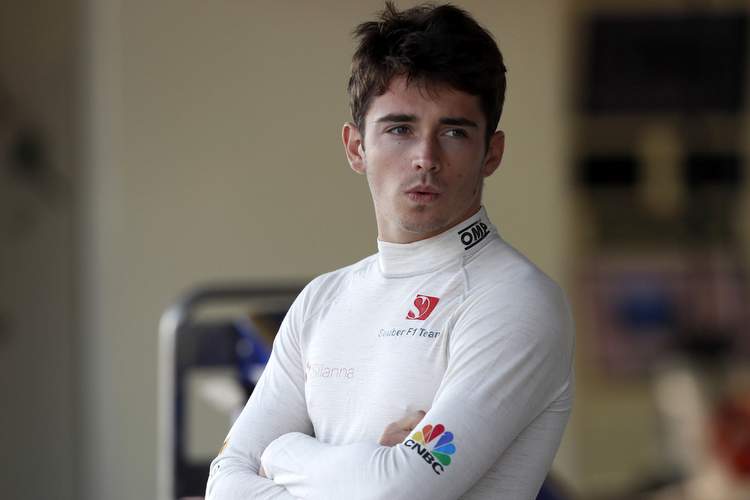 Charles Leclerc can remember, as a three-year-old, playing with a Formula 1 toy car on the balcony of a friend’s Monaco apartment as the drivers in their cars roared past below.

“I fell in love with it straight away,” he told Reuters in an interview.

The 20-year-old Monegasque also recalls being towed around a go-kart track a year and a half later by Philippe Bianchi, father of the late French driver Jules, and being even more smitten.

Leclerc is now on the brink of the big time, the Formula Two champion and Ferrari protege widely expected to race for the Swiss Sauber team next season.

It will be an emotional moment when it happens and he will not be alone. Two racing families, united in grief and pride, will be joined by a multitude of well-wishers backing him all the way.

Bianchi, another shining star of the Ferrari academy, died in 2015 a year after suffering severe head injuries during a crash at the Japanese Grand Prix while racing for tail-enders Marussia.

And then, in June this year, Leclerc’s father Herve – who had been a constant presence throughout his racing career – passed away. Every race since then has been with both men in mind, Leclerc drawing strength from their memory to overcome all obstacles.

“I was racing for Jules and now obviously, since half of this year, my father. These are the two persons that sometimes in the hard times you think to them and it gives you extra power,” he said. ”I definitely use it as a strength for my career.

“My father was my number one fan and every time I won a race he was the happiest father of all. I just want to do well for them to watch from up there and be proud of me.”

The Bianchis and Leclercs go back decades, Philippe and Herve best friends from boyhood and their sons’ futures intertwined.

Jules was Leclerc’s godfather, his older brother’s best friend and a source of constant advice and assistance as he set off up the racing ladder.

Philippe Bianchi’s kart track in Brignoles, between Marseille and Nice, was where the families spent their weekends.

Leclerc first sat in a kart after telling his father he was not well enough to go to school and being taken to the track instead.

“I did my first laps there behind Jules’ father with a rope attached to my go-kart just to know if I could steer and brake,” recalled the driver. “On the way back… I told my father that was the job I wanted to do when I was older.”

Herve’s death came three days before the Azerbaijan Grand Prix, with Leclerc competing for Prema Racing in the Formula 2 race in Baku.

He remembers the weekend as something of a blur, the worst in terms of mental preparation, but spectators saw an astonishing performance.

“Obviously I had my head completely somewhere else… it was hard for me to focus on racing at that moment. We did a first free practice and it didn’t go well,” he said.

“After free practice I just asked myself what my father wanted me to do. The answer came very quickly to my mind that he wanted me to win and to do my best. That’s what I did.”

Leclerc qualified on pole position and won both races with the fastest lap, even if a time penalty in the latter one demoted him to second.

He won the Formula 2 championship with three races remaining and took part in Friday practice with Ferrari-powered Sauber at the Malaysian, United States and Mexican Grands Prix.

The brightest Monaco-born prospect since local great Louis Chiron, who retired in the 1950s and has a harbourside statue in his honour, Leclerc has also tested for Ferrari.

“When you have won Formula 2 I don’t think you can do anything more than that to show you are ready for Formula 1. So I hope to get the chance now,” he said.

”If I go eight years back in time, the mental side was probably a weak thing that I had. Now it has probably become my strongest point.”

“That has definitely helped me also to go through all the hard moments in the last two years. I think the last two tragic accidents from my side have helped me to become more mature and to grow as a person,” added Leclerc.