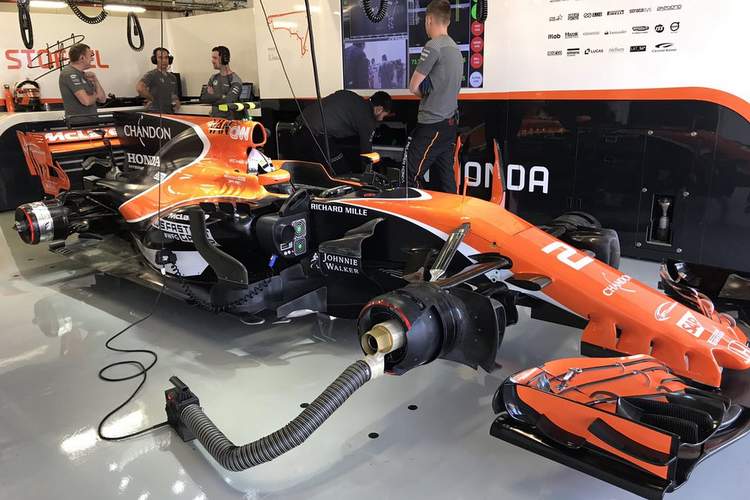 A look at technical developments from Sunday’s Mexican Grand Prix and the United States Grand Prix a week earlier.

Ferrari continued its aggressive 2017 development programme in Austin, bringing updates to multiple areas of its SF70H. These changes will not have been in response to poor recent results, but rather part of a scheduled upgrade package – it is also useful to test new ideas and concepts, given the regulatory similarity for 2018. The development we will focus on here is the floor slots in front of the rear tyre, which were revised for the fifth time this season, and their effect on diffuser performance.

The wider tyres for 2017 have made controlling the wheel wake more difficult than in previous years, and with the larger, higher downforce diffusers as well, the importance of clean flow around the rear of the car has never been more critical to performance.

This is why Ferrari has been optimising this area of the car at every opportunity, although it is interesting to note that Mercedes, barring a very minor change, has kept the same version of floor ahead of the rear tyre throughout the year.

While the rearmost slot is unchanged, Ferrari has altered the remainder, reducing their number by one to four, while also directing them further inboard, with a greater angle relative to the edge of the floor. As high pressure above the floor spills over to its underside, a series of vortices are produced parallel to the slots. 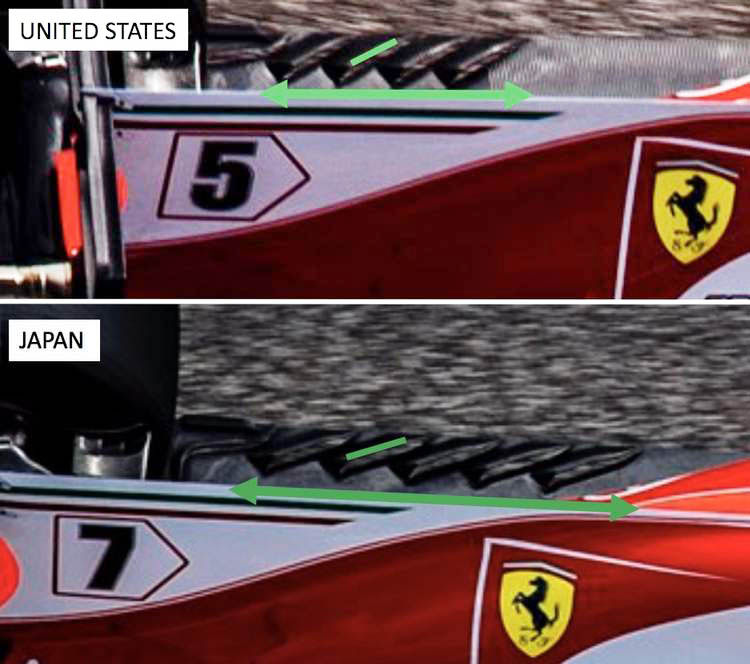 These are directed just inside the rear tyre, and as energetic flows, they will draw air into them which would otherwise collide with the wheels, while also sealing the diffuser from turbulent air emanating from the tyre. In this way, they reduce the extent and impact of ‘tyre squirt’.

The new design on the Ferrari will be looking to optimise the positioning of the vortices to minimise this issue, while also not being overly penal in terms of drag, since each of the rotating flows shed has resistance associated with it (vortex/induced drag).

In addition, the diffuser itself has been developed significantly, with a much more aggressive central section. A move in this direction was tested in Hungary, post-race, but subsequently discarded. The new edition has an even more aggressive design, with a completely level upper edge on the device. The result is a significantly greater expansion effect by the diffuser, raising the low pressure region behind the car.

This can only be achieved, however, if airflow remains attached to the more steeply inclined surface along the centre of the diffuser. This is aided by a series of vortex generators at the base of the diffuser, but these were also present previously on the SF70H. Therefore, it is interesting to note that, with the floor slots now directed further inboard, it is possible that the innermost vortex shed will, as a high energy flow, be used to assist these generators in energising the boundary layer beneath the centre of the diffuser.

McLaren introduced a new front wing for the United States GP, which the team has hailed as an important step, not for this season, but for next year’s car development. We have reached the time of year when almost everything being put on the current cars is with a view to validating future concepts, and this is exactly what McLaren has done.

The most significant change concerns the inboard section of the front wing, where two slots have been added to the most rearward elements of the mainplane. Usually, when we refer to slots in a wing section, the purpose is to reduce airflow detachment for more consistent downforce and lower pressure drag. However, in this case, there were already multiple elements along this portion of wing, so this is probably not the primary reason for the development.

Instead, the team is focusing on improving the Y250 vortex, which is shed as a result of the step change in wing loading between the FIA-mandated neutral section (this section extends 250mm along the car’s y-axis/side-to-side axis), and the front wing’s mainplane.

Adding additional slots in the wing will actually reduce the pressure differential either side of the mainplane, as high pressure air from above one element will pass beneath the next element. Therefore, the Y250 vortex may well be weaker as a result.

The reader should note, however, that McLaren introduced new bargeboards in Malaysia, with an additional outwardly shaped mini-element, ahead of the main part. As a result of this, the greater outwash of the bargeboards could be used in tandem with a weaker Y250 vortex to achieve the same controlling of the front tyre wake.

Given that vortices are highly drag inducing flows, and that the Y250 rotating flow is a strong one thanks to the severity of the step change in wing loading, reducing its strength without harming rearward airflow would improve the aerodynamic efficiency of the MCL32.

Elsewhere, note the addition of a further slot in the inner footplate of the front wing, just inboard of the endplate. The slots in this area allow flow from above the wing to pass beneath it, into the path of the expanding front wing arch, a fundamental tool in directing air around the front tyre. McLaren’s decision to introduce more of them will enable the team to direct flow into the arch more precisely.

Finally, the trio of winglets behind the cascade have had their geometry revised, in order to attempt to direct air exiting the wing upwards as much as possible, lowering the area of tyre with which air collides, altering the footprint of the tyre wake for greater rear downforce.

Renault struggled in both Malaysia and Japan, with competitor teams introducing Aerodynamic updates, while few were brought to the R.S.17. In the last two races, however, it appears as if the team has made a step forward in performance, with Q3 being reached at both events.

New bargeboards were introduced for Austin, but not run competitively, before being put back on the car for the majority of the Mexican GP weekend, including qualifying and the race.

The difference between the new and old versions centres around the low height vertical elements attached to the bargeboard footplate. The new version features four outboard elements, with the single old one being doubled up, and two further mini-devices being introduced.

Each of these parts increases the ability of the bargeboards to direct their outwash into key areas that will provide the most benefit in terms of diverting the front tyre wake as far outboard as possible for improved rearward Aerodynamic performance.

Having introduced a heavily upgraded front wing for the Japanese GP, Sauber brought a further development to this device for Mexico. The innermost vertical fin has been completely re-profiled, now being slightly resemblant of that on the Ferrari.

Most notably, the part’s orientation is now much more aggressive in the outboard direction, while a V-shaped cut-out has been introduced into the top edge of the fin. 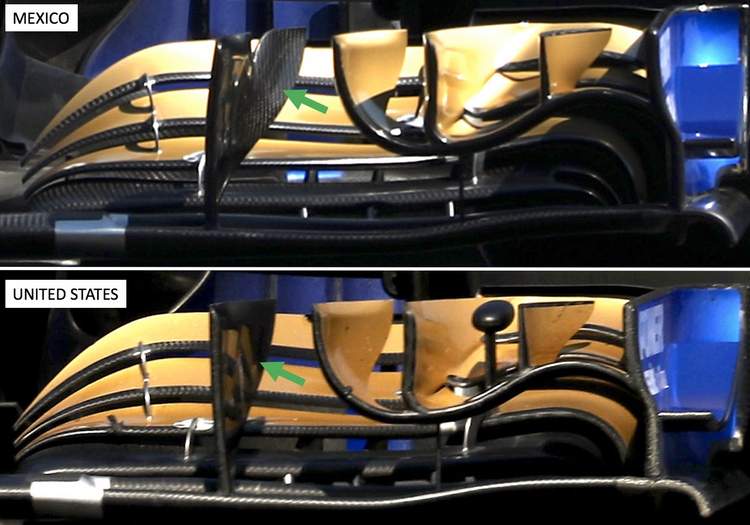 The result of this will be the production of two vortices, one at the trailing edge, and the other at the step change in height of the device. These vortices will have differing degrees of outboard orientation, with the forward vortex appearing to be directed just inboard of the front tyre, as was the case with the single old vortex, while the secondary rotating flow will pass around the front wheel.

In this way, Sauber is drawing as much airflow as possible around the front tyre, in both directions, for lower turbulence further back. While the part was tested in practice, competitive sessions saw the return to the old version, suggesting that the development was not wholly successful, requires more set-up tuning, or was simply a development idea for 2018.

After introducing a new rear wing in Japan, Williams has been quiet on the development front in the last two races, although a new rear wing endplate was brought to Mexico. It concerned the louvres in the upper section of the part, which are aimed at equalising the pressure differential either side of the endplate (high pressure inboard, ambient pressure outboard) for lower vortex drag.

In order to optimise this concept, Williams has moved from an open-louvred to enclosed-louvred set-up, maintaining the same number of slots (five). This is the opposite direction in which the team went in Hungary this year, on their medium downforce wing, although it is not unusual for different wings to have different louvre concepts, with Ferrari being the best example.