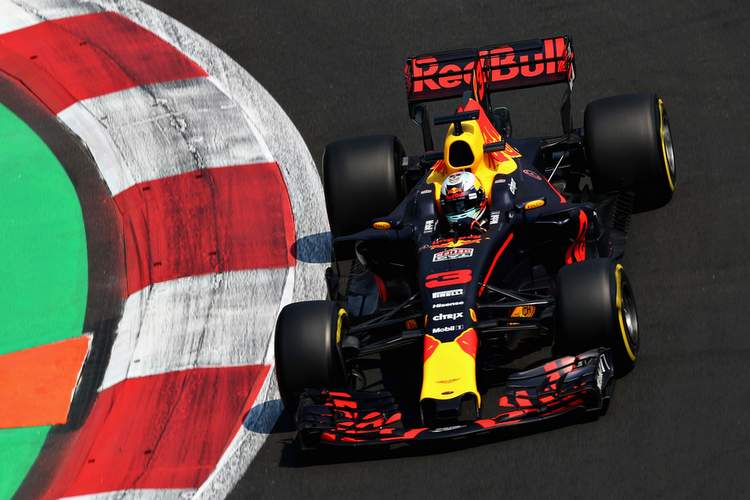 Ricciardo’s best time of 1:17..801 was set in the first half of the 90 minutes session using the yellow band Pirelli soft tyres, suggesting that the Red Bull is well suited to the high altitude Autodromo Hermanos Rodriguez. His race simulations were also strong.

Ricciardo summed up his afternoon, “It’s always nice when you top a session. We have been chipping away at it. On the long runs I still think we could find a bit more. On low fuel we are more or less there. Mercedes always have more on Saturday so I think we still need to find a few tenths if we want to stay ahead of them.

“I feel we can be a bit better on race pace and I think we can improve a few things. I think these last three races will be pretty close between the top three teams,” added the Australian.

His teammate Max Verstappen was third fastest, but his session ended early as he suffered an engine problem. However team chief Christian Horner revealed that it was not the Dutchman’s race engine, therefore penalties are not likely.

Despite the mishap Verstappen was upbeat, “I think the pace is good of the car. I didn’t do many laps in the morning as we tried some new bits for next year. We lost a bit of momentum with the early finish and then this afternoon we were chasing a bit the car balance. But even when not happy with the car balance we were still third. We had a engine failure but it’s an old engine so should be OK.”

Splitting the Red Bull duo on the timing screens was the Mercedes of Lewis Hamilton, the championship leader 0.131 of a second shy of the top time. He was using supersofts for his hot lap run. Notably his long runs were impressive.

Sebastian Vettel was fourth fastest, a quarter second down on the benchmark time, as Ferrari did not appear to fully find the sweet spot on the opening day. The German experienced a fire extinguisher problem during one of his stints. Kimi Raikkonen was fifth, a tenth down on his teammate.

Vettel said afterwards, “I think our car is fine. We didn’t get a smooth session with the extinguisher bursting on one run. I think overall it’s OK but we have some work to do. Long runs were so-so. I was stuck in a lot of traffic. I think it was OK but we need to improve.”

After topping FP1 in the morning, Valterri Bottas finished the afternoon session sixth fastest and half a second shy of the top time.

Fernando Alonso in the McLaren impressed once again, this time he was best of the rest in seventh place, ahead of local hero Sergio Perez who was eighth in the Force India.

Renault driver Nico Hulkenberg was the only other driver within a second of Ricciardo’s time, ending the day ninth fastest. The French team’s ‘new boy’ Carlos Sainz was 11th, a quarter of a second down on his teammate.

Esteban Ocon rounded out the top ten in the other Force India, his team doing a good job to get his car repaired between sessions after Alfonso Celis slammed it into the wall during his morning stint in the cockpit.

Rookie Brendon Hartley had a much improved session in the Toro Rosso, finding over two seconds between FP1 and FP2. But it was disappointment for teammate Pierre Gasly who was sidelined for most of the session with an engine issue.

This meant little running on the day for the Frenchman, who missed the United States Grand Prix to run in the Japanese Super Formula finale at Suzuka, and also sat out FP1 while Sean Galeal did duty in his car.

Romain Grosjean was again victim of misfortune (remember Malaysia) when the left rear Pirelli on his car de-laminated and blew early on in the session. The Frenchman did b=not rejoin the action, managing only three timed laps before the incident. Prior to which he had not set a meaningful time 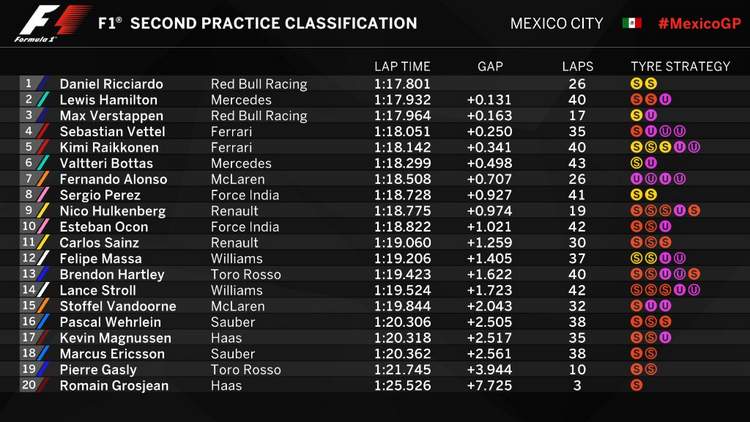