Hamilton: I am not better than Senna because I have more wins 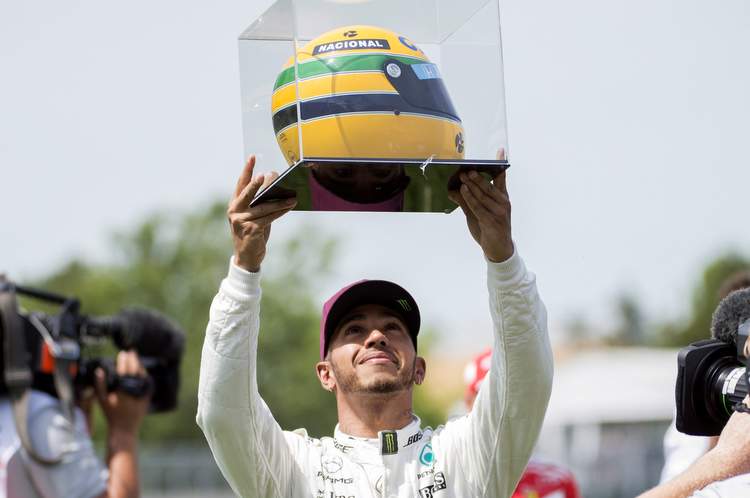 Lewis Hamilton says winning a fourth Formula 1 world championship title would not make him better than his boyhood hero Ayrton Senna, the Brazilian whose death as a triple champion in 1994 rocked the sport.

The Briton has already exceeded Senna’s career tally of race wins, podiums and pole positions and success in Mexico on Sunday would make him only the fifth driver to claim four championships.

“Ayrton’s life was cut short and I think had he the opportunity to continue and race in safe conditions he would have continued to win more championships,” the Briton told reporters on Thursday.

Senna was 34 when he died in the San Marino Grand Prix at Imola.

“I don’t look upon him and think that I am better because I have more wins and championships and poles, but I feel very proud for my name to be mentioned alongside his name and that’s all.”

Hamilton, who grew up idolising Senna, will become the first Briton to win four championships and is also by far the most successful in terms of race wins.

He has already taken seven times world champion Michael Schumacher’s records for most pole positions and front row starts and is now 29 wins away from equalling the German’s all-time record of 91 victories.

Some believe he could one day match Schumacher’s championships.

Unlike former team mate Nico Rosberg, who won last year’s title and promptly retired, Hamilton could be around for some time yet.

“I can easily imagine myself without Formula 1, but it is not about that right now,” he said. “There are some really cool things coming along that are going to complement where I am in Formula 1.”

He would not give any further details about that, but said he had been in meetings in Los Angeles earlier this week to discuss “some creations” he had been working on.

“I definitely won’t be here at 40. I don’t think that is going to happen. It changes all the time,” added the 32-year-old.

“There have been times where I thought I am happy to move on but you can’t come back. I can’t tell you how long I will be here for, but eventually I will figure it out and know when the time comes. I anticipate a couple more years at least.”

Hamilton said he had come a long way since his first title with McLaren nine years ago.

“It’s actually been more enjoyable this year being in the position I am. A lot more comfortable in my own skin.”