Lauda: Thank you to everyone at Brackley and Brixworth 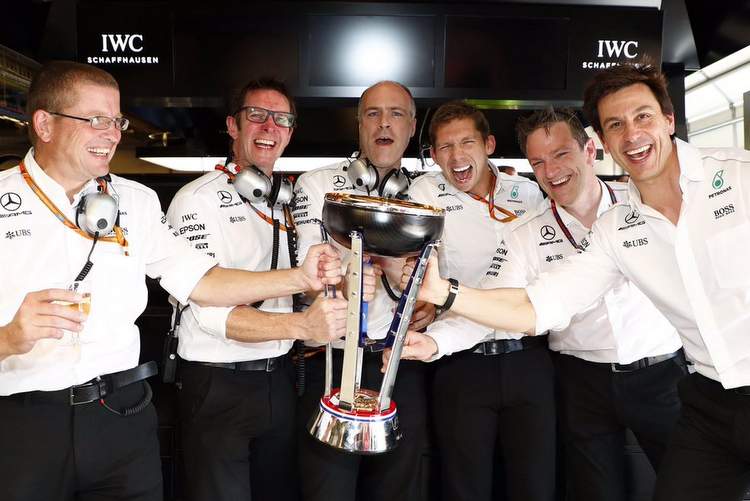 Mercedes bosses Niki Lauda and  Toto Wolff were ecstatic as their team wrapped up the 2017 Formula 1 World Championship for constructors, after Lewis Hamilton and Valtteri Bottas finished first and fifth at the United States Grand Prix.

With three races remaining in the championship Mercedes have amassed 575, which is 147 more than their closest rivals Ferrari, and with it did enough to secure the title for a fourth consecutive year.

Formula 1 legend Lauda declared after the race at Circuit of the Americas: “Thank you to everyone at Brackley and Brixworth. Together we made it. An unbelievable result and I’m really happy. It was touch and go two stop or one stop. Lewis had everything under control, maybe Bottas could have used another strategy but it doesn’t matter. For us a fantastic result.”

Wolff had this to say: “I’m so happy. The gang in Brackley and Brixworth have done a fantastic job, 24/7 and so much sacrifice.  It’s just a new reality. We had a few good years with a power unit advantage and now everybody has closed up. You can see that Red Bull is very much there at the end. This is the new reality and how it will go for the rest and probably next season.”

“Lewis is really on top of his game at the moment. Since the summer he has made no mistakes, been quick on the Saturdays and today his tyre management was great.”

“But it’s been the whole group that has made the car quick, made it reliable and Lewis has been perfect in the execution. It is the first time in many seasons that strategy was not obvious. Ferrari could have caught up much more and we didn’t have much data if the soft would last to the end.”

“I think there is no silver bullet. In years where you are competitive, everything just needs to come together – the right work ethic, the right resource and also the right mindset. You need to stick by your values and stick by your word and maybe Hungary helped.”

“So many people have contributed, Paddy in the past and Ross before as technical directors. James Allison is like my total opposite twin brother. He is so different, comes from the different spectrum. But we have the same thinking and values and is just fantastic to work with.”

“It’s normal development that people will poach from the good teams. But we enjoy coming to work and this is what we do, we stick to our values and have clear objectives, a passion for what we do and accountability. It all comes together and what makes this place so special at the moment.”

“We can see the fat lady backstage preparing,” concluded Wolff.