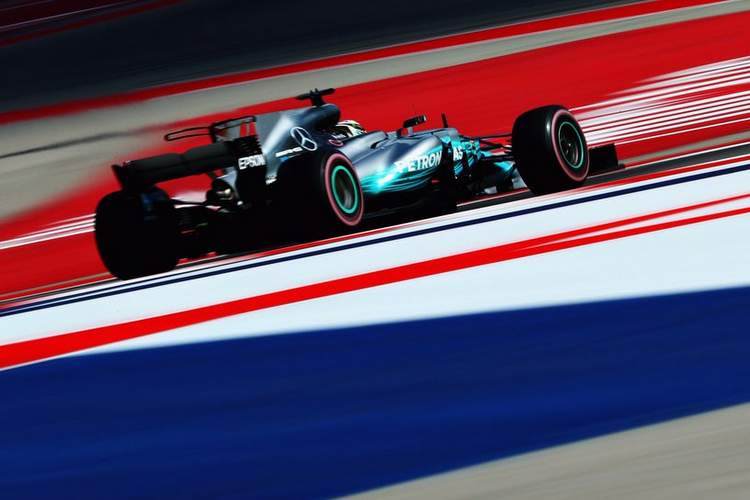 Mercedes driver Lewis Hamilton made it a clean sweep of free practice sessions, as he topped the timing screens in the third and final FP3 of the United States Grand Prix, with Ferrari’s Sebastian Vettel less than a tenth of a second shy of the top time, setting the stage for an intriguing qualifying shootout.

Hamilton’s best lap time of 1:34.478 was a mere 0.092 of a second up on Vettel, very little separating the title contenders and thus setting the scene for an intriguing qualifying session.

Mercedes’ Valtteri Bottas was 0.214 of a second adrift of the top time, the Finn finding some pace overnight after spending most of Friday around six tenths down on his British teammate.

Fellow countryman Kimi Raikkonen was fourth quickest in the other Ferrari, the top four separated by a tad over a quarter second.

Max Verstappen was fifth fastest in the Red Bull, albeit six tenths down on the benchmark time, while teammate Daniel Ricciardo who focused on long runs throughout the session down in ninth.

Felipe Massa and Williams hit good form at Circuit of the Americas, the Brazilian posting the sixth best time. Rookie Lance Stroll, racing in Austin for the first time, was 12th and eight tenths shy of his veteran teammate.

Next up, in seventh and eight respectively were the Renault pair, with Nico Hulkenberg edging Carlos Sainz by four hundredths of a second.

Force India’s Sergio Perez rounded out the top ten, with teammate Esteban Ocon a tenth of a second slower in 11th.

Formula 1 debutant Brendon Hartley ended the one hour session in 15th, while his teammate Daniil Kvyat endured technical issues which curtailed his running to only three laps.

In a deviation from the norm, there are four hours between the end of this FP3 session and qualifying as organisers tweaked the schedule in the hope more people at the track will attend the Justin Timberlake concert in the evening. 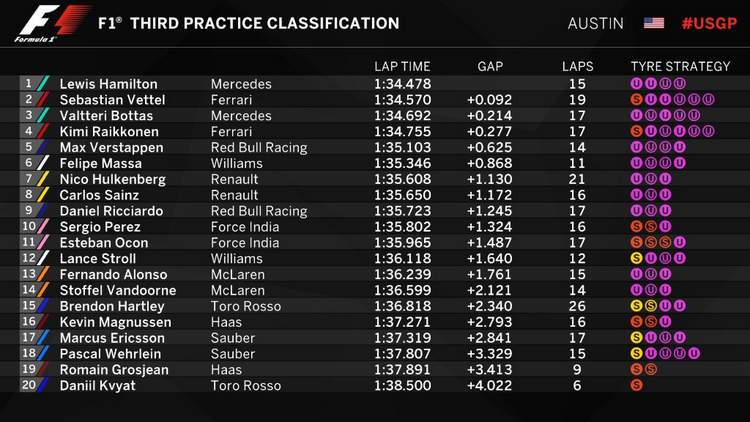