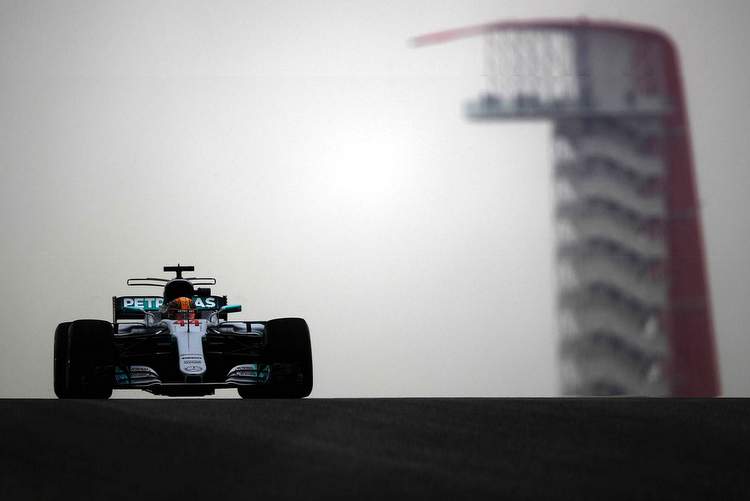 The first free practice session of the United States Grand Prix weekend got going with drizzle and dark clouds over Circuit of the Americas, the track dried up but remained slippery and in the end it was the two title contenders who topped the timing screens at the end of the 90 minutes session.

World Championship leader Lewis Hamilton ended the morning fastest of all with a best time of 1:36.355. Mercedes set the early pace until Ferrari driver Sebastian Vettel split the Silver Arrows, setting the second best time albeit 0.593 of a second down on the benchmark time.

Valtteri Bottas was third quickest in the other Mercedes, 0.644 of a second down on the top time.

Max Verstappen, fresh from extending his Red Bull contract until 2020, was fourth fastest, ahead of McLaren’s Stoffel Vandoorne and the Williams driver Felipe Massa in fifth and sixth respectively.

Notably none of the top four used the Pirelli ultrasofts, which for this race feature a pink band as part of F1’s breast cancer awareness project.

Kimi Raikkonen was seventh, three quarters of a second down on his Ferrari teammate.

Next up were the Force India pair of Esteban Ocon eight fastest and Sergio Perez ninth, a mere five hundredth of a second separating the two pink cars on the timing screens.

Carlos Sainz was impressive in his first session as a Renault driver, ending tenth on the timing sheets, eight tenths of a second op on teammate Nico Hulkenberg. A solid arrival for the Spaniard in his new team.

Formula 1 debutante Brendon Hartley covered more laps than any of the other drivers as he familiarised himself with the Toro Rosso. Despite an issue with his helmet, he impressed, setting the 14th best time.

The WEC champion and Le Mans winner was 1.2 seconds faster than Sean Galeal, who stood-in for Daniil Kvyat, in the sister car. The Russian will be in the cockpit for the rest of the weekend.

Daniel Ricciardo was one of several drivers who had an off-track excursion during the session. He ended 16th but did not have a meaningful stab at setting a dry tyre time in the Red Bull.

Fernando Alonso did no timed laps as a hydraulic leak kept his McLaren in the garage for most of the session.

Ferrari protege Charles Leclerc was on FP1 duty for Sauber in place of Pascal Wehrein. Ended the session 19th. 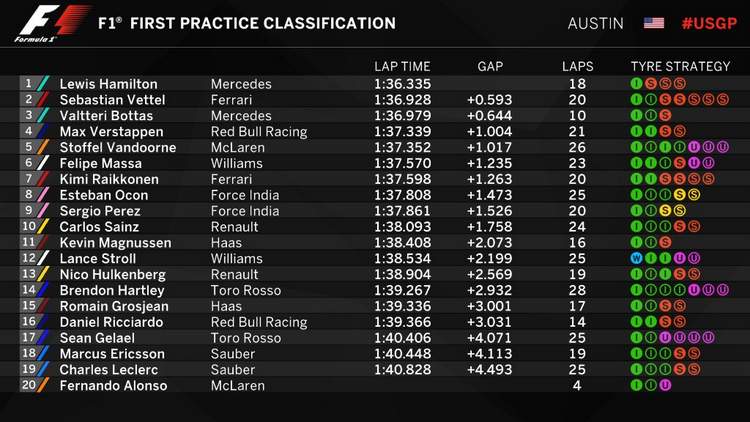