Gasly: We’ll try everything to win the Super Formula title 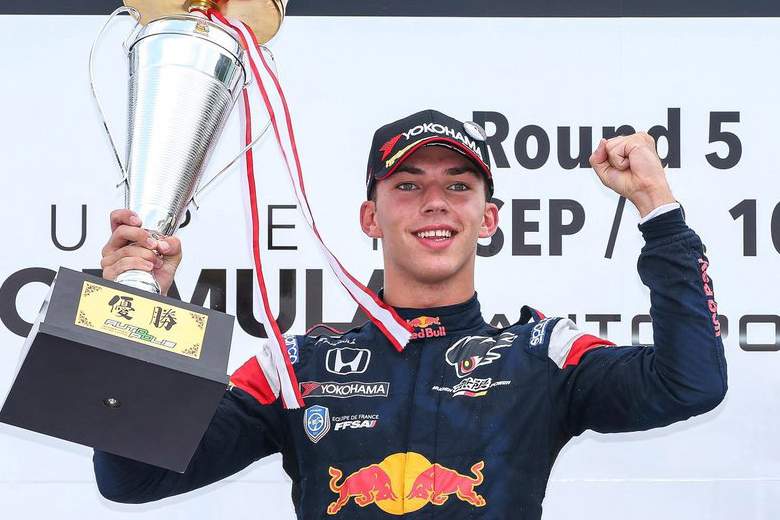 Two races into his Formula 1 career, Toro Rosso driver Pierre Gasly will sit out the United States Grand Prix as he attempts to win the Japanese Super Formula championship this weekend at Suzuka, which the Frenchman will tackle with determination while confirming that his brief experience at the pinnacle of the sport way crazier than he imagined.

Speaking ahead of the final Super Formula weekend at Suzuka, Gasly wrote on his GPUpdate column, “I’m excited about Super Formula this weekend. It’s always exciting to fight for the championship at the last race, so it’s a bit similar to last year in GP2!”

“I think at the moment, definitely looking at the last few races, we’re in good shape. I feel good in the car, we’ve made progress with the car, we should hopefully be fast at Suzuka, and we’ll try everything to get it.”

Gasly will line up for the Honda backed Team Mugen and trails championship leader Hiroaki Ishiura ahead of the two points scoring rounds that awaits him this weekend at Suzuka.

But Gasly is wary of the task at hand, “It’s not going to be easy as Hiroaki Ishiura was fast at the first race in Suzuka and also Toyota is usually slightly better than us at Suzuka, but if we manage to do everything right and just work on ourselves, and have a smooth weekend, we will have our chance.”

Gasly was unexpectedly drafted into the Toro Rosso team for the back-to-back Malaysian Grand Prix and the Japanese Grand Prix earlier this month.

Of his two races in Formula 1, the 21 year old wrote, “In terms of my first Formula 1 experience, as an official driver, it’s probably even crazier than what I thought.”

“You’re just so busy during the weekend that it’s even more than what I expected, you don’t have five minutes to yourself just to rest, you’re going from one place to another one, from one meeting to another, engineers, media, then you need to eat, basically it’s really intense – they’re intense weekends.”

“In terms of driving it’s been fantastic because these cars, especially the new ones, are amazing to drive, they’re super quick, especially around Suzuka in the first sector – it was just amazing, a lot of pleasure, basically it was just a pure joy, all weekend. I was just so happy from Thursday until Sunday, I was even more in love with Formula 1 after these two weekends!”

“I was also racing guys I’d watched on TV as a 10-year-old. It was quite insane, but it was really cool as well. It was a dream when I was a kid, since I started karting, to be in Formula 1 as well, to make it.”

“I was watching all the races with Fernando Alonso, with Lewis Hamilton, with Sebastian Vettel, Kimi Räikkönen as well, all these guys. In Malaysia to be with them was in a way a bit funny, but then after when you’re racing, as a racing driver, as soon as the lights switch off you’re just thinking about the performance and what you need to do in the car to make your result better, and you don’t really think about who you’re racing with!”

“But, definitely, to be in the weekend with all the media stuff with them, and all these things, is quite special. I’ve been enjoying it, it has been really good and they’ve been amazing experiences, it’s just as I said… it made me love Formula 1 even more!” added Gasly who is expected to be back with Toro Rosso for the final three races of the season in Mexico, Brazil and Abu Dhabi.

Big Question: Did Gasly do the right thing to skip the United States Grand Prix and focus on winning the Super Formula championship?